ABC News announced special coverage of the one-year anniversary of the attack on the U.S. Capitol documenting that consequential day in history and providing an in-depth look at the aftermath. "Attack on the Capitol - One Year Later" programming will air across ABC News, beginning Sunday, Jan. 2, and continuing with daylong coverage on Thursday, Jan. 6. World News Tonight anchor David Muir will lead coverage and has already conducted the first sit-down interview with three of the officers who testified during the congressional hearings on the Jan. 6 attack – Capitol Police officers Harry Dunn and Aquilino Gonell, and Metropolitan Police Department officer Daniel Hodges. It was their first time sitting down together for an interview since their testimony on Capitol Hill and will air on World News Tonight with David Muir on Jan. 5, and Nightline. 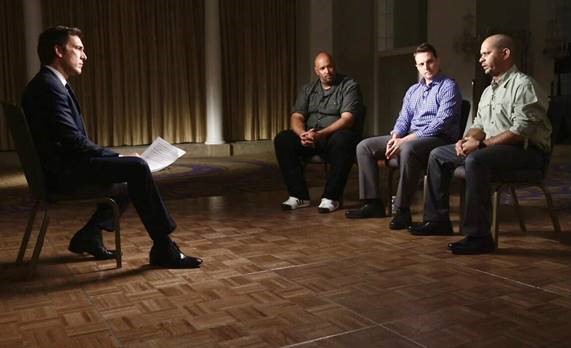 Coverage begins with This Week with George Stephanopoulos beginning Sunday, Jan. 2,  including anchor George Stephanopoulos' interview with Jan. 6 committee ranking member Rep. Liz Cheney (R-WY), chief Washington correspondent and "This Week" co-anchor Jonathan Karl on Jan. 6 and its aftermath, and chief global affairs correspondent and "This Week" co-anchor Martha Raddatz, who reconnects with a participant she met during the Capitol riots and examines the rise of military extremism since Jan. 6. The program will also unveil new findings from a new ABC News/Ipsos poll on where we are as a country following the attack.

"Good Morning America," "GMA3: What You Need to Know" and "Nightline" will dedicate coverage to the anniversary on Thursday, Jan. 6, with "Nightline" co-anchor Juju Chang anchoring from Washington, D.C. "The View" will discuss the latest headlines on the events of Jan. 6 during a Hot Topics conversation. Guests on Thursday's show include Bob Woodward and Robert Costa (authors, "Peril").

ABC News Live will present retrospectives from ABC News correspondents and producers who were covering the attack in 2021. Coverage will also feature roundtables and interviews with families and communities grappling with the outcome of that day. "ABC News Live Prime" with anchor Linsey Davis will revisit how Jan. 6, 2021, impacted some families, as children who turned their parents in are now trying to pick up the pieces. Correspondent Mireya Villarreal is set to speak with a group trying to build back their lives and family bonds.

The documentary "Homegrown: Standoff to Rebellion" will provide a look at the days, events and conversations leading up to Jan. 6, 2021, from the eyes of anti-government groups, with interviews from Ammon Bundy, a former Oath Keeper, extremism experts and several ABC News correspondents who were at the Capitol that day. The ABC News Investigative Unit-produced documentary will begin streaming Wednesday, Jan. 5, on Hulu, and on Jan. 6 on ABC News Live.

ABC News Digital will feature comprehensive coverage and analysis featuring video content, photo slideshows and articles on what we learned since the riot, key players who were not held responsible and more. Scott, whose first day in her current role was Jan. 6, will also detail her experience in a "Reporter's Notebook" on ABC News' website. FiveThirtyEight will cover the anniversary with a series of essays on Jan. 6 exploring how the nation has and hasn't changed since the attack on the Capitol and more.