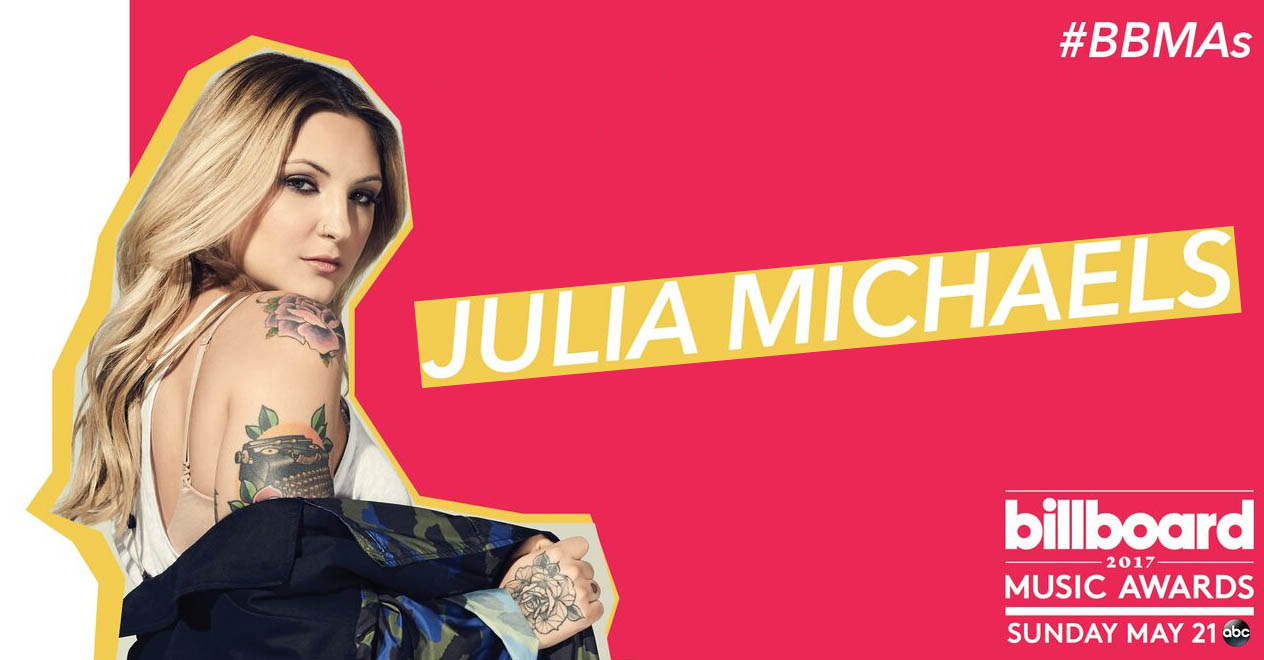 dick clark productions and ABC today announced that chart-topping songwriter and breakthrough recording artist Julia Michaels will perform her debut single "Issues" on the 2017 Billboard Music Awards. While a newly minted recording act, "Issues" is the ninth Top 40 hit that Michaels has co-written on the Billboard Hot 100, and her first as a solo artist.

T-Mobile presenters DJ Khaled and Bebe Rexha will welcome Michaels to the stage and provide fans with an inside look to the BBMAs throughout the evening. Fans can keep up with and join the conversation by using #BBMAsUnlimited. This year's show will broadcast LIVE on BOTH COASTS from T-Mobile Arena in Las Vegas on Sunday, May 21, at 8:00 p.m. EDT|5:00 p.m. PDT on ABC.

Quickly becoming one of 2017's most successful new artists, Julia Michaels' debut single, "Issues," has been certified platinum by the RIAA in the U.S. with global consumption approaching 3.5 million. Michaels recently shared an acoustic version of "Issues" that quickly amassed over 1.5 million streams on Spotify, with a total of 4.5 million streams on the platform. A breakthrough debut, "Issues" is the best-selling song by a new artist released in 2017, according to Nielsen Music. It is also the highest on-demand audio streaming song by a new artist released this year.

"Issues" is the best-selling song by a new artist released in 2017 and recently hit #4 on both the iTunes Top 200 Songs Chart and US Top Pop Songs Chart. At radio, it's Top 10 at Top 40 and is currently Top 20 at Hot AC.  Julia became the first new artist of the year whose debut single reached 100 million streams.  The song entered the Top 10 on Spotify's Global Top 50 Chart and reached Top 15 on the US Top 50 Chart following its debut at #1 on the US Viral 50 Chart and #2 on the Global Viral Chart. What's more, the single is Top 10 on iTunes in 46 markets worldwide, has been certified 2x platinum in Sweden and Norway, and certified platinum in Australia, Netherlands and Canada. Michaels recently shared an acoustic version of "Issues" that quickly amassed over 1.5 million streams on Spotify.

VEVO recently named Julia Michaels its latest "DSCVR Artist." She joins the likes of previous DSCVR stars such as Sam Smith, James Bay, and Alessia Cara. Critical applause remains unanimous. Billboard named her among its "Artists to Watch in 2017," Apple proclaimed her a "New Artist of the Week," and Forbes placed her on its "30 Under 30: Music" list. Meanwhile, Entertainment Weekly pegged her forthcoming album as part of its "Most Anticipated Albums of 2017," with Rolling Stone naming her one of their "Artists You Need to Know," and Stereogum hailing "Issues" as "the first great pop single of 2017."

Previously to releasing her debut single, Michaels solidified herself as one of pop music's most in-demand songwriters, co-writing a string of Billboard Hot 100 hits alongside Justin Tranter - including inescapable smashes like Justin Bieber's "Sorry," Selena Gomez's "Good for You" [feat. A$AP Rocky], Hailee Steinfeld's "Love Myself," and more.  "Issues" marks the ninth Top 40 hit Julia Michaels has co-written on the Billboard Hot 100, and her first as a solo artist.

T-Mobile Magenta Carpet Live at the BBMAs, the official pre-show for the 2017 Billboard Music Awards, will be LIVE from the Magenta Carpet at T-Mobile Arena in Las Vegas on Sunday, May 21 from 6:00 p.m.-8:00 p.m. EDT|3:00 p.m.-5:00 p.m. PDT. The two-hour pre-show will be available worldwide to logged-in and logged-out audiences on Twitter and connected devices, and can be found at BBMAs.twitter.com or via @BBMAs. Sirius XM's Sway Calloway, Jessie James Decker, AJ Gibson, Jeannie Mai and Shane Harper will host the T-Mobile stages, while Chris Daughtry and Laura Marano will host the Xfinity Stage.

Tickets are now on sale for the 2017 Billboard Music Awards. Note, not all performances noted above will originate from the T-Mobile arena. To purchase tickets online, fans should go to www.axs.com or www.t-mobilearena.com.