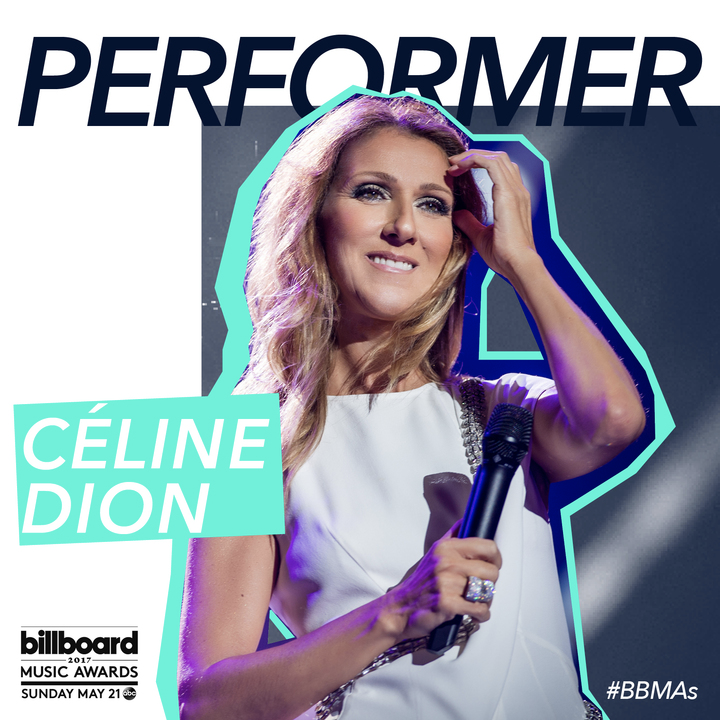 dick clark productions and ABC today announced that seven-time Billboard Music Award-winning artist and current Las Vegas resident Céline Dion will perform her colossal hit, "My Heart Will Go On," at the 2017 Billboard Music Awards. This year marks the 20th anniversary of the emotional and powerful ballad, which became the anthem of one of the top-grossing films of all-time, "Titanic." The film's soundtrack hit No. 1 on the Billboard 200 chart and was named Soundtrack Album of the Year at the 1998 Billboard Music Awards. "Titanic"'s most lauded single, "My Heart Will Go On," received numerous accolades, including an Academy Award for Best Original Song and Golden Globe Award for Best Original Song – Motion Picture. The song reached No. 1 in several countries, including Canada, Ireland, the United Kingdom and Australia. It also was a monster hit on Billboard's charts in the U.S., reaching No. 1 on the Billboard Hot 100, Adult Contemporary Pop Songs and Radio Songs charts, and spent a total of 20 weeks on the charts. At this year's awards show, Céline's powerful voice and commanding presence will once again bring the song to the forefront via an unforgettable live performance. The 2017 Billboard Music Awards will broadcast LIVE from T-Mobile Arena in Las Vegas on Sunday, May 21 at 8:00 p.m. EDT|5:00 p.m. PDT on ABC.

"This song means a lot to me, and it has played such a huge role in my career," said Dion. "I'm so grateful to the late James Horner, and to Will Jennings, for writing it and creating the opportunity for me to be part of Titanic, an amazing film whose legacy will continue for generations to come. It's a great honor to have the opportunity to perform it on the Billboard Music Awards' international stage, in celebration of the film's 20th anniversary."

"We are thrilled that Céline Dion has chosen the Billboard Music Awards to pay tribute to the 20th Anniversary of her Oscar – winning 'Titanic' hit, 'My Heart Will Go On,'" said Mark Bracco, executive producer, 2017 Billboard Music Awards.  "Twenty years later, this timeless song still resonates with a global audience of music and movie fans alike. It's going to be a performance to remember – and there won't be a dry eye in the house."

Nobody could have suspected that the birth of Céline Dion on March 30, 1968, in Charlemagne, Québec, marked the arrival of one of the world's greatest singers. At the age of 12, her ambitions began taking form when she wrote her first song with her mother, Thérèse, and her brother, Jacques, entitled "Ce n'était qu'un rêve." That song would lead her to meet the man who would transform her dreams into reality, manager René Angélil. Céline made her first TV appearance on June 19, 1981, on Michel Jasmin's talk show. Charmed by the young prodigy, lyricist Eddy Marnay subsequently wrote her first hit, "La voix du bon Dieu." Next, Céline's talent was confirmed with her first international recognition, winning a gold medal at the 13th Yamaha World Popular Song Festival in Tokyo. 1983 would bring her first array of awards: the first in a long line of gold records in France and four Félix awards at the Gala de l'ADISQ, a trophy she has won 43 times, a record to the present day. Then, Céline was presented with the unique opportunity to sing "Une colombe" for Pope John Paul II in an utterly packed Olympic Stadium. The entire world discovered the young singer from Québec thanks to that performance.

The album "Incognito" was the transformational moment, also marking her first partnership with Luc Plamondon. After winning the 1988 Eurovision contest in Dublin before 600 million TV viewers, Céline took on the American market. Her first English album, "Unison," was released in 1990 and certified gold. The song "Where Does My Heart Beat Now" reached #4 on the prestigious Hot 100 Billboard chart.

While 1991 delivered the gold record "Dion chante Plamondon," the year was also marked by the extraordinary theme song to Walt Disney film Beauty and the Beast. Thanks to the global smash success of her duet with Peabo Bryson, Céline won a Grammy Award and her performance resulted in writer and composer, Howard Ashman and Alan Menken, winning an Oscar. The album "The Color of My Love" was released in 1993 and crowned with success. In 1995, Céline launched the masterpiece "D'eux." That collaboration with Jean-Jacques Goldman produced the smash hit "Pour que tu m'aimes" encore, with "D'eux" becoming the biggest francophone album of all time, selling 10 million copies.

During the Opening Ceremonies of the Olympic Games in Atlanta in 1996, Céline performed "The Power of the Dream" and beat her own previous audience record: over 3.5 billion TV viewers. The following year, Céline became the first artist to perform two songs during the Oscars: "Because You Loved Me" and "I Finally Found Someone." Those ceremonies would be the prelude to one of the most famous film songs of all time, "My Heart Will Go On," released that same year on the album "Let's Talk About Love." Returning to the Oscars- the following year, Céline's interpretation of "My Heart Will Go On" for the movie Titanic won the trophy for Best Original Song. The same year marked the release of the album "S'il suffisait d'aimer." The world tour "Let's Talk About Love" was an unprecedented triumph, culminating in two performances in the Stade de France in Paris for 180,000 fans.

In 2002, a new album entitled "A New Day Has Come" was released, introducing the most ambitious project of that era: a show directed by Franco Dragone in a 4,000-capacity theatre in Las Vegas conceived specially for Céline. The show "A New Day…" was a genuine showbiz revolution, with over 700 sold-out performances for 3 million spectators from 2003 to 2007.

In addition to the concerts, the albums "One Heart," "Une fille & 4 types," "A New Day… Live in Las Vegas," "Miracle," "D'elles," the compilation "On ne change pas" and "Taking Chances" were all released during her residency. Céline returned to the road in 2008 with the Taking Chances tour: 5 continents, 23 countries, 93 cities and 3 million cheering spectators. That tour would take her to the Plains of Abraham to celebrate the 400th anniversary of Québec City in front of 250,000 people. Then came her triumphant return to the Colosseum in Caesars Palace with her show, Céline, which has since reached an epic milestone of over 1,000 performances.

In November 2012, Johnny Halliday, Jean-Pierre Ferland and Henri Salvador joined her on the album "Sans attendre. "Anglophone fans weren't left out, as Céline followed up with "Loved Me Back To Life," topping the iTunes charts in 44 countries, also hitting #2 on the Billboard Top 200.

And in July 2013, Céline once again visited the Plains of Abraham for the event "Céline… une seule fois." On January 14, 2016, after a long battle, René Angélil passed away peacefully surrounded by his loved ones. Céline returned to the Colosseum stage on February 23, 2016 and moved the entire world with her courage and strength. But no event better illustrated Céline's spirit than the "2016 Billboard Music Awards," where she performed "The Show Must Go On," later receiving the Icon Award in recognition of her entire career from her son René Charles.

The second half of 2016 witnessed a sold out 28-show tour of Belgium, France and Québec followed by the release of the album "Encore un soir," with the Dion-Goldman partnership returning triumphantly in the title track. And 2017 has opened with a bang for the singer, who kicked it off with the launch of the Céline Dion collection, a line of handbags and accessories. Céline was also mentor for Gwen Stefani's team on NBC show "The Voice," in addition to performing How Does A Moment Last Forever on the soundtrack of the new version of the film "Beauty and the Beast." And since Céline lives for the stage, she is currently preparing a new tour of 25 large-scale shows that will take her to 16 of the greatest cities in Europe.