Derrick Storm returns in the best-selling graphic novel saga, based on the world of ABC’s hit primetime series.

Derrick Storm is back and he has a new, deadly case to solve. When the daughters of four high-powered international businessmen are discovered dead in New York, the NYPD scrambles to bring the murderer to justice. But when a fifth girl is found mutilated in a pool of her own blood, her prestigious French family hires Derrick Storm to run his own investigation and find the real killer. Storm has only one lead - a strange symbol drawn in blood. Storm enlists the help of the beautiful and daring Clara Strike, his CIA handler. Together they uncover a deep web of deception under the guise of mysticism and devotion.

“We are incredibly excited to, once again, be partnering with marvel to bring Richard Castle’s early literary works to life,” said Andrew W. Marlowe, “Castle” Creator/Executive Producer.  “It’s a great way to expand the Castle universe for all our fans.”

“We are, once again, excited to bring the Derrick Storm’s novels to life” said Axel Alonso, Marvel Entertainment Editor in Chief. “Whether you’re new to the world of Castle or a longtime fan, there’s something for everyone in CASTLE: UNHOLY STORM—and it’s the kind of book that reaffirms Marvel’s commitment to creating new fans of comic books.” 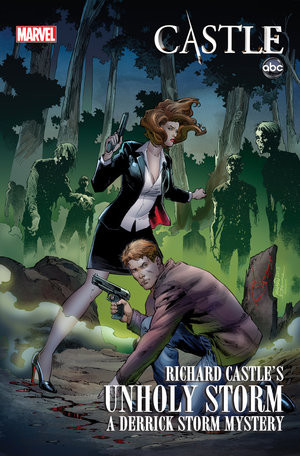