Has your heart stopped pounding yet?

Callie sings. Bailey sings. Owen sings. Alex sings. Oh my God, everyone on this show sings and sings extremely WELL... And oh my God, CALLIE WENT THROUGH THE WINDSHIELD.

Like Lexie sings those words in the OR, I was also telling (You don't want me to sing) those words to Zoanne Clack, our writer-producer-doctor, while she and I panicked about how we were going to fix all the devastating injuries that Callie suffered from in that horrible accident.

And why panic, you may ask?

Pregnancy and trauma do not make for an easy medical case—each complicates the other. One of the main challenges lies in the fact that the trauma team must provide care for two patients—the mother AND the fetus are both at risk. Also, when pregnant, the mother's body has changed in certain physiological ways that make diagnosing traumatic injuries much more difficult. Regardless of the severity of the wounds, doctors with multiple specialties will need to be involved in treatment.

When Callie arrives at the hospital, they know she's tachycardic and hypotensive with chest and head injuries.

You know how the flight attendants always say to put on your own oxygen mask before you put on the mask of a child? Same thing applies with trauma and pregnancy. Doctors always make sure the mother is stabilized first, because that will give the fetus the best chance of survival. If there are enough doctors, as in Callie's case, they can begin to check the fetus simultaneously. Callie is "tachycardic" (HER heart is beating too fast) and "hypotensive" (her blood pressure is dangerously low). Immediately, the doctors want to get her stabilized. They give Callie supplemental oxygen as soon as they can in order to prevent mom and the fetus from becoming hypoxic (deprived of oxygen). When Teddy can't detect breath sounds on the right side of Callie's chest, the team knows they need to insert a chest tube to help her breathe. Now with pregnant patients, it is extremely important to enter the chest one or two interspaces higher than usual, because pregnancy elevates the diaphragm, and you want to stick the chest tube into the lung, not into the liver or spleen. Simultaneously, our doctors check the fetus' vitals with a fetal heart monitor and Doppler.

In the Trauma Room, Bailey rushes to get the rapid infuser in order to transfuse blood and fluids into Callie's body as fast as possible. A decrease in the mother's blood pressure may result in a decrease in uterine blood flow, which can lead to disastrous results for the fetus. Meanwhile Jackson and Cristina check for other sources of internal bleeding with an ultrasound, leading them to discover blood in Callie's right upper quadrant, which is where the liver lives.

Derek saw a large scalp laceration and when he examined it, he felt that Callie had a depressed skull fracture. This can mean severe injury to the brain itself, so it was important to assess her head injuries before heading off to the OR.

Our surgeons rush Callie to CT and then to the OR for emergent surgery on her brain and abdomen.

Callie's head CT showed epidural AND subdural bleeds. Many people often question the safety of performing CT imaging on pregnant patients, but less radiation is used for head and chest CT scans. And when you have a baby past the first and second trimesters, all development has happened, and the baby is just growing. So there is less risk for developing deformities and developmental problems. Also, few alternative diagnostic tools exist that can rule out those types of injuries. When a life is at risk, it is important to do whatever needs to be done to save it.

One important surgical risk to the fetus is preterm delivery. Usually before twenty-three weeks' gestation, preterm delivery results in neonatal death. At the time of the accident, Callie is twenty-three and a half weeks along. Our doctors want to try to keep this baby from having to be delivered.

Our doctors quickly assess that Callie is bleeding too much in her abdomen. They can see that she has massive bleeding from her liver, which can in and of itself be life-threatening, but she also has multiple other injuries and bleeding that they can't find. It has been found that rather than try to repair all injuries while the patient is traumatized and unstable, it is better to stop the bleeding as soon as possible and take the patient to the ICU to stabilize them. This is called damage control. Traumatic retroperitoneal bleeds, especially during the later stages of pregnancy, can increase the intra-abdominal pressure, leading to rupture of blood vessels, and have a high incidence of fetal death. Once they pack her insides with surgical lap pads/towels, they will transfer her up to the ICU for extensive volume replacement and monitoring. Once her vitals stabilize, they will reassess returning to the operating room.

Due to the blunt trauma to her upper body, Callie also suffers from a ventricular septal defect (VSD)—a hole in her heart.

While Callie's body tries to recover in the ICU, Teddy tries to convince the attendings to return to the OR so they can repair the hole in Callie's heart. However, this type of cardiac procedure usually requires the patient to be on cardiopulmonary bypass... Which necessitates hypothermia and heparin (a type of blood thinner). The heparin could potentially cause Callie's brain to re-bleed, regardless of the repair that Derek just made in the OR, and the hypothermia could possibly harm the fetus.

But... Cristina proposes the percutaneous method of fixing Callie's heart! Rather than performing open heart surgery and needing bypass, she presents a technique in which they would thread a wire through an artery in Callie's groin and repair the VSD with a catheter. Unfortunately, Teddy rejects Cristina's idea, arguing that the procedure holds too much risk for Callie. This kind of trauma usually results from penetrating trauma (stabs, gunshots) so in Callie's case, Teddy's unsure about the percutaneous method because they can't be sure what kind of injuries they're dealing with here. She'd rather be able to see what she's doing rather than take the chance of puncturing the heart or the vessels on the way to the heart.

The doctors propose taking out the baby, even though she may be too young to survive outside the womb.

Their theory is that without the extra stress that the baby is causing on Callie's cardiovascular system, she might be able to pull through better. There's no guarantee, though, and the baby is right on the edge of viability. Steroids help to develop fetal lungs, but doctors prefer they be given at least twenty-four hours before delivery. They don't know if they'll have time to wait, but they are unclear if Callie can survive with the extra load of the fetus. Their hands are forced because Callie has an emergency before they can decide definitively one way or the other.

In the ICU, Callie's pressure suddenly starts to dangerously drop, her lungs have filled with fluid, and she's developed abdominal compartment syndrome. They need to take her immediately back to the OR.

Abdominal compartment syndrome is when the pressure in the abdomen has increased to such an extent that it threatens the blood flow to the organs. If not repaired quickly, it can disrupt gastrointestinal, pulmonary, and cardiovascular function and result in death.

In the OR, they race to find and stop the bleeding as Teddy prepares to put Callie on bypass to fix her heart the old-fashioned way. However, as soon as they start to inject the heparin, her brain starts to re-bleed, and Derek and Meredith have to go back into her brain. Teddy is forced to abandon her method and allow Cristina to quickly begin the percutaneous repair.

However, our surgeons are still struggling with stopping the bleeding in Callie's abdomen. And as she loses more and more blood, the baby's vitals also drop, as it slips further into distress. When the mother's heart stops, a very small window of time exists before the baby's heart also stops—Addison gives Richard one minute before she goes in for an emergency C-section. Richard begins massaging her heart with his hand, so his hand is functioning as her heart. He's trying to circulate blood around her body and get her heart beating again, along with medicines they are pushing through her IV. After they deliver the baby, Callie's blood volume stabilizes without the added stress. And miraculously, Arizona manages to restart the baby's heart.

NOTE: For an added bonus, check out the picture of Callie's injured body with Zoanne's preliminary medical notes... 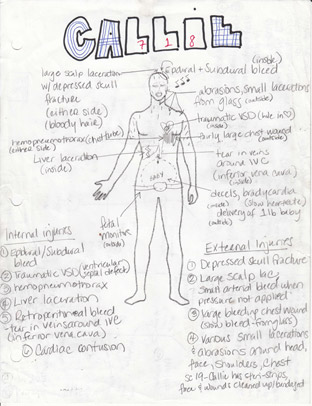