To ring in the New Year, music superstar Carrie Underwood will headline the evening with a performance of her hit songs for over 1 million fans in Times Square moments before the ball drops, live on ABC's telecast of Dick Clark's New Year's Rockin' Eve with Ryan Seacrest 2016. The ten-time Billboard Music Award winner and eight-time American Music Award winner has spent 38 weeks at No. 1 on Billboard's Top Country Albums chart and recently celebrated the release of her fifth studio album, Storyteller. America's biggest celebration of the year will take place live from Times Square on THURSDAY, DECEMBER 31 beginning at 8 p.m., ET/PT on the ABC Television Network.

It's going to be one epic New Year's Rockin' Eve party! Ring in 2016 with Ryan Seacrest and Carrie Underwood on ABC.

"There's nowhere else I'd rather be than New York's Times Square, one of the most magical places in the world, to ring in the New Year," said Underwood. "It's going to be a memorable night, and I can't wait to celebrate with the world!"

"The first time I heard Carrie sing, I knew she would be a superstar, and each year she continues to dominate the charts," said host and executive producer Ryan Seacrest. "I can't wait to see her rock Times Square and ring in 2016 as our headliner."

The bi-coastal celebration will include hours of special performances and reports on New Year's celebrations from around the globe, and Ryan Seacrest will lead the traditional countdown to midnight from Times Square in New York City as he has for the last 10 years. 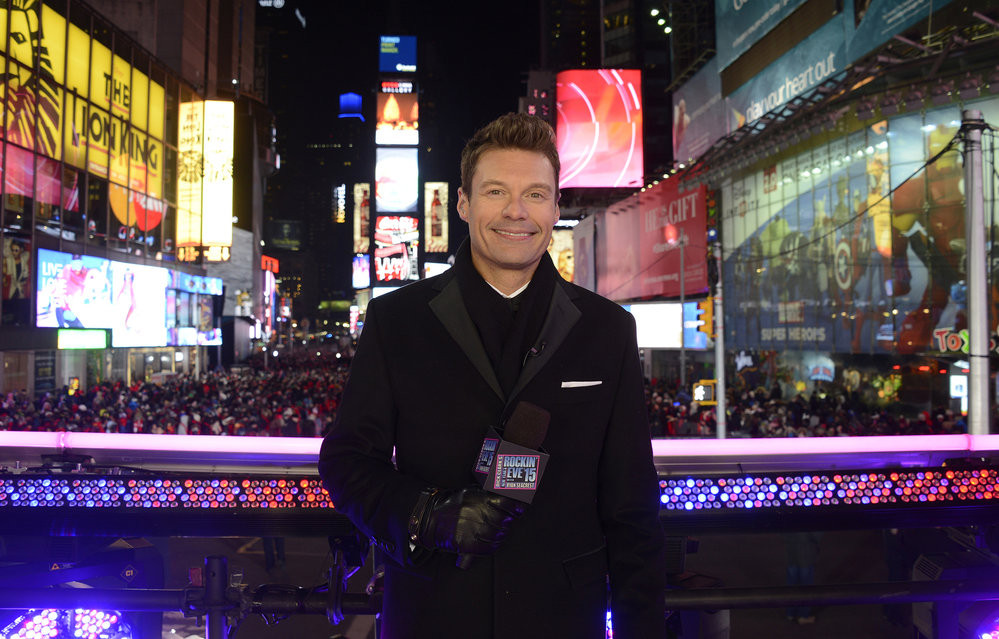 In addition to Underwood's performance, actress and comedian Jenny McCarthy will report live from Times Square while popstar Fergie returns to host the Billboard Hollywood Party.

Carrie Underwood emerged from the promise of her 2005 American Idol win to become a true multi-format, multi-media superstar, spanning achievements in music, television, and film. A seven-time GRAMMY® Award winner, she has amassed nearly 100 major honors, sold 58 million records worldwide, and recorded 21 #1 singles, 11 of which she co-wrote. The first female artist to be twice named the Academy of Country Music's Entertainer of the Year, Underwood was recognized as Pollstar's top female country touring artist for her headlining tours in 2008, 2010, and 2012. Her four studio albums, Some Hearts, Carnival Ride, Play On, and Blown Away – each certified multi-Platinum or Platinum, and each an American Music Awards winner as Country Album of the Year – tallied 38 weeks at #1 on Billboard's Top Country Albums chart with songs that have been streamed more than 1.5 billion times worldwide. In 2013, she starred as Maria von Trapp in NBC's three-hour holiday blockbuster, the Emmy®-winning The Sound of Music Live!, whose airings attracted 44 million viewers. In late 2014, the Grand Ole Opry member released her first hits collection, Greatest Hits: Decade #1. Celebrating her first 10 years of music, the 25 songs included two new hits co-written by Underwood: the Platinum-certified, GRAMMY-winning "Something in the Water," as well as the #1 smash "Little Toy Guns." In September of 2015, she began her third season as the voice of primetime television's #1 program, Sunday Night Football, and on November 4, she'll return for an eighth consecutive year as co-host of the CMA Awards. Underwood is at radio now with her record-breaking single "Smoke Break," the first single released from her fifth studio album, Storyteller, out worldwide now.

Multi-platinum recording artist Fergie is currently in the studio putting the finishing touches on her highly anticipated sophomore album scheduled for release early next year. The new album is the follow up to her to her 2006 solo album The Dutchess, which debuted at No. 2 on the Billboard Top 200 and spent 94 weeks on the chart. The album went on to sell 6.2 million copies and 28.5 million tracks worldwide and spawned three No. 1 hits on the Hot 100: "London Bridge," "Glamorous," and "Big Girls Don't Cry," as well as the Top 5 singles "Fergalicious" and "Clumsy." Since the release of The Dutchess, Fergie has also released two monster multi-Platinum albums, The E.N.D. and The Beginning, with The Black Eyed Peas– with whom she has sold 31 million albums and 58 million singles worldwide. The Black Eyed Peas' videos have been viewed over 2 billion times on their YouTube channel. Last year, Fergie released the single, "L.A.Love (la la)"which went on to sell nearly 2 million copies worldwide. In 2013, Fergie released the platinum selling song "A Little Party Never Killed Nobody," which appeared on the platinum soundtrack to the 2013 film The Great Gatsby.

Jenny McCarthy is an actress, comedian, host and New York Times best-selling author, known for her unique combination of intelligence, outrageousness, unpredictability and humor. She is a regular on the airwaves with Dirty, Sexy, Funny with Jenny McCarthy, her sensational daily live morning radio show on SiriusXM, discussing relationships, pop culture and current events. McCarthy executive produces with her husband Donnie on their second season of Donnie Loves Jenny, an original series on the A&E Network.

The complete lineup Thursday night, December 31 on ABC is: