Watch the Documentary "Homegrown Hate: The War Among Us" with ABC News Live Tuesday 8e|7p

Streaming news channel ABC News Live will present the special hour-long original documentary "Homegrown Hate: The War Among Us," an investigation more than a year in the making, exploring hate and white supremacy in America. Reported by ABC News Live Anchor Linsey Davis, "Homegrown Hate: The War Among Us" delivers a chilling look into hate-inspired violence and intimidation and the growth of domestic terrorism. It will trace the origins of the KKK that rose out of the ashes of the Civil War and connect to the modern-day white-supremacy/white-power movement that was spawned during Vietnam, grew steadily, led directly to the radicalization of 1995 Oklahoma City bomber Timothy McVeigh and then morphed into what exists today. The documentary also examines the rise in current day hate crimes, how the government is combatting the threat and how it is, in some ways, failing to do what needs to be done. "Homegrown Hate: The War Among Us" features the first television interview with Kelvin Pierce, son of neo-Nazi leader and author of "The Turner Diaries" William Luther Pierce, and the original, rarely heard audio recordings of McVeigh talking about his motives, planning and agenda. Kelvin opens up about being raised in a home steeped in hate and white supremacy and how he eventually came to renounce his father and his beliefs. The original documentary streams Tuesday, October 6, (8:00 – 9:00 p.m. EDT/5:00 – 6:00 p.m. PDT).

WATCH "HOMEGROWN HATE: THE WAR AMONG US" HERE WITH ABC NEWS LIVE! 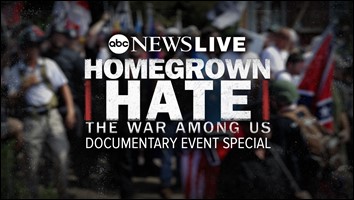 "Homegrown Hate: The War Among Us" features additional interviews with former senior federal officials including Elizabeth Neumann, the recently departed Assistant Secretary of Homeland Security who breaks her silence on what she describes as the Trump administration's failures and how the president's own words and deeds have made the nation less safe, and Leon Panetta, the White House Chief of Staff at the time of the Oklahoma City bombing; ABC News Chief Justice Correspondent Pierre Thomas; retired FBI agents Barry Black, Mike German and Bob Ricks who investigated the Oklahoma City bombing or other white supremacist activity; Kathleen Belew, the author of "Bring the War Home" who traced the history of the violent modern white supremacy movement; McVeigh's lead attorney Stephen Jones; and Helena Garrett, the mother of a 16-month-old boy killed in the Oklahoma City bombing.

"Homegrown Hate: The War Among Us" is produced by ABC News' Investigative Unit. Chris Vlasto is Senior Executive Producer of the Investigative Unit, and Cindy Galli is Chief of Investigative Projects. Josh Margolin and Meg Christie are senior producers on the documentary. The documentary will re-air on ABC News Live at 11:00 p.m. EDT/8:00 p.m. PDT on Tuesday, October 6.