7 Easy Halloween Costumes from Once Upon a Time

Costumes on Once Upon a Time aren't just beautiful, they're magical. If you're not Emmy-nominated costume designer Eduardo Castro, you might be a little overwhelmed by the idea of trying to create them for Halloween.

Don't be! You can very easily recreate the looks of your favorite Once Upon a Time characters by using basic items you already have or can borrow, and adding just one special detail: the character's signature piece. 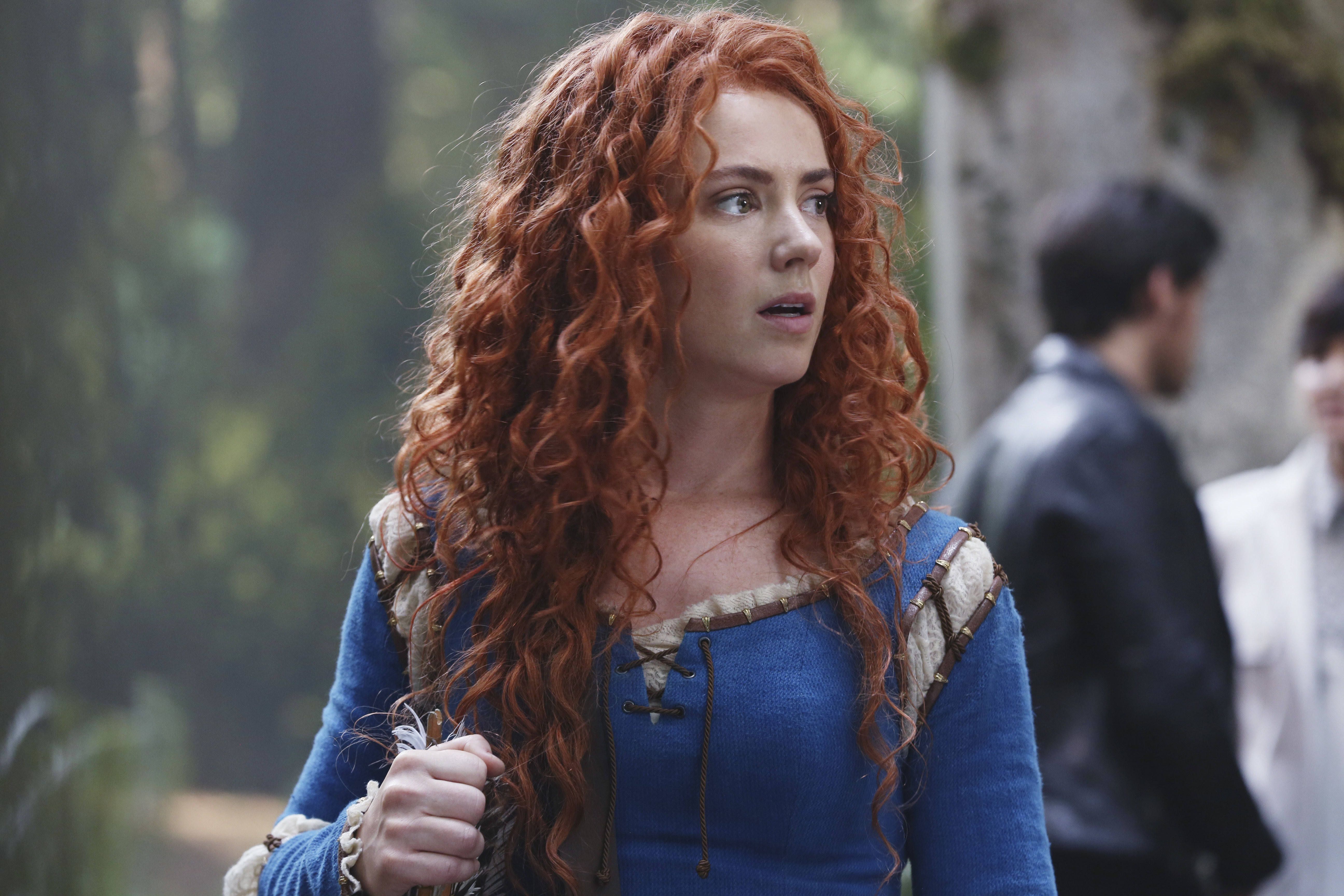 Merida, the Brave Warrior
Warrior princess Merida is one fierce lady, with an equally fierce look to boot! To achieve the brave princess' look, all you need for the outfit is a bright blue dress, a dark cape, and black boots. However, you wouldn't be complete without Merida's signature bright red, curly long hair, available at costume or hair supply stores, as well as her bow and arrow, available at toy stores.

WATCH: Emma meets Merida for the first time. From the season 5 premiere, "The Dark Swan." 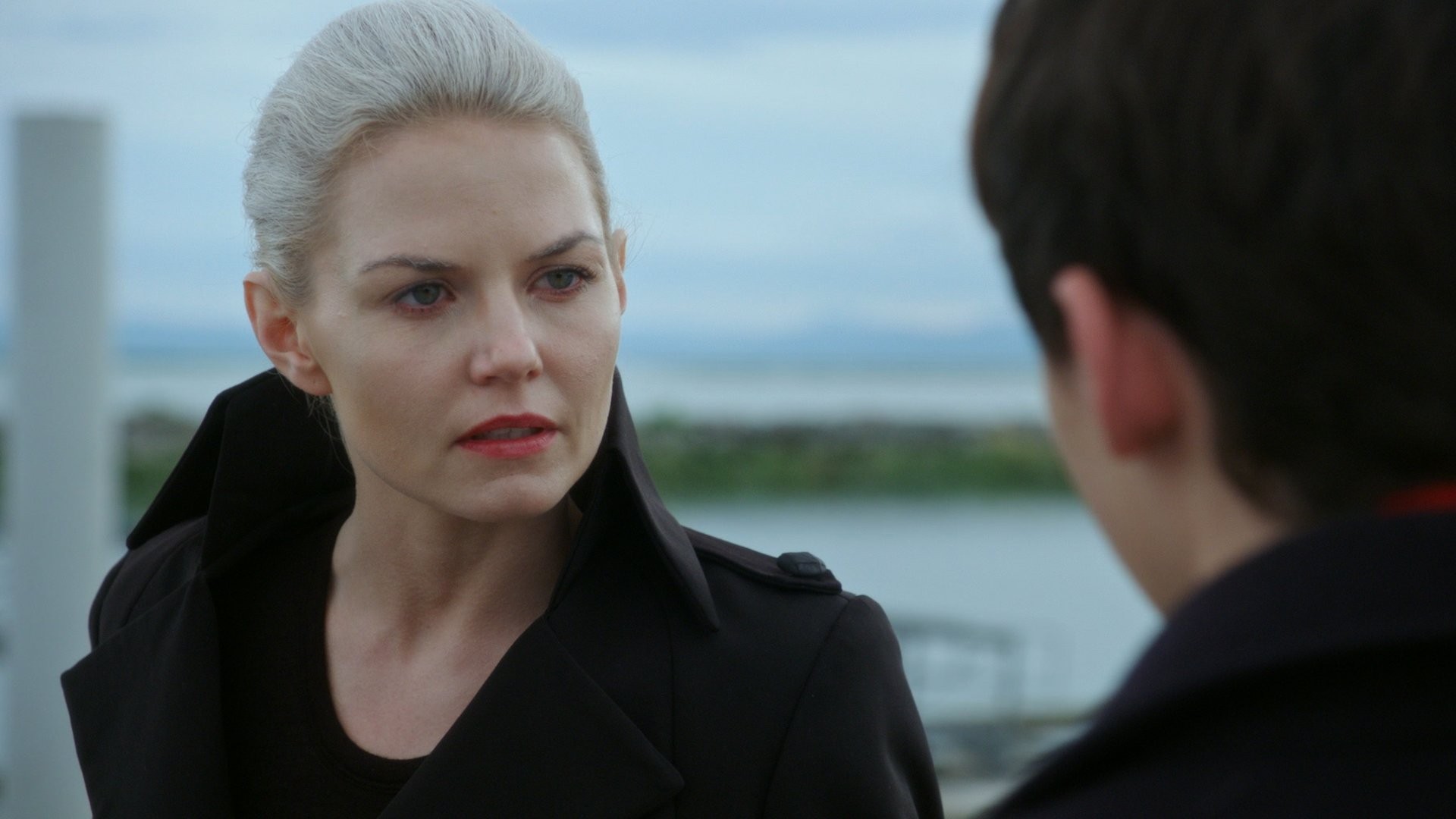 Dark Swan
Emma Swan's Dark Swan getup is pretty simple. All you would need to wear is an all-black outfit: a black shirt, black pants and a black jacket. The last detail - and possibly most important - is her slicked back white hair, which you can achieve by putting your hair into a tight bun and by spraying white temporary hair color spray (which could be found at any costume or hair supply store) onto your tresses. Vamp up your look with red lipstick and red eye shadow, available at drug stores.

Emma Wants Gold to be the Hero|She can make him the last thing he thought he could be.|Emma (Jennifer Morrison) wakes up a confused and nervous Gold (Robert Carlyle) and explains to him that she is going to make him a hero. Not only will he be a hero, she will make him the purest one that's ever lived. From Once Upon a Time season 5 episode 3, "Siege Perilous."

WATCH: Dark Swan wants Gold to be the hero in the season 5 episode, "Siege Perilous." 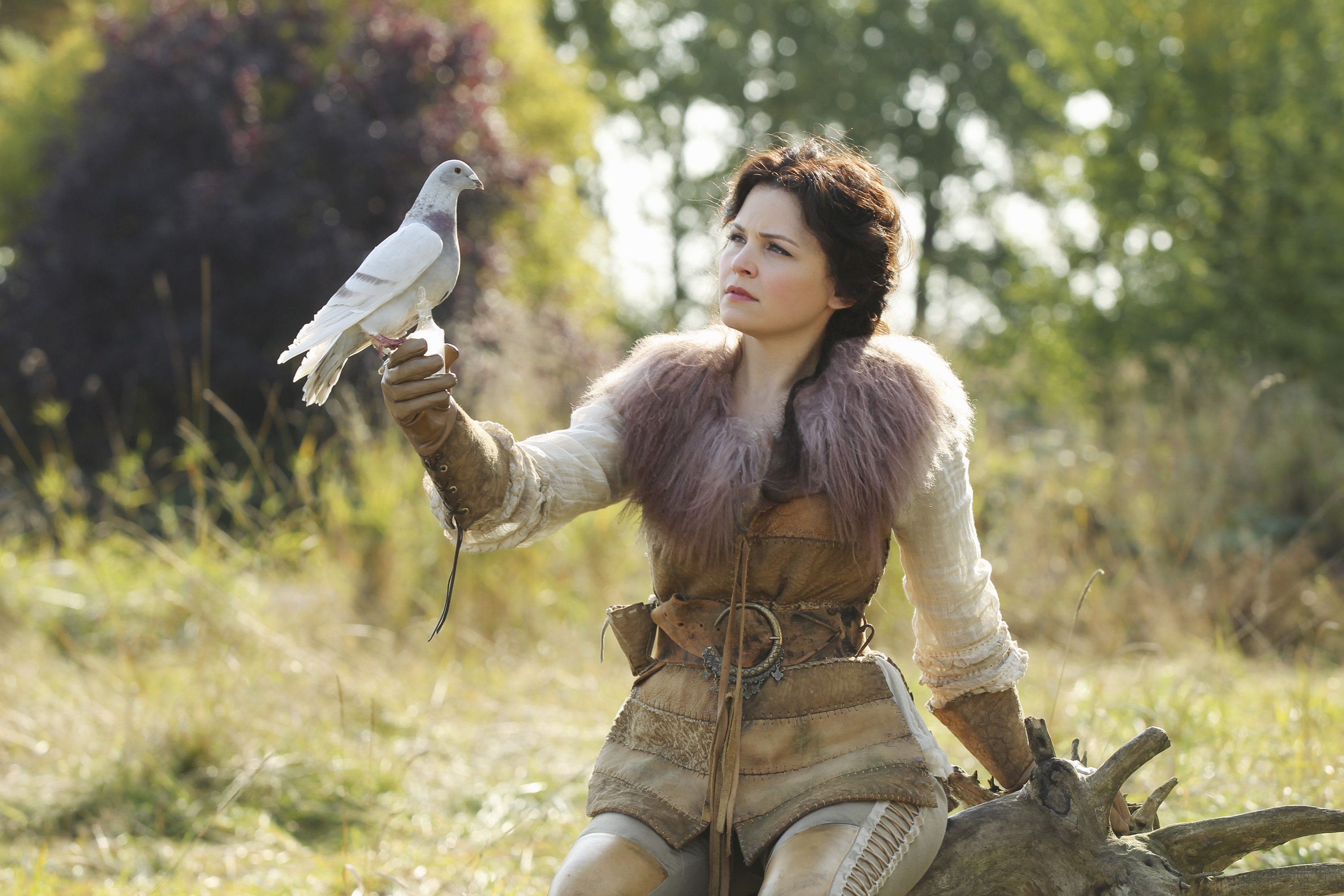 Snow White, the Bandit
Snow White's bandit look relies on a few things you can borrow if you don't already have them: tall leather boots, a pair of khakis, and a long sleeve white shirt. The key item that ties together the bandit look is the fur vest. You can make one out of faux fur, available at fabric or craft stores. 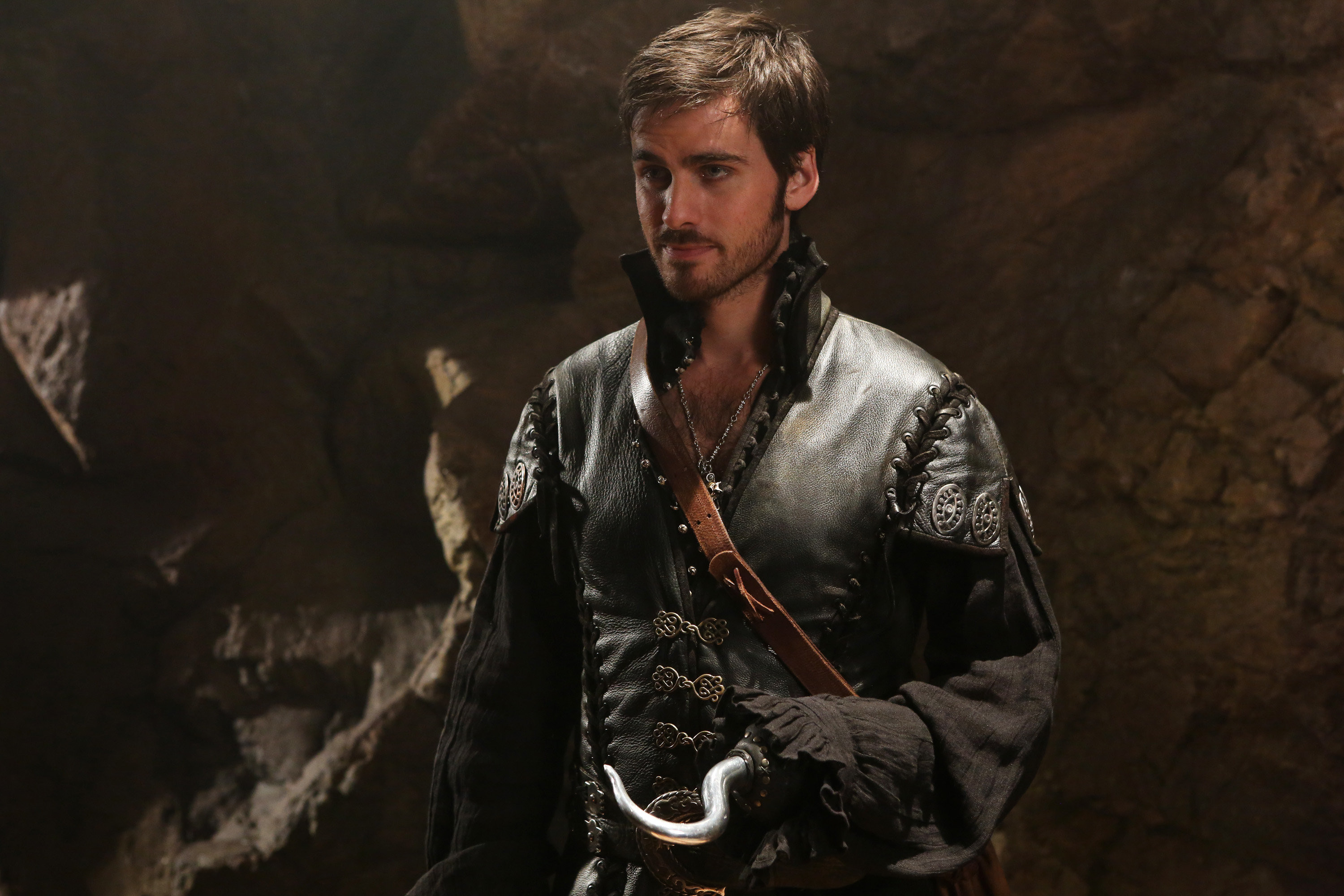 Hook
We all want to be Captain Hook when we grow up, but why wait? To make it happen this Halloween, think lots of black layers (boots, jeans, t-shirt, jacket with the collar popped), some glittering pirate jewelry, and a big belt with an oversized gold buckle. The most important item, of course, is the hook, which you can get at any party or Halloween store. And don't forget the eyeliner!

WATCH: Emma asks Hook to move In: From Season 6 episode, "The Other Shoe" 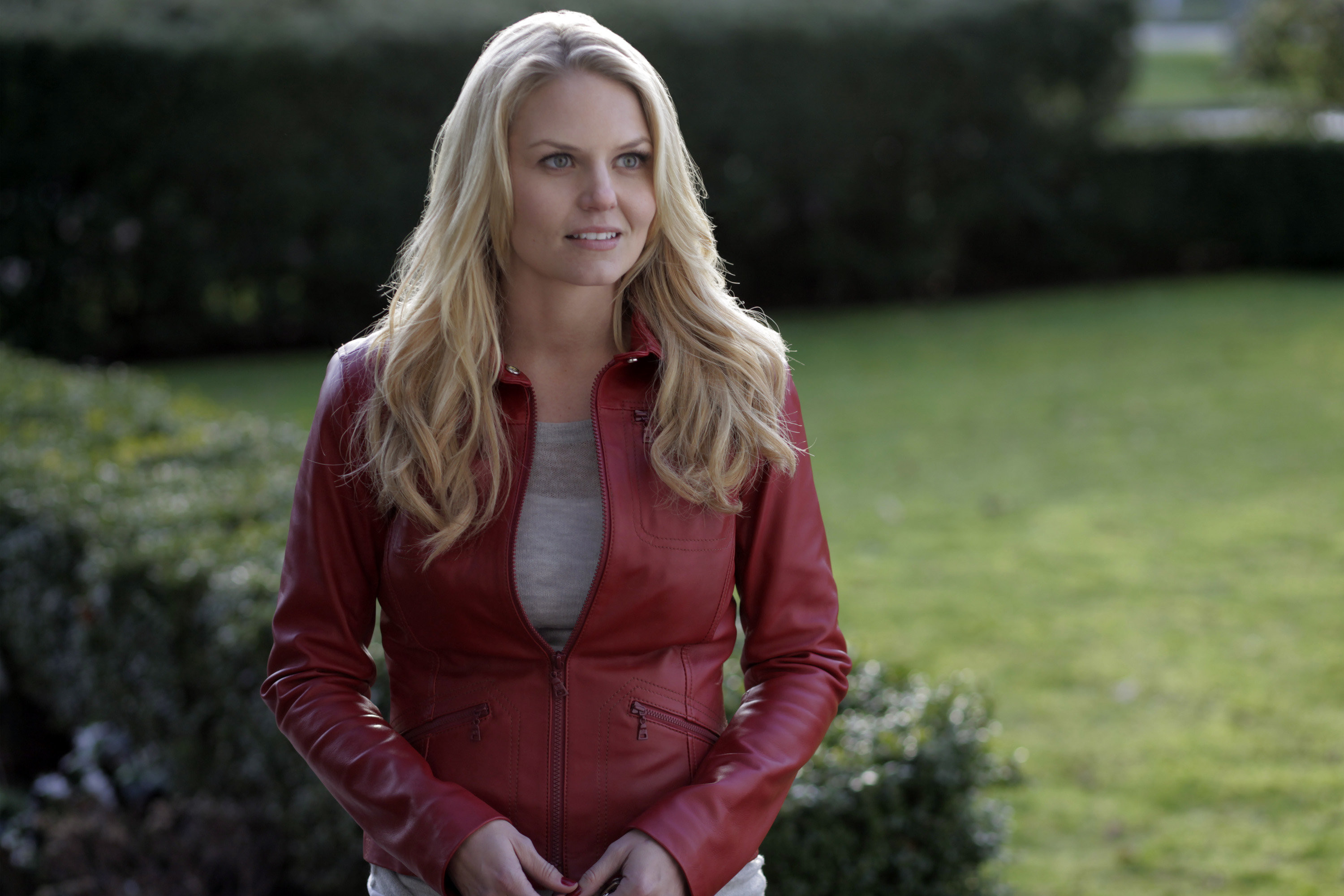 Emma Swan
Emma's basic look should be pretty easy to source: dark jeans, white and gray tank tops, and a pair of black boots. The signature piece you'll need to track down? That amazing red leather jacket, which you can buy online or possibly even find at a local thrift store. 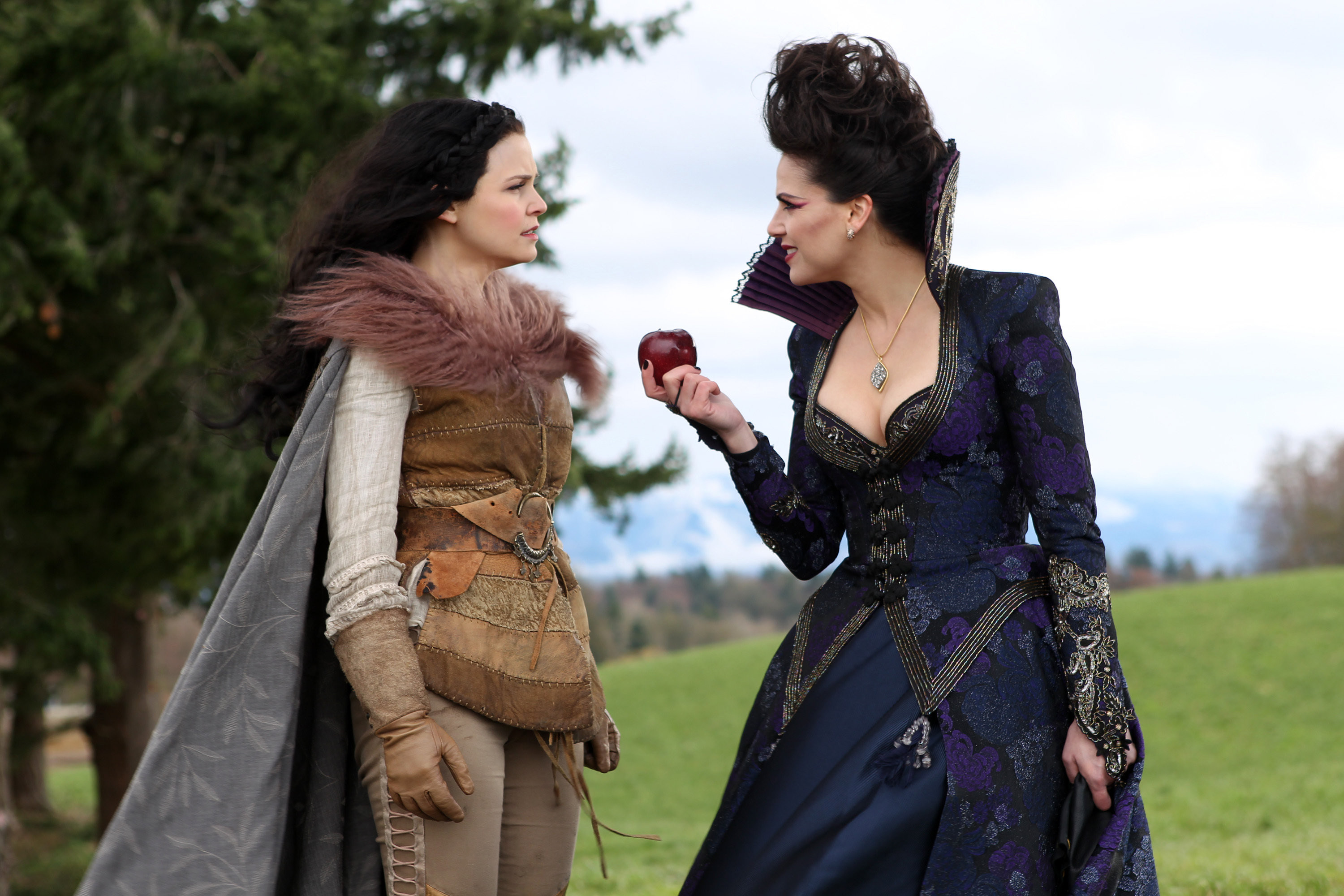 The Evil Queen
The Evil Queen has so many deliciously devilish looks, it's hard to pick just one. You can't go wrong in a long, dark dress paired with a black wig and dramatic makeup (powerful dark eyes and deep red lips). The key to this costume is the prop – one perfect red apple, which you can find at any grocery store.

WATCH: The Evil Queen's promises to destroy the kingdom. From Season 1 episode, "Pilot." 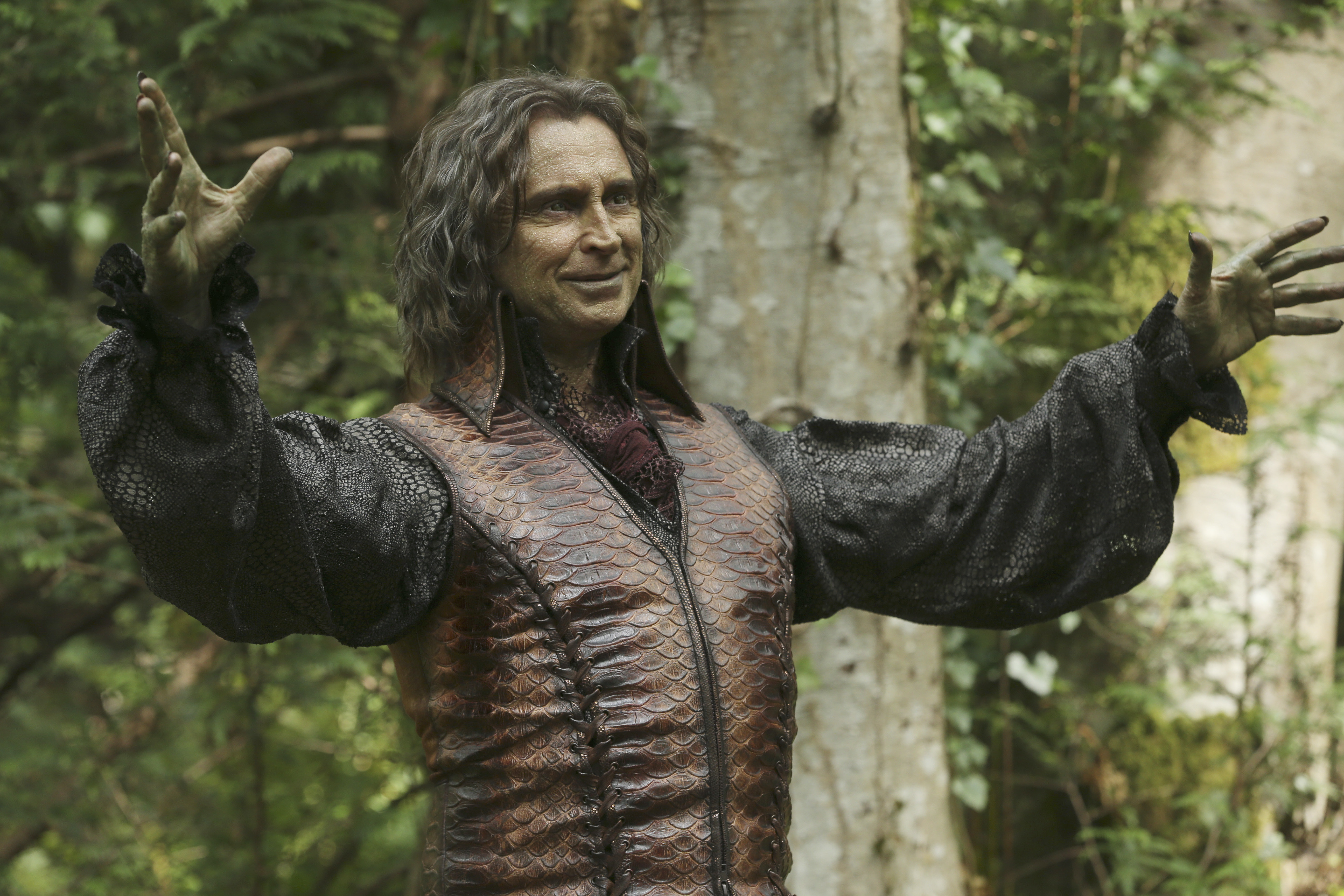 Rumplestiltskin
Rumple's basic outfit can be achieved pretty easily: boots, black pants, a black shirt and a leather jacket of some kind. Crinkle your hair and add some creepy dark glue-on fingernails from the drug store and you're almost set. The key to this outfit, of course, is the glittering gold face, which you can achieve with makeup from your local Halloween store.


Feeling a bit more adventurous? Check out Elsa & Anna Halloween Costume Ideas from Once Upon a Time, where you'll go behind the scenes with Eduardo Castro to find inspiration for a really cool costume.