As this week’s episode opens, Olivia is getting calls from both Josie Marcus and President Grant to find out which campaign she’ll be joining. The White Hat is in high demand!

But Olivia seems undecided about what her next move will be, and marches over to the Oval Office to get some clarity. When Fitz dodges her questions about his involvement with Operation Remington (or lack of involvement), Olivia tells him that she cannot work for him. Marcus campaign for the win!

And so, the real nitty-gritty of running a campaign begins. What exactly does that nitty-gritty entail? In Josie Marcus’ case, it means shaping her public image. Olivia and Abby show Josie a series of Josie’s light-hearted talk show appearances. Josie is clearly likeable, but is she being taken seriously? Olivia stresses that it’s important for the candidate to raise money for a big media push. And that means sitting down with lobbyists and donors to get the PAC money and large donations needed to fund said media campaign.

Olivia lines up the fat cats and Josie makes nice with the sugar industry, defense lobbyists, and ocean farming reps. But it seems that she hasn’t done enough to get these donors to pay up. As Olivia says, it’s a case of the chicken and the egg: “donors don’t want to spend until they think you’ll win, and you can’t tip the polls without the money required for a big media push.” The team tries to convince Josie to go negative against her competition, but Josie doesn’t want to do an attack ad. Instead, Olivia arranges a big interview with James Novak.

In prep for the interview, Josie continues to be nice and likable, but won’t show her claws the way Olivia wants her to. Josie snaps when the team pushes her too hard, and it’s this show of a temper that gives Olivia and Abby an idea… 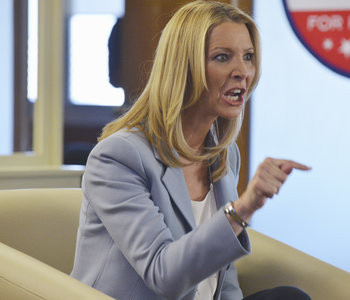 Right before the live interview with James, Olivia shows Josie a video of an attack ad supposedly leaked from the opposition, poking fun at Marcus’s alleged inexperience. Going into the interview, Josie is fired up, and when the program emphasizes her femininity over her real life experience, she goes on the attack against her Democratic opponent. Her temper is channeled into showing the public that she does indeed have the necessary claws to become president.

After the interview, the support from big donors comes rolling in. Candy, Josie’s sister/daughter, confronts Abby, pointing out that she’s wearing the same nail polish as the hand in the attack ad. Turns out OPA made the attack video themselves in order to push Josie towards going negative on her opposition.

So, does going negative really work? A few examples from decades past prove the power of attack ads.  In the 1988 presidential election, a famous ad attacked Democratic challenger Michael Dukakis. The ad painted Dukakis as soft on crime due to Massachusetts’s prison furlough program, which allowed murderer Willie Horton to commit a rape and assault during his temporary release. The ad is widely considered a major reason for Dukakis’ failed campaign. Similarly, a 1964 ad released by Lyndon Johnson’s campaign is credited with tanking Barry Goldwater’s run. The ad depicted a young girl counting daisy petals, cut with a man’s voice counting down to a nuclear explosion. This ad convinced many voters that the stakes of Goldwater’s aggressive approach to the Cold War were too high.

So, now that Josie has joined the big leagues and gone negative, what does the future hold for her? Will she prove to be a true rival to Fitz? And where will Olivia take Josie next in her aggressive campaign approach? Stay tuned!