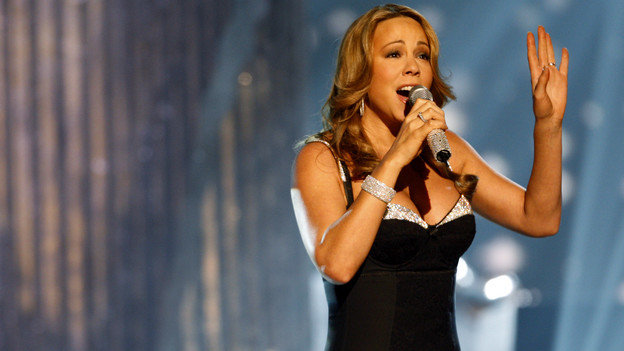 Global superstar Mariah Carey joins the holiday event of the season, as Disney and ABC celebrate the most wonderful time of year. Carey will captivate audiences from outside It's a Small World at Disneyland Park, performing her unforgettable holiday hit, "All I Want for Christmas Is You," one of the biggest Christmas songs of all time. "The Wonderful World of Disney: Magical Holiday Celebration," will air THURSDAY, NOVEMBER 24 (8:00–10:00 p.m. EST), on the ABC Television Network, and "The Disney Parks' Magical Christmas Celebration" will air SUNDAY, DECEMBER 25 (10:00 a.m.–12:00 p.m. EST), on the ABC Television Network.

The bestselling female artist of all time, with more than 220 million records sold and eighteen #1 singles – the most for any solo artist in history – Mariah Carey is a luminous and enduring talent who has enthralled audiences for a quarter-century. Known for her distinct five-octave vocal range, she is equally distinguished as a songwriter, penning all but one of her #1 singles, including "Fantasy," "Always Be My Baby," "Hero," "Touch My Body," "One Sweet Day" and "We Belong Together," more than any other solo artist.

As a singer, songwriter and producer, Carey has been recognized with multiple Grammy Awards, 21 American Music Awards, 14 Billboard Music Awards and BMI's coveted Icon Award, among myriad others, and was named Billboard's Artist of the Decade and the World Music Awards' World's Best Selling Female Artist of the Millennium. Beyond industry honors, her popularity is evident across social media, with 21 million Facebook fans and 16 million Twitter followers.

Disney kicks off the holidays with three musical specials originating from Walt Disney World Resort in Florida and Disneyland Resort in California. The shows will be presented on Disney|ABC Television Group platforms, including ABC Television Network, Disney Channel, the ABC and Disney Channel apps and VOD, among other branded digital platforms. The holiday specials will include performances by some of the world's most popular recording artists, celebrity hosts, Disney character appearances and heartwarming wish-come-true moments for three lucky families from across the country.

The holiday specials are a collaboration by Disney Parks, Disney|ABC Television Group and IMG.

The multi-platform programming schedule is:

THANKSGIVING – THURSDAY, NOVEMBER 24
"The Wonderful World of Disney: Magical Holiday Celebration" premieres on the ABC Television Network (8:00–10:00 p.m. EST) and on the ABC app. Join Emmy Award-winners Julianne and Derek Hough as they host the magical two-hour special from the Walt Disney World Resort. They join "Descendants 2" star Sofia Carson to kick off the holiday season in a way only Disney can, showcasing extraordinary music performances, special appearances and some unforgettable Disney magic moments.

CHRISTMAS – SUNDAY, DECEMBER 25
"The Disney Parks' Magical Christmas Celebration" will air on the ABC Television Network (10:00 a.m.–12:00 p.m. EST; airtimes vary, check listings) and on the ABC and Disney Channel apps. This Christmas, Disney Parks celebrate the joy of the holiday season, as hosts Julianne and Derek Hough take viewers on a magical ride down Main Street and beyond. The Christmas Day celebration will be bigger and brighter than ever before, bringing together the beloved Christmas day parade, magical musical performances, surprise celebrity guests and heart-warming family stories to celebrate the most wonderful time of the year.