Listen to "Life Out Loud" Podcasts from ABC News

On Tuesday, June 1, ABC News will kick off Pride Month with the two-episode premiere of its first LGBTQ+ issue-focused podcast, "Life Out Loud with LZ Granderson." ABC News Contributor LZ Granderson draws from his own lived experience as a gay, Black father to host inspiring, provocative and often hilarious conversations to help preserve the history of the LGBTQ+ community. This podcast will delve into the policies, cultural touchstones and historical events that have shaped the collective experience of this often underrepresented and misunderstood group. Guests will shed light on the past by sharing their own stories and look to the future by describing their vision for how living "life out loud" should look. The first two episodes will explore the impact of the groundbreaking FX series "Pose" as it wraps its third and final season. The show's co-creator and co-executive producer, Steven Canals, joins Granderson in the inaugural episode of "Life Out Loud." The second episode will feature a conversation with "Pose" star Mj Rodriguez, who is the first transgender actress to win Best Actress at the Imagen Awards. 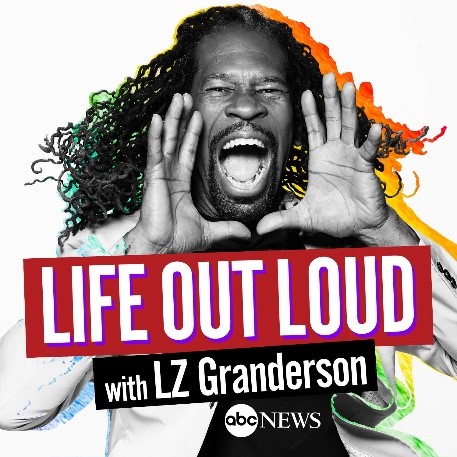 "We lost so many stories to the AIDS epidemic, violence, harassment and silence due to fear," says Granderson. "I'm passionate about creating a space to capture these underreported stories and untold oral histories while also celebrating the joys of living 'life out loud' and where we're going as a community."

The third episode of "Life Out Loud" will post on Thursday, June 3, and feature an interview with GRAMMY Award®-nominated musician Rufus Wainwright ahead of his tribute to icon Judy Garland on what would have been her 99th birthday. Additional installments of the ten-episode season will post every Thursday and guests include Dr. Anthony Fauci on his response to the AIDS crisis; Sherry Cola, comedian and actress on Freeform's "Good Trouble"; history-making politicians including Senator Tammy Baldwin; Super Bowl winner Keyshawn Johnson; and Oscar® winner Dustin Lance Black and husband Tom Daley, Olympic medal winner. "Life Out Loud" is available for free on major listening platforms, including Apple Podcasts, Spotify, Amazon Music, Google Podcasts, iHeartRadio, TuneIn, Audacy and the ABC News app.

Granderson is an award-winning journalist, ESPN Radio host and Op-Ed columnist for the Los Angeles Times. He was selected as "Journalist of the Year" by the National Lesbian and Gay Journalists Association in 2011, and his TED Talk, "Myth of the Gay Agenda," has 1.7 million views. Granderson has received recognition for his work from each major LGBTQ+ organization in the nation, including the Human Rights Campaign and GLAAD. The Advocate, the nation's most prominent and oldest LGBTQ+ magazine, frequently includes him as one of the 50 most influential LGBTQ voices in media. "Life Out Loud" is produced by ABC Audio. Eric Johnson and Liz Alesse are executive producers.

"Life Out Loud" is the first podcast produced in conjunction with members of the ABC News and Owned Television Stations PRIDE Business Employee Resource Group, which is co-chaired by senior producers Anthony Morrison and Robert Zepeda. Members include LGBTQ+ employees and allies from across ABC News, ABC-Owned Television Stations, Disney General Entertainment Content, and other segments of The Walt Disney Company.

HomeNews & BlogsListen to "Life Out Loud" Podcasts from ABC News