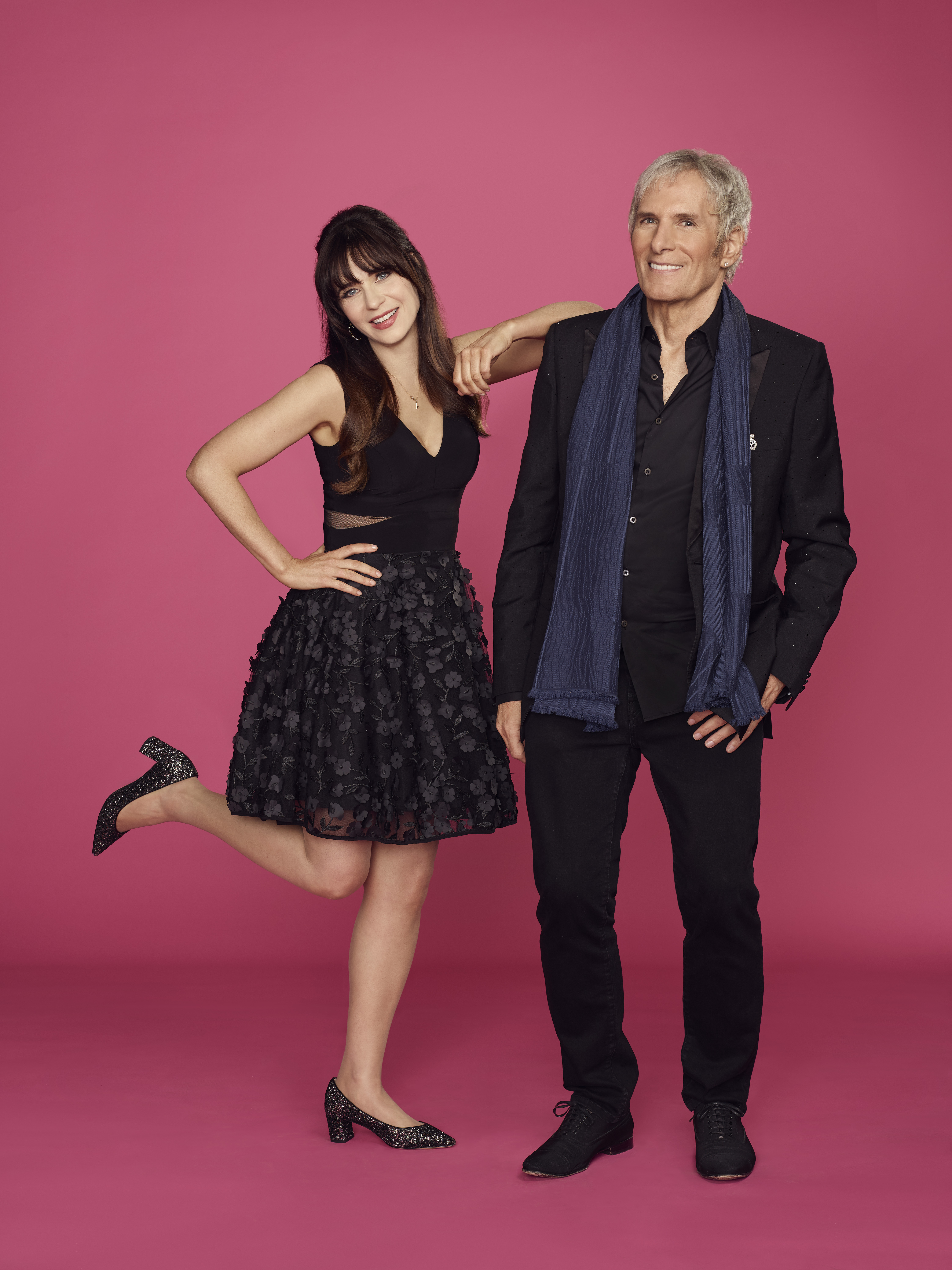 Offering the same iconic feel as the original classic dating show, each episode follows two celebrities who each pick one lucky suitor from a hidden panel of three bachelors and/or bachelorettes based on answers to a variety of questions. But there's a twist! The celebrity identities will remain a mystery to their suitors, who are given clues via hilarious parody song performances by host Michael Bolton. The Celebrity Dating Game is produced by Sony Pictures Television. Charles Wachter, Michael Bolton, Christina Kline and Wendi Wan serve as executive producers.

Now in its second season as the No. 1 network in entertainment among Adults 18-49, ABC is ready to kick off a summer full of fun, thrills and romance with the lineup of star-studded unscripted programming. Three new series make their debut alongside 11 of the most popular and well-known titles on television. Luke Wilson-hosted "Emergency Call" dials in new episodes beginning FRIDAY, JUNE 4. Summer Sunday nights are synonymous with game shows. ABC welcomes "Celebrity Family Feud," "The Chase" and "To Tell the Truth" back on SUNDAY, JUNE 6. These shows dominated 2020 ratings: During summer 2020, "Celebrity Family Feud" ranked as the No. 1 program in the Sunday 8 p.m. hour in Total Viewers; this past fall, "The Chase" ranked as the No. 1 program in the Thursday 9 p.m. hour in Total Viewers and Adults 18-49; and this season "To Tell the Truth" grew by 22% in Total Viewers to deliver its most-watched season since its debut in 2016. Katie Thurston makes her entrance as "The Bachelorette" on MONDAY, JUNE 7. This season, "The Bachelorette" is the No. 1 show on television among Women 18-34, and ranks among the season's Top 10 highest-rated entertainment shows in Adults 18-49. On WEDNESDAY, JUNE 9, ABC is doubling down on game shows with new episodes of "Press Your Luck," "The $100,000 Pyramid" and "Card Sharks." The brand-new "The Celebrity Dating Game," hosted by Zooey Deschanel and Michael Bolton, makes its "Summer Fun & Games" debut on MONDAY, JUNE 14.  Thursday nights will feature hilarity and hijinks with the premieres of brand-new show "When Nature Calls" (working title), returning fan-favorite "Holey Moley" and newest mystery game show "The Hustler" on THURSDAY, JUNE 17. Last year, "Holey Moley" was the No. 1 most co-viewed summer series on the broadcast networks. Later in the summer, "Bachelor in Paradise" makes its long-awaited return on MONDAY, AUG. 16. Postponed last season due to the pandemic, the series brings back sizzling summer nights for the first time in two years. Then, the all-new competition series "The Ultimate Surfer" makes its network debut.

Airdates are as follows (all times listed are Eastern/Pacific). New shows are in bold.

Information on the series below.

THE $100,000 PYRAMID
Michael Strahan is back as host of "The $100,000 Pyramid," the timeless word-association game in which two celebrities and their partners face off in a race against the clock to make it to the winner's circle and take home $100,000.

BACHELOR IN PARADISE
Breakout fan favorites from "The Bachelor" franchise are back and ready for a second (or third) chance at finding love. They may have left their respective seasons brokenhearted, but now they have the opportunity to travel to a romantic paradise in hopes of turning a potential summer fling into the real thing.

THE BACHELORETTE
After appearing in the landmark 25th season of "The Bachelor," Katie Thurston emerged as a leading voice, who repeatedly stood up against bullying and negativity in the house; and women all over America applauded her for speaking up for what she believes. The 30-year-old Washington native became an instant fan favorite for her memorable arrival on night one where she introduced herself to Matt, light-up vibrator in tow. Unapologetically herself, Katie is adventurous, daring and ready for a man with whom she can build a life. A marketing manager with an innate social media savvy and humorous outlook on life, she is a witty storyteller who wants a man that will laugh along with her, and is ready to step into the spotlight for her own love story to be told.

CARD SHARKS
Hosted by Joel McHale, "Card Sharks" is a suspenseful game where a fortune can be won on the turn of a single playing card. The road to glory and riches begins with two players who face off in a head-to-head elimination game with the goal of one player making it to the life-changing money card round. In the money card round, the winning player has to make gut-wrenching decisions and risk it all to win it all. Ultimately, players can either take their earned cash and quit or continue wagering for a chance to take home a major cash prize.

THE CELEBRITY DATING GAME (series premiere)
Hosted by actress and singer-songwriter Zooey Deschanel and multiple GRAMMY®-winning singer-songwriter Michael Bolton, "The Celebrity Dating Game" offers a wry wink at modern dating with a star-studded roster of celebrity singles from television, music, comedy, reality TV and feature film in their pursuit to find love. Offering the same iconic feel as the original classic dating show, each episode follows two celebrities who each pick one lucky suitor from a hidden panel of three bachelors and/or bachelorettes based on answers to a variety of questions. But there's a twist! The celebrity identities will remain a mystery to their suitors, who are given clues via hilarious parody song performances by host Michael Bolton.

CELEBRITY FAMILY FEUD
Hosted by the highly popular stand-up comedian, actor, author and Emmy® Award winner Steve Harvey, "Celebrity Family Feud" has celebrities along with their families go head-to-head in a contest to name the most popular responses to survey-type questions posed to 100 people for a chance to win money for a charity of their choice.

THE CHASE
The race to "The Chase" is back as the heart-racing quiz show where three competitors must pit their wits and face off against the Chaser, a ruthless quiz genius determined to stop them from winning cash prizes, returns to ABC. Each hourlong episode is a fast-paced battle of brainpower, where contestants are challenged to think faster than they ever thought possible to answer up to 166 questions across all topics. Sara Haines (ABC's "The View") hosts.

"The Chase" is produced by ITV America's ITV Entertainment and based on the hit British format, devised by Potato, part of ITV Studios. Adam Sher, David Eilenberg, Bernie Schaeffer and Vin Rubino are the executive producers.

EMERGENCY CALL
911 call takers from Austin, Texas; Ogden, Utah; New Orleans, Louisiana; Wasilla, Alaska; and Waukesha, Wisconsin, receive calls that will keep one on the edge of their seat. Hosted and executive produced by Luke Wilson, "Emergency Call" is a daring, hourlong series that documents the first few crucial minutes of emergencies told through the lens of America's heroic 911 call takers. The series follows the dramatic moments leading up to the arrival of help rather than the events after the firefighters, police or emergency medical services teams arrive, and focuses on the extreme, suspenseful and sometimes humorous stories that flood 911 call centers.

"Emergency Call" is executive produced by Adeline Ramage Rooney and Jonny Slow (8HOURS TELEVISION), Grant Kahler (showrunner) and Luke Wilson. The show is produced by 8HOURS TELEVISION, based on an original format by De Chinezen and licensed by Lineup Industries.

HOLEY MOLEY 3D IN 2D
ABC's wackiest extreme mini-golf competition series "Holey Moley" will return for season three as "Holey Moley 3D in 2D." The first-of-its-kind mini-golf competition showcases self-proclaimed miniature-golf lovers from around the country as they compete head-to-head through a series of matchups on an unparalleled, epic obstacle golf course. Returning are on-camera color commentating duo Rob Riggle and Joe Tessitore, sideline correspondent Jeannie Mai as well as executive producer and resident golf pro Stephen Curry. In season three, mini-golf enthusiasts and talented putters of all ages and from all corners of the U.S. will test their luck on the "Holey Moley" course in an attempt to be crowned winner and walk away with "The Golden Putter" trophy and coveted plaid jacket. Winners from each episode will return to the course for the season finale and putt for their chance at the giant cash prize.

THE HUSTLER
Hosted by comedian Craig Ferguson, each episode of "The Hustler" follows five contestants as they collaborate to answer a series of 10 trivia questions worth $10,000 each, with the goal of building a collective prize pot that increases with each correct answer. The catch? One of the five contestants, the Hustler, already knows the answers because every question is inspired by his/her life and interests but must keep their identity a secret in order to have a shot at winning the grand prize.

PRESS YOUR LUCK
Hosted by Elizabeth Banks, "Press Your Luck," is a game of wits, strategy and even higher stakes as contestants try to avoid the iconic and devilish WHAMMY for a chance at life-changing cash and prizes. During each game of "Press Your Luck," three contestants compete against each other answering questions to earn spins on the Big Board. Contestants then use their spins to win cash and prizes while trying to avoid the WHAMMY, who could take all of their winnings and leave them with nothing. The winning contestant moves on to the bonus round to face the WHAMMY in a final battle for the chance to win a million dollars.

"Press Your Luck" is produced by Fremantle. The show is executive produced by Jennifer Mullin, Elizabeth Banks, Max Handelman and John Quinn, who also serves as showrunner.

TO TELL THE TRUTH
Hosted by "black-ish" star Anthony Anderson, "To Tell the Truth" is the funny re-imagination of the beloved game show that features prominent pop-culture icons and unique commentary and banter from Anderson's mother, Mama Doris. In each round, the panel is presented with three people who all claim to be the same person with the same incredible talent, job or achievement. One is sworn to tell the truth, while the other two use every trick they can to deceive the panel. The panel of celebrities has a chance to grill each participant before taking turns deciding who they think is telling the truth.

THE ULTIMATE SURFER
"The Ultimate Surfer" will gather some of the world's greatest up-and-coming surfers to train and live together as they battle it out at the World Surf League's (WSL) state-of-the-art Surf Ranch in Lemoore, California, powered by Kelly Slater's human-made wave technology, in the hope of competing amongst the best athletes in the world's fastest-growing sport. Slater will serve as on-air talent and special correspondent for the show.

Alliances and rivalries will be front and center in "The Ultimate Surfer" as men and women compete in individual and team challenges focused on specific surfing disciplines. Weekly eliminations will leave two men and two women as finalists who will vie for the male and female titles of the The Ultimate Surfer and the opportunity to compete on the elite WSL Championship Tour, the pinnacle of professional surfing. Slater's remarkable, one-of-a-kind, human-made wave—the most even playing field for measuring surf mastery—is at the heart of the series.

WHEN NATURE CALLS (WT) (series premiere)
"When Nature Calls" (WT) is a laugh-out-loud, one-hour unscripted comedy series which looks at the lighter side of the natural world. Based on a BBC Studios comedy format, the show will surprise and delight viewers with what comes out of the mouths of majestic beasts, teeny-tiny frogs, beatboxing badgers and more within captivating, beautiful footage from all over the world. This new perspective on absurd animal antics is easy on the eyes and hilarious to the ears.