In the midst of a defining moment for the country when millions of protesters have called for justice and equality, ABC News aims to find out if America has reached a turning point with a groundbreaking month-long series of reports examining the racial reckoning sweeping the nation and whether it leads to lasting reconciliation. The unprecedented ABC News programming event "Turning Point," featuring a month-long takeover of "Nightline" and special reporting across all shows and platforms, will confront the systems and institutions that were built to disenfranchise people of color and have shaped this country throughout its history, and showcase the work being done to enact change. "Turning Point" kicks off Tuesday, Sept. 8, on "Nightline." 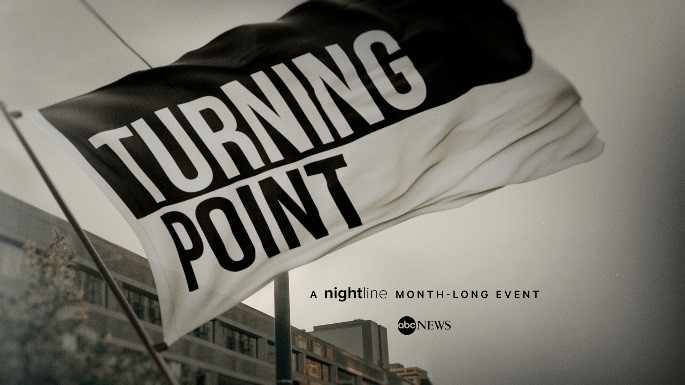 "Turning Point" was an award-winning ABC News program and series of specials in the 1990s hosted by some of ABC News' most esteemed anchors—it set the bar for reporting on compelling stories that emerged from "critical moments that changed lives, for better or worse," as the Orlando Sentinel described the show in 1994. With the four weeks of programming, ABC News and "Nightline" will once again deliver its signature series of reporting on a concentrated topic—systemic racism and racial reckoning—asking pointed questions and documenting personal journeys.

"Over the past few weeks and months, there has been a fever pitch echoing across the nation for this country to combat and undo its hundreds of years of systemic racism and inequities," said Marie Nelson, senior vice president of Integrated Content Strategy, ABC News. "With these special 'Turning Point' reports, our viewers will see our commitment to addressing this pivotal moment. This next month ABC News will provide context, history and hope with meaningful and impactful stories across broadcast, streaming, digital, audio and mobile."

"With the reckoning that has been sweeping across the nation since George Floyd and most recently Jacob Blake, our 'Turning Point' coverage each night for the next four weeks is more vital and relevant than ever," said Steven Baker, executive producer of "Nightline." "Over the course of our reporting, we've been asking ourselves if America has reached a turning point and I'm proud to have 'Nightline' bring these powerful stories that confront this reckoning and hopefully bring us closer to answering that question."

Samples of special coverage include the following: