Top 24 Put To The Test with Duets on "American Idol"

The show kicks off with Ryan standing on a darkened stage and, when it finally lights up, a brand new Idol stage is revealed -- a massive space complete with the very spacious Idol lounge and a masked, socially-distanced live audience! Twelve singers will be pulling double duty tonight with a solo performance followed by a star-powered duet. Who sang with whom? Let's find out!

Contestant: Alanis Sophia
Solo Song: "Alive" by Sia
Duet Partner/Mentor: Jimmie Allen
Duet Song: "Shallow" by Lady Gaga & Bradley Cooper
Judges' Comments: Katy found her solo to be "controlled and beautiful" but thought she looked like a "rising star" next to an established star. Luke said her voice is amazing, now she has to learn to control the stage. Lionel gives her the top to try and relax and enjoy the performance.

Contestant: Cassandra Coleman
Solo Song:  "Find Me" by Sigma feat. Birdy
Duet Partner/Mentor: Ryan Tedder
Duet Song: "Apologize" by OneRepublic
Judges' Comments: Lionel loves that she's come so far in trying to concentrate but to not let it show in her face. Luke says she's "in her own lane" and notes her growth, but still wants her to work on controlling her nerves. Katy calls her voice "otherworldly" and says she got "full body chills" during the performance.

Contestant: Alyssa Wray
Solo Song: "Something In the Water" by Carrie Underwood
Duet Partner/Mentor: Katherine McPhee
Duet Song: "I'm Your Baby Tonight" by Whitney Houston
Judges' Comments: Lionel says watching her perform is "like watching someone keep a cap on a volcano" and thought the duet looked like they had been "performing together for a hundred years." Katy thinks she's the first to hold her own with their star but notes in her solo to actually "feel the feeling" instead of just project it. Luke says he watched her "be her own star." 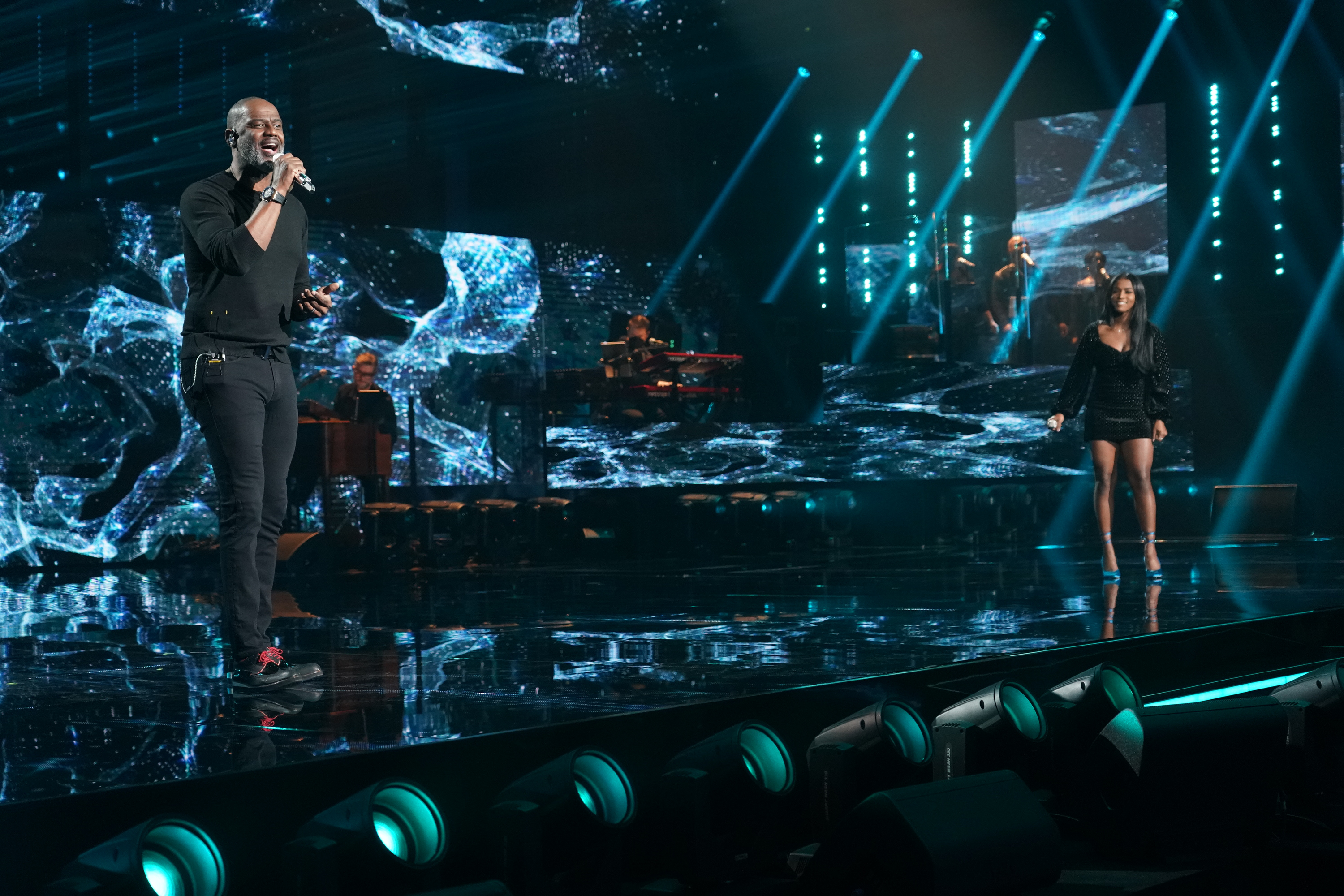 Contestant: Alana
Solo Song: "Blow Your Mind (Mwah)" by Dua Lipa
Duet Partner/Mentor: Brian McKnight
Duet Song: "Back At One" by Brian McKnight
Judges' Comments: Luke called out her "great energy" on her solo and thought she really started coming into her own towards the end of the duet. Lionel says she has the stage presence and energy to be a star, but now she needs the attitude. Katy thought she "embodied entertainment" and tells her not to be afraid to take some more risks with notes and "let it fly."

Contestant: Anilee List
Solo Song: "my future" by Billie Eilish
Duet Partner/Mentor: Joss Stone
Duet Song: "Tell Me Something Good" by Rufus & Chaka Khan
Judges' Comments: Lionel says to use Joss as "the perfect example of relaxation with concentration" and to feel good about rising to her level. Katy felt like Anilee took her to church but wanted to hear a few more "dice roll" ad-libs. Luke thinks she's "close to greatness."

Contestant: Deshawn Goncalves
Solo Song: "Forever Young" by Bob Dylan
Duet Partner/Mentor: Ryan Tedder
Duet Song: "I Lived" by OneRepublic
Judges' Comments: Katy says he has one of the most unique voices in the competition but to loosen up in his body language so she "really knows he's having fun." Luke says he's got great "tone and maneuvers" but he needs to "walk out and be the star." Lionel tells him not to think about it and just enjoy the performance, the audience, and the stage.

Contestant: Graham Defranco
Solo Song: "Raye" by John Splithoff
Duet Partner/Mentor: Ben Rector
Duet Song: "Love Like This" by Ben Rector
Judges' Comments: Luke called his voice "listenable" and thought his vocal range went to another level. Lionel said he has a great "storytelling voice" and that he moved them. Katy thought the first song was more of a "vibe" that she didn't feel a connection to but he really told a story in the duet. 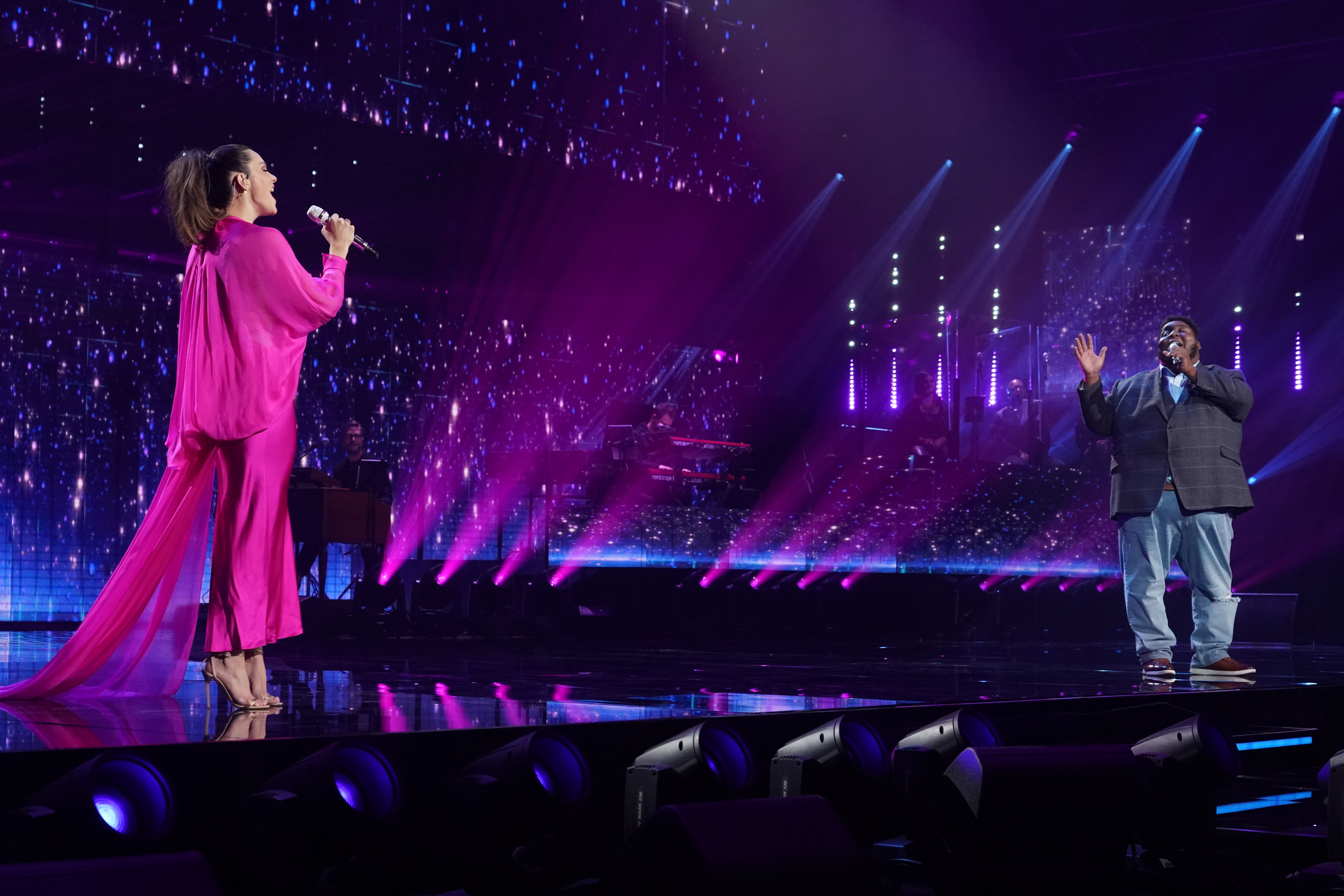 Contestant: Andrea Valles
Solo Song: "Lo Vas A Olvidar" by Billie Eilish and Rosalia
Duet Partner/Mentor: Brian McKnight
Duet Song: "Careless Whispers" by George Michael
Judges' Comments: Lionel was amazed that she did a duet with one of the smoothest voices and music and she stood on her own. Katy, who complimented her fashionable eye patch (she's ok!) loved her solo song choice and says she "can do anything." Luke said she showed big star quality during the audition that got lost a bit, but now she's back on the map.

Contestant: Cecil Ray
Solo Song: "Paint Me A Birmingham" by Tracy Lawrence
Duet Partner/Mentor: Jimmie Allen
Duet Song: "Freedom Was A Highway" by Jimmie Allen & Brad Paisley<
Judges' Comments: Katy says he's the underdog here and, like in the movies, he needs to "take that turn" if he wants to win. Luke was surprised by his pitch problems and gives the note that, if he makes it through, he's going to have to be on point every round. Lionel understands the impulse to keep his body language small but says Cecil needs to channel more "attitude."

Contestant: Willie Spence
Solo Song: "Wind Beneath My Wings" by Bette Midler
Duet Partner/Mentor: Katherine McPhee
Duet Song: "The Prayer" by Celine Dion & Andrea Bocelli
Judges' Comments: Luke says part of being a star is making people fall in love with you, and Luke is in love with him. Lionel says Willie has his own lane and it's "mesmerizing" to watch him, applauding his ability to make every song his own. Katy calls the duet "goosebump central" and thinks he really showcased his levels.

Contestant: Grace Kinstler
Solo Song: "Queen" by Jessie J
Duet Partner/Mentor: Joss Stone
Duet Song: "Midnight Train to Georgia" by Gladys Knight & The Pips
Judges' Comments: Lionel thinks everything she did on stage "a winning package." Katy calls the duet "timeless" and says her voice was soaring. Luke is stoked to have a front row seat to her journey and thought the duet was "incredible."

Come back MONDAY at 8|7c on ABC for the second night of Duets as the other half of the 2021's Top 24 takes the stage for more unforgettable performances!