How to Watch the American Music Awards 2021: Performers, Nominees and More

MRC Live & Alternative and ABC today announced nominees for the "2021 American Music Awards" (AMAs), the world's largest fan-voted awards show. The nominations announcement kicked off with reveals on ABC's "Good Morning America" and Spotify's morning show "The Get Up," with the remaining nominees announced via the AMAs Twitter account. Voting is now open and this year, for the first time ever, fans can vote for all AMA categories on TikTok by searching for "AMAs" in-app. Music's hottest night of the year will feature marquee performances and signature breathtaking moments live from the Microsoft Theater in Los Angeles on Sunday, Nov. 21, at 8:00 p.m. EST/PST on ABC and stream next day on Hulu. 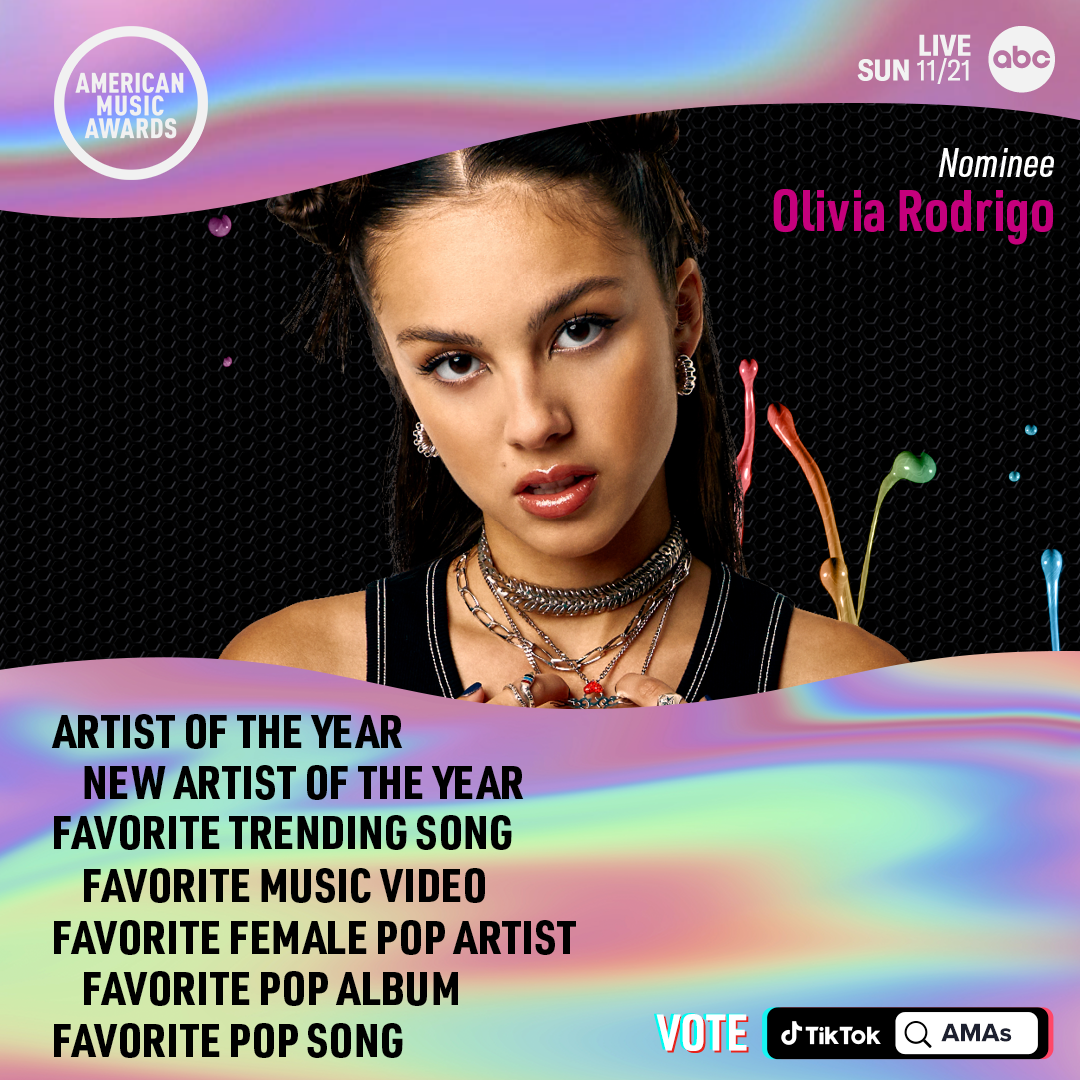 ●      Pop powerhouse Olivia Rodrigo makes her AMAs debut scoring seven nominations, including Artist of the Year and New Artist of The Year, reaching the top-nominee spot.

●      Five-time AMA winner The Weeknd earned six nominations. The superstar will go up against Rodrigo in the Artist of the Year category, as well as Favorite Music Video and Favorite Pop Song.

●      Close behind with five nominations each are Bad Bunny, Doja Cat and Giveon. The Reggaeton superstar dominates in the Latin categories, scoring a double nod for Favorite Latin Album, while Doja Cat, 2020's New Artist of the Year, is recognized in the Favorite Female R&B Artist and Favorite R&B Album categories, among others. First-time nominee Giveon received multiple nominations in his AMA debut, including New Artist of the Year, Favorite Male R&B Artist, and Collaboration of the Year for his hit song with Justin Bieber, "Peaches."

●      Multiple global superstars will battle it out for the night's top honor, Artist of the Year. Nominees in this category include Ariana Grande, BTS, Drake, Olivia Rodrigo, Taylor Swift and The Weeknd. Swift is the current record-holder for most wins in this category with six wins, and holds the record for most AMA wins of all time, 32.

●      New categories this year are Favorite Trending Song, with nominees from TikTok on the year's most viral songs, Favorite Gospel Artist, and Favorite Latin Duo or Group, which rounds out last year's expansion of the Latin categories bringing the total to five in the genre.

●      As it approaches its semicentennial anniversary next year, the AMAs represents the top achievements in music, as determined by the fans. A vibrant night of non-stop music, the AMAs features a powerful lineup featuring first-time collaborations and exclusive world premiere performances from music's biggest names - from Pop to Rap to R&B to Country to Latin to K-Pop – and more, as well as memorable moments that live on in pop culture.

●      As the world's largest fan-voted awards show, the AMAs will air globally across a footprint of linear and digital platforms in over 120 countries and territories.

●      Voting for all awards is now open globally via TikTok. Fans can vote once per category per day by searching "AMAs" on TikTok. You can also access the voting hub by clicking here.

●      Nominees are based on key fan interactions - as reflected on the Billboard charts - including streaming, album sales, song sales and radio airplay. These measurements are tracked by Billboard and its data partner MRC Data, and cover the time period September 25, 2020, through September 23, 2021. The American Music Awards winners are voted entirely by fans.

●      The "2021 American Music Awards" is produced by MRC Live & Alternative and Jesse Collins Entertainment. For the latest American Music Awards news, exclusive content and more, be sure to follow the AMAs on social (Facebook, Twitter, Instagram, TikTok, Snapchat and YouTube), online at theamas.com and ABC.com, and join the conversation by using the official hashtag for the show, #AMAs.