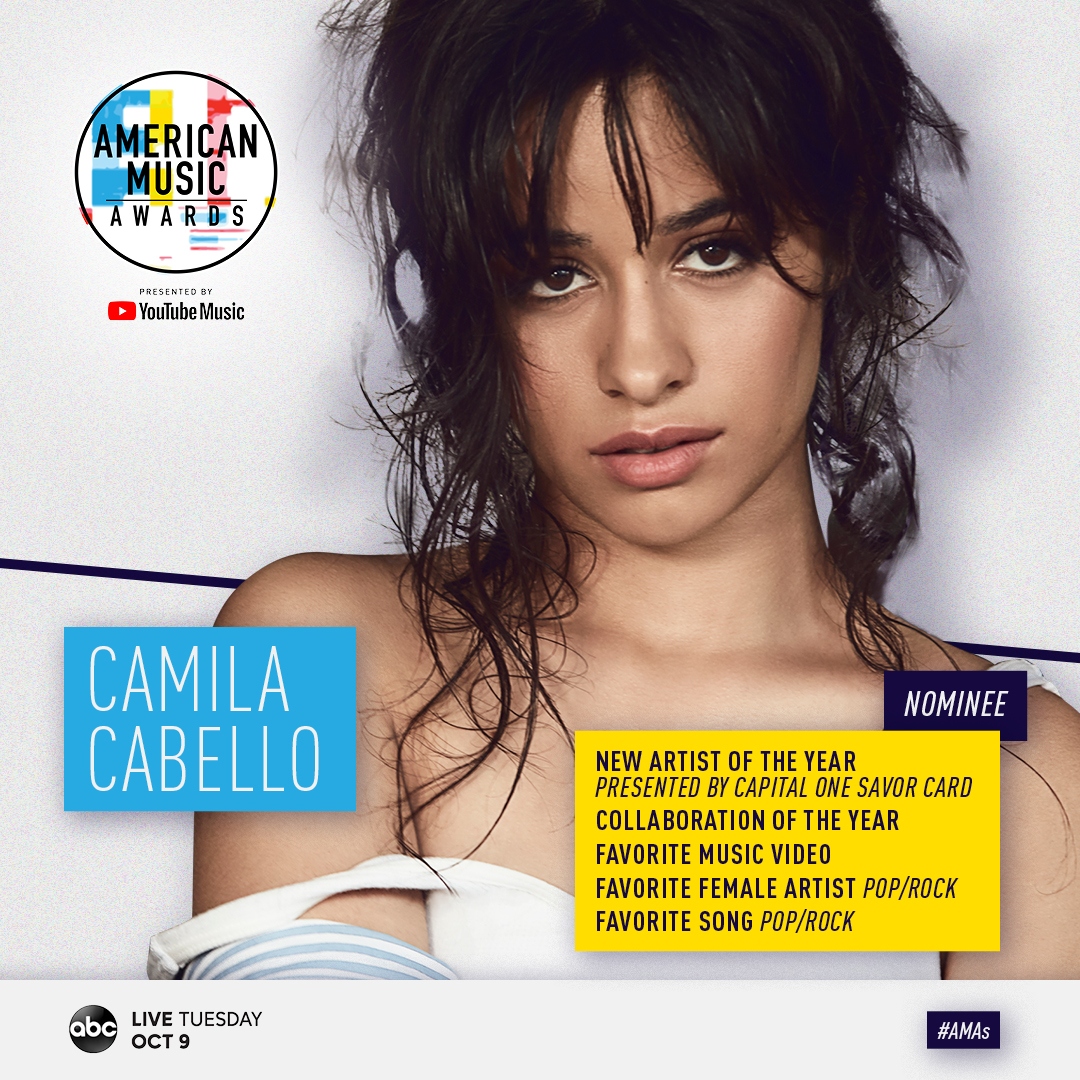 With five 2018 American Music Award nominations this year—including New Artist of the Year presented by Capital One® Savor® Card and Favorite Female Artist - Pop/Rock—Cabello will perform a song from her first studio album Camila, which debuted at No. 1 on the Billboard 200 chart. Shawn Mendes—who took home the accolade for Favorite Artist - Adult Contemporary in 2017 and is again nominated under the category this year—will perform a track from Mendes' self-titled third studio album, which debuted at the top of the Billboard 200 and marked Mendes' third No. 1 album in the United States, alongside multiplatinum selling artist/DJ/producer Zedd. Also a five-time American Music Award nominee, Zedd is nominated for Collaboration of the Year and Favorite Artist – Electronic Dance Music (EDM) this year.

Cuban born singer/songwriter Camila Cabello (Epic Records / SYCO) released her debut solo album, Camila in January 2018 to rave reviews. It debuted at No. 1 on the Billboard 200 chart at the same time as her single "Havana" reached No. 1 on the Billboard Hot 100 chart, making Camila the first solo artist in nearly 15 years to hold the No. 1 spot on both the Hot 100 and Billboard 200 charts simultaneously with their first No. 1. The RIAA gold-certified album, Camila, launched its debut at No. 1 on over 100 iTunes charts around the world, breaking the record for most No. 1 positions for a debut album in iTunes history. Beginning her official solo career after four years in Fifth Harmony, Cabello released her RIAA triple-platinum smash-hit "Havana" in August 2017 where it obtained the No. 1 spot on Billboard's Pop Songs airplay chart, marking her second No. 1 as a solo artist. Furthermore, "Havana" hit No. 1 on iTunes overall top songs chart, No. 2 on the Spotify Global chart and hit No. 1 in 80 countries around the world. "Havana" is the first song by a female artist to go No. 1 on Billboard's Adult Pop Songs, Pop Songs, and Rhythmic Songs airplay charts in 22 years and recently crossed 765 million cumulative streams and attained the longest run at No. 1 on the Pop Songs chart by a female artist in a lead role in nearly five years. Her next single, "Never Be the Same," was released in January 2018 and peaked in the top 10 of the Billboard Hot 100 chart. Cabello had already earned a chart-topping smash with her recent double platinum-certified hit "Bad Things" with MGK. The track generated over 240 million Spotify streams.

Toronto-born multiplatinum singer/songwriter Shawn Mendes released his highly anticipated self-titled third album in May 2018. The album debuted at No. 1 on the Billboard 200 albums chart as well as multiple additional worldwide markets, including Australia, Canada, Mexico, Belgium, Holland & more. Shawn Mendes made Shawn the third youngest solo artist to ever have three No. 1 albums on the Billboard 200, and became one of the top best-selling album debuts of 2018. The album shot to No. 1 on iTunes upon release in over 80 countries around the world. Leading up to the album, he released multiple tracks including "Youth" featuring Khalid, "In My Blood" and "Lost In Japan." Both "In My Blood" and "Lost In Japan," the first two songs released off the new album, experienced massive success, soaring to the No. 1 and No. 2 spots on the overall iTunes chart in the U.S, Top 5 on iTunes in 50 countries, and held the No. 1 and No. 2 spots on Spotify's "New Music Friday" playlist. With "In My Blood," Shawn became the first artist to ever have had four No. 1 singles on Billboard's Adult Pop Songs airplay chart before the age of 20. In April 2017, Shawn released his 3x platinum hit "There's Nothing Holdin' Me Back." The track scored Shawn his second No. 1 single Billboard's Pop Songs chart, joining 7x platinum single "Stitches." Throughout his career, Shawn has achieved 3 consecutive No. 1 album debuts, 2 platinum albums, and 8 consecutive platinum and multiplatinum singles. Worldwide, he has sold over 12 million albums, 100 million singles, and has amassed over 16 billion song streams and 5 billion YouTube views. Shawn has completed two sold-out world tours with over 1 million tickets sold, selling out legendary arenas including NYC's Madison Square Garden, Toronto's Air Canada Centre, and London's O2 Arena in minutes. Shawn Mendes: The Tour begins in March 2019, with over 60 dates currently announced across Europe, North America and Australia, with more to be announced soon. He topped Billboard's "21 Under 21" in 2017 and has been featured on Forbes "30 Under 30," Spotify's "25 Under 25," and Time Magazine's "Time 100 Most Influential". In February 2018, ROI Influencer Media recognized Shawn as the No. 1 Most Influential Artist and No. 1 Most Influential Teen across all social media platforms.

Multiplatinum, GRAMMY® Award-winning artist/DJ/producer Zedd made his debut with Clarity after signing with Interscope in 2012 and has been breaking down barriers surrounding music genres ever since. This fall, Zedd has teamed up with Shawn Mendes for a remix of "Lost In Japan" from Shawn's latest album. The remix is the follow up to Zedd's 2018 singles, "Happy Now" with Elley Duhé and his monster hit, "The Middle" with Maren Morris and Grey. Zedd released "The Middle" in January 2018, and earned him his second No. 1 on Billboard's Pop Songs airplay chart. "The Middle" held the top spot for seven weeks and has spent 35 weeks on the Billboard Hot 100. Digitally, the song has amassed over 1 billion streams. In 2017, Zedd released "Stay" with Alessia Cara, which held the No. 1 spot on the Pop Songs airplay chart for six consecutive weeks and earned Zedd his second GRAMMY nomination. In 2015, Zedd released True Colors, which debuted at No. 4 on the Billboard 200 albums chart. Throughout his career, Zedd has worked with a diverse range of artists to create hits, including Hayley Williams on platinum hit "Stay The Night," which racked up more than 400 million streams, and Selena Gomez on platinum track "I Want You to Know," which spent six weeks at No. 1 on Billboard's Hot Dance/Electronic Songs chart.

The American Music Awards winners are voted entirely by fans. Voting is now open in all categories. For New Artist of the Year presented by Capital One® Savor® Card, Favorite Social Artist presented by Xfinity and Collaboration of the Year, fans can vote for each award 100 times per day, per voting platform in one or both of the ways below. Fans can vote for all other awards once per day, per voting platform. You can cast your votes for the AMAs now by going to voteamas.com or by posting a tweet on Twitter that includes the nominee's name or Twitter handle, the category name, and #AMAs within the tweet.