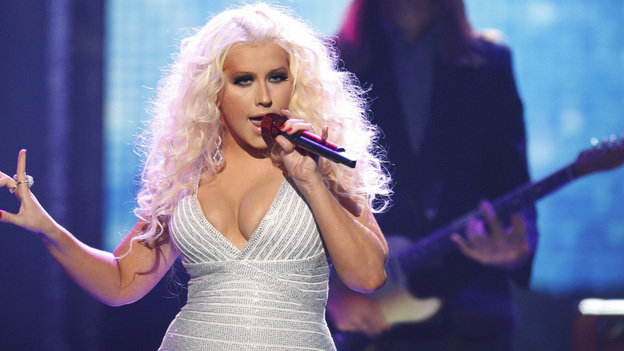 dick clark productions and ABC announced today that singer, songwriter and actress Christina Aguilera will pay tribute to Whitney Houston and music from the successful film-turned-pop culture phenomenon, "The Bodyguard," at the "2017 American Music Awards."

The multitalented songstress' tribute, which will feature memorable tracks from "The Bodyguard: Original Soundtrack Album," comes on the eve of the 25th anniversary of the film, which was released on November 25, 1992, and starred one of Aguilera's all-time favorite artists, the late Whitney Houston. Houston won 22 American Music Awards, including eight in a single year, making her the most awarded female vocalist of all time.

A fan favorite and true pop icon, Aguilera has treated fans to an array of American Music Awards performances throughout the years including her first AMA performance in 2000 with the hit singles "What a Girl Wants" and "I Turn to You," her knockout medley of "Ain't No Other Man," "Beautiful," "Dirrty," "Genie In a Bottle" and "Keeps Gettin' Better" in 2008, as well as her most recent performance of the moving piano ballad "Say Something" with A Great Big World in 2013.

Viola Davis will be on hand to introduce Aguilera for this unforgettable homage.

The "2017 American Music Awards," the world's largest fan-voted awards show where music enthusiasts watch their favorite artists and pop culture icons come together to honor idols, newcomers and record breakers in the contemporary music scene, will celebrate 45 years of music live from the Microsoft Theater in Los Angeles on SUNDAY, November 19, at 8|7c on ABC.

"Whitney herself stated in 2001 that Christina Aguilera sang the best version of her song 'Run To You,'" said the Estate of Whitney E. Houston. "It is with great appreciation and honor that she is returning to participate on the American Music Awards for a special tribute honoring the 25th anniversary of 'The Bodyguard.' Whitney said that Christina is, without a doubt, one of the best voices she enjoyed in this generation of music. From the Estate of Whitney E. Houston, we thank you with great joy!"

"I am honored and humbled to be asked to participate in such a special tribute of a timeless soundtrack that has been a huge inspiration not only in my own personal life and career but to countless aspiring singers – touching music lovers worldwide and influencing the history of music itself," said Christina Aguilera. "To be honoring THE one and only Whitney Houston is a blessing, and I am grateful to celebrate the spirit of her songs and legend that lives on. I feel eternally fortunate to have personally met her on and off the stage. My deep appreciation for her kindness to me while coming up in the business – her graciousness, generosity, humanity and beauty – lived up to everything I could have hoped for in meeting my idol and will forever be cherished in my memory of her."

Originally released on November 17, 1992, "The Bodyguard: Original Soundtrack Album" – co-executive produced by Whitney Houston and Clive Davis – was the first album verified by SoundScan to sell more than one million copies in a single week, won the Grammy® Award for Album of the Year, has sold more than 45 million copies worldwide (and is certified 17x Platinum in the U.S. by the RIAA) and is the top-selling soundtrack album of all time.

"The Bodyguard" marked Whitney's debut as a movie star while the soundtrack – driven in part by Whitney's monumental interpretation of "I Will Always Love You" – became of one of the best-selling albums of any genre in history. Legacy Recordings (in cooperation with The Estate of Whitney E. Houston) is celebrating the 25th anniversary with the release of "Whitney Houston – I Wish You Love: More From The Bodyguard" on November 17, 2017, which includes never-before-released live recordings from Whitney's historic The Bodyguard Tour (1993-1995); alternate versions of the audio recordings from the "The Bodyguard" film; an alternate version of a remix of "I'm Every Woman"; additional artwork and more.

Singer, songwriter, performer, producer, director and actress, Christina Aguilera, is one of the most accomplished performers of the last decade. She has sold more than 43 million albums worldwide, achieved four No. 1 singles on the Billboard Hot 100 chart, three top five albums in the United States, and has won six Grammy Awards. She has collaborated with other legendary artists including Herbie Hancock, Andrea Bocelli, Tony Bennett, Elton John and The Rolling Stones.  Aguilera was also the only artist under 30 to make Rolling Stone Magazine's list of 100 greatest singers of all time and was named one of Time Magazine's Most Influential People in 2013.

The New York native's trajectory from performing in local talent shows in Pennsylvania, where she grew up, to getting her big break on "Star Search" in 1992 to landing a part on the Disney Channel's "The New Mickey Mouse Club," is well known. It was her song "Reflection" for Disney's "Mulan" that led to a record deal with RCA and the release of her self-titled debut album in the summer of 1999. The album quickly hit No. 1 on the strength of its first dance/pop single, "Genie In A Bottle" (which dominated the charts for five weeks and broke records worldwide) and other chart toppers including "What A Girl Wants" and "Come on Over." She has gone on to win multiple awards including a Grammy Award for Best New Artist, Best Pop Collaboration with Vocals, Best Female Pop Vocal Performance, to name a few. Among countless other honors, she is also the recipient of a 2001 Latin Grammy Award for "Mi Reflejo" (Best Female Pop Vocal Album), a 2000 Billboard Music Award for Female Artist of the Year, and two 2004 Rolling Stone Music Awards (Best Female Performer, Readers' Pick; and Best Tour, Readers' Pick, "Justified and Stripped"). In 2010, Christina added a new role to her list of accomplishments, the role of actress. She starred in her first feature film "Burlesque," opposite Cher and Stanley Tucci which earned a Golden Globe Nomination for her Original Song, "Bound to You" which she co-wrote and performed. In 2011 Aguilera made her way to television showcasing her mentoring side as she coached young hopefuls in the effort to beat out her fellow coaches on the NBC series "The Voice." The show was an immediate success breaking television ratings records and winning multiple Emmy® Awards. In 2015, she made her way back to acting starring as Jade St. John in the ABC hit series "Nashville." In addition, in 2017, she wrapped shooting "Zoe" starring Ewan McGregor and appeared as the voice of Akiko Glitter in the summer Sony release, "The Emoji Movie."

As previously announced, music legend Diana Ross will take the stage at the "2017 American Music Awards" for a rare performance, where she will also be honored with the "American Music Award for Lifetime Achievement" in recognition of her remarkable career and her outstanding artistic contributions to the entertainment industry and popular culture. Additionally, multiplatinum pop superstar Selena Gomez will treat fans to the world television premiere of her brand-new single, "Wolves."