Graduation 2020: For Chicago. By Chicago.

The ceremony will air on Sunday, June 14 at 1:00 p.m CT and will be hosted by Chicago's "Hamilton" star, Miguel Cervantes and include a commencement speech by Oprah Winfrey.

The star-studded lineup also includes confirmed appearances by Governor JB Pritzker, "The Voice's" Katie Kadan performing the national anthem, as well as a performance by Chicago's own hip-hop recording artist, Common, as well as many other special performances.

The televised event will capture the citywide pride Chicago has in its graduates, with tributes from well-known Chicagoans like Mayor Lori Lightfoot, Chicago's professional sports stars and extraordinary high school students. Thanks to an online social campaign, ABC 7 received hundreds of student's, "Pomp and Circumstance Graduation Walk" videos that will be paired with music produced by Chicago's DJ Hot Rod as part of the graduation ceremony. 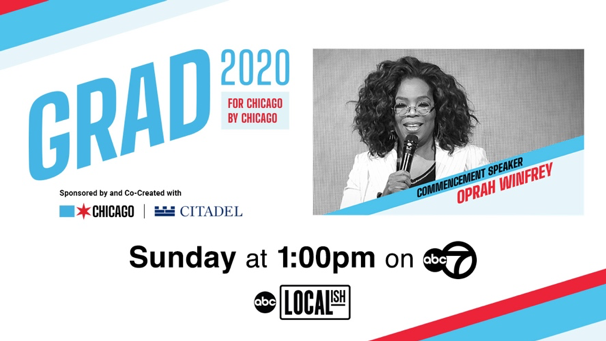