The Bachelorette 2019 Recap, Week 8: Will Luke Stay in His Lane?

Bad news: There's plenty of it to go around on The Bachelorette. This week, as the gang traveled to the Netherlands and time draws near for Bachelorette Hannah Brown to make her final choice, she had to deliver bad news to a few guys who were hoping Hannah might be the love of their life. Meanwhile, Garrett and Luke P. are each sure that the other's mere existence is bad news, and will do just about anything to convince Hannah of the same. So who continued their journey and who became old news? You can stream The Bachelorette 2019 Week 8 here on ABC.com or in the ABC app, or just continue reading this Bachelorette recap for this week's highlights!

Ugh, we regretted it as soon as we typed it, guys. But yes, first up for Hannah in the Netherlands was a 1-on-1 with Jed. These two have already had a successful 1-on-1 date in Boston, so they were looking to build on that with a day in Amsterdam. They take a gondola ride, dance in the streets, go nowhere near the red light district...all the typical Amsterdammy things. Hannah usually has trouble getting these guys to open up, but at dinner, Hannah actually says she wishes she could be as open as Jed has been. And then she drops some news of her own: She's falling in love with Jed. So we're headed to Nashville next week for Jed's hometown date.

Hannah's next 1-on-1 is with Tyler. They saddle up to ride horses around the city to see some sights. Only problem is that these horses don't want to cooperate, walking into each other, and into things, and basically everywhere but where these two want to go. Eventually Hannah wonders...is this a sign? 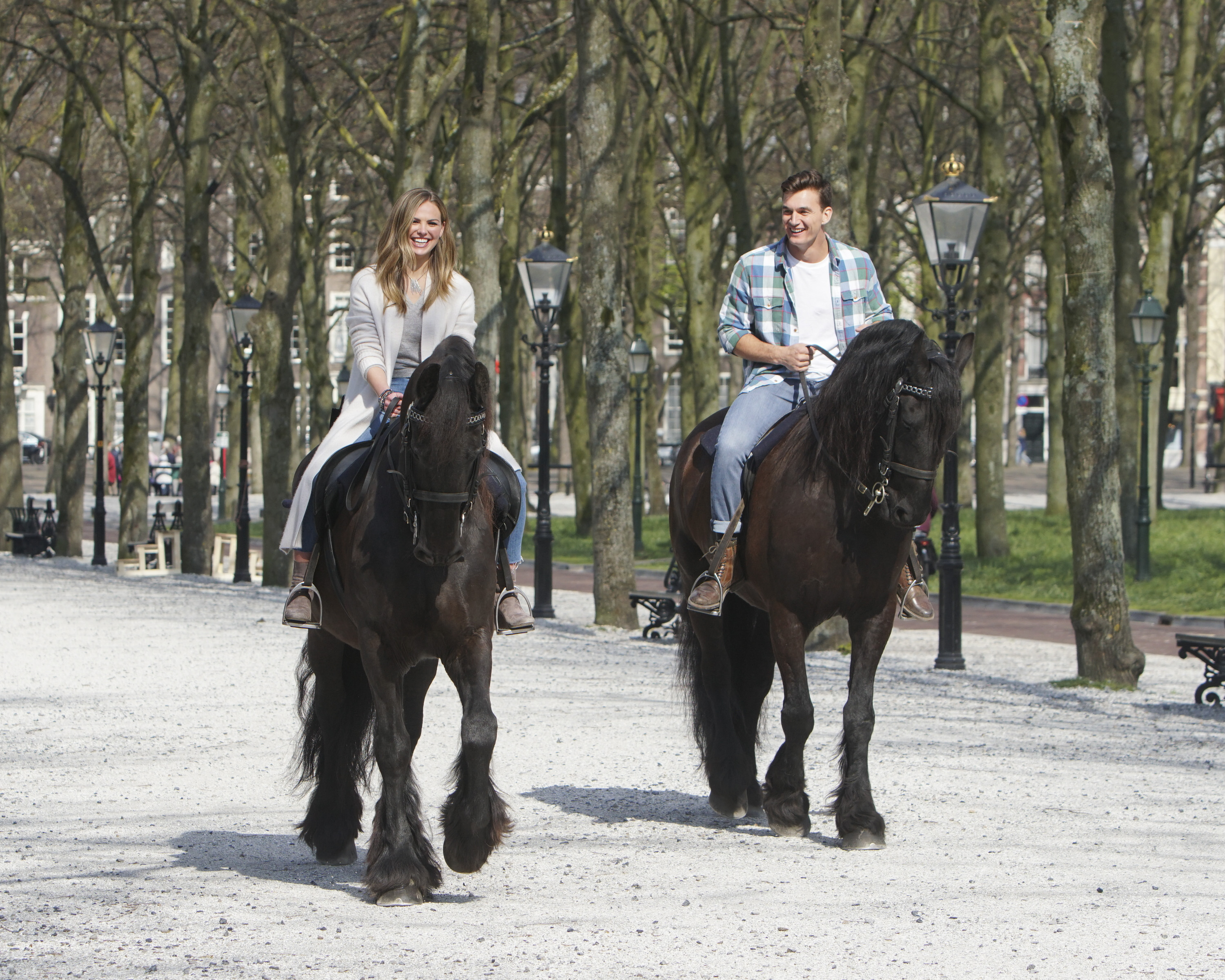 Nope. At dinner Tyler really opens up about his family and his fears and lots of stuff that Hannah likes to hear. He gets a rose and we'll be seeing Jupiter, FL, next week too.

Geez, I guess we're really mailing in the headers this week, huh? Anyway, remember how we said there was bad news? Well, welcome to the bad news portion of the recap. When Connor's name wasn't on the next date card—Mike received that honor—he decided to make some 1-on-1 time of his own with Hannah. It didn't go well:

Oof. If it makes you feel better, Connor, the 1-on-1 date you missed out on didn't go well for Mike either. After a day of making art of each other and having art made of themselves and looking at even more art, Hannah decided she wanted to—sorry in advance—p-art ways:

Breezing past that lazy header without trying to justify it—honestly, that doesn't even really make sense here—the 3-on-1 date with Garrett, Luke P. and Peter was guaranteed to contain some drama. With Connor gone, there were 3 guys and 2 roses. But like, nothing dramatic would happen here, right? They all know this is about love and they're gonna focus on that, right? Oh:

Instead of staying in their lanes, Garrett and Luke turn this date into a highway pile-up real quick. Peter stays out of it, and wisely—Hannah gives him the first rose of the night, so we'll be seeing his hometown next week.

At dinner, the boys regroup and keep their focus on Hannah. Garrett says he's in love with her. Luke opens up to Hannah and gives her an important piece of his past:

But in the end, she could only keep one. And despite the endless drama and the hate and the fighting, Hannah felt like Luke really opened up to her on this evening, and Garrett was sent home.