The Bachelorette Finale 2019 Part 2 Recap: Who Did Hannah Pick and What Happened Next?

It's proposal time! We've waited all season for this. I mean, sure, Hannah's been waiting for this moment for her entire life, but I still think we get some credit.

Hannah is ready. She's scared, but she's ready. She says that Tyler always puts her first, and she feels secure with him. She says that she and Jed are always honest with each other. The guys both pick out their rings.

We haven't had a runaway lead since...oh, since last season of The Bachelor, like four months ago, when Colton jumped the fence. Still. That was pretty dramatic. But once she dusts herself off, it seems like Hannah knows what she wants, and that she just had a quick bout of nerves. She legit looks ready to do this.

She knows she's going to have to pretty thoroughly and substantially break one of their hearts today, but that's the price of everlasting love. So whose heart is going to be broken?

As always with this unflappable hunk of pure delight, he's nothing but sunshine and positivity stepping out of the van while chatting with Chris Harrison. But then:

Can't imagine there's ever been a more heartbreaking utterance of "Tyler..." in the history of civilization than when Hannah uses his name to cut him off. Tyler says it hurts but he'll always be her biggest fan. In case you were ever curious about what it looks like when you've been shot through the heart, here you go: 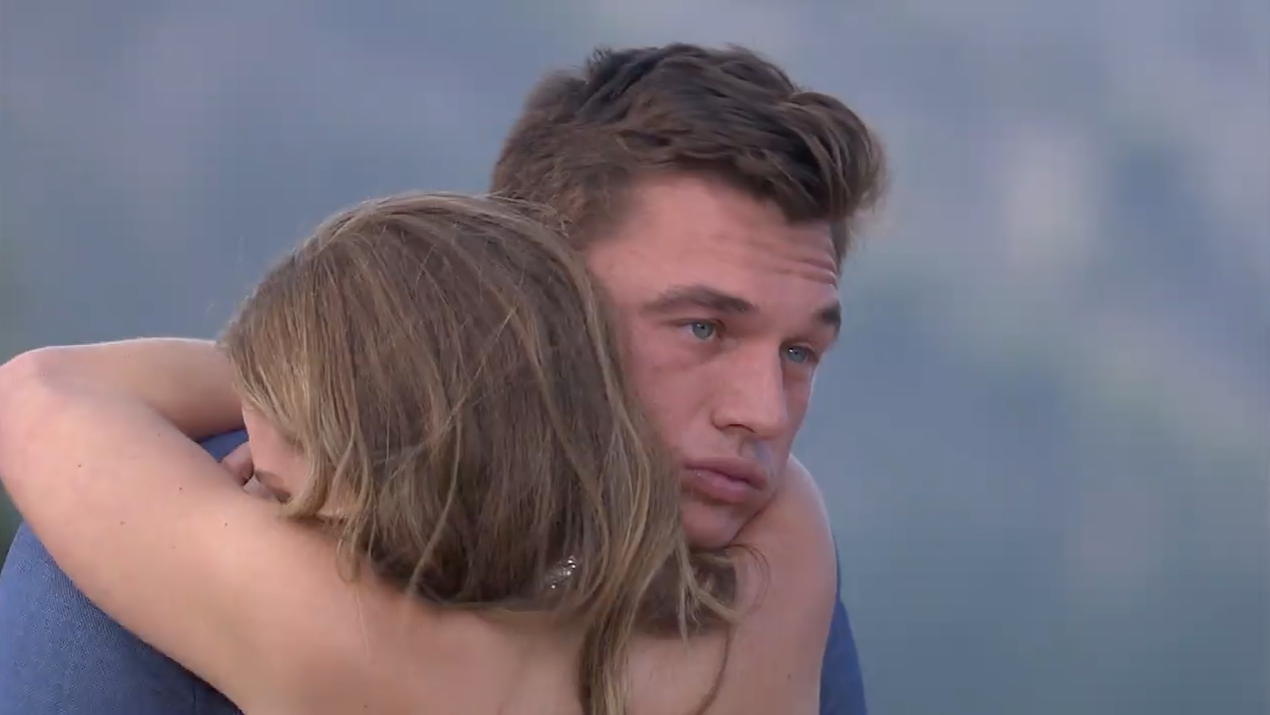 The Main Event: A Proposal

Breakups are hard and that wasn't easy to watch, but we're here for a proposal so let's get right to it. By this point we know it's Jed, so we'll just toss you into the big moment:

And that, friends, is what we call in this ol' business of show a "false ending." Because things are just starting to get juicy. Chris Harrison even said that in retrospect, this proposal could be called "cringeworthy."

It seems that on the second night of their engagement, Jed told Hannah that he had been hanging out with a girl a week before the show started. He broke it off, no biggie. Hannah is kind of irritated, but moves on. Then Hannah hears that there's a magazine article all about Jed's relationship, including the little quibble that he hadn't technically ended it before he came on the show. Hannah is questioning everything. She knows she has to talk to him face-to-face about all of this to be able to move forward.

Back in L.A., after all of this stuff goes down, Jed and Hannah meet up to discuss what's next. Hannah makes it clear that this is the time to come clean.

She asks him to tell the story of this girl. He says that they weren't exclusive, but they were sleeping together, going on cabin trips together, she met his parents, she threw him a surprise party, and her parents bought them a trip to the Bahamas. Hannah's not loving the story so far. Jed says he told the other woman that the show would be good for his music, and that before he left—and after he'd been drinking—he told her that he loved her. He said it didn't feel right, but it happened nonetheless. He says that to him, coming on the show was a goodbye to their relationship. Not verbally, but in his heart.

Honestly, you really just have to watch the full episode to get the full extent of Hannah's fierceness on this topic, because it's breathtaking. (Watch here!)

Hannah wonders what Jed was thinking while she was calling out Scott for having a girlfriend on Night One. Hannah was also irritated that Jed had told his friends that he "won" on The Bachelorette, and wonders if all of this was a game to him. She says some of this helps explain why his family didn't seem too excited about the prospect of Hannah and Jed getting engaged. Either way, she doesn't feel like any of this is what she said "yes" to that day in Greece:

Hannah comes out and tells Chris that her life has been tough since then. She's cried, she's yelled, she's questioned her entire life. And then she breaks the news: She's not with Jed anymore. The engagement is fully off. She wanted honesty and trust, and that's not what she got. So that was that. And now Jed is here, and this will be the first time they've seen each other since the breakup. You know what that means...

Jed walks out to silence from the crowd. He kicks it off with an apology: He regrets that his behavior and his actions ruined their relationship, because he truly fell in love with Hannah. He's sorry for his selfish behavior and the ripple effect it's had on friends, family, everyone. He says that when he was initially pressed for details about the other woman shortly after their engagement, he didn't tell Hannah the full story because he was acting out of fear instead of respect for Hannah—he didn't want to lose her. It seems heartfelt, and Hannah accepts his apology.

Unfortunately for Jed, her feelings have changed, and she's not in love with him like that any more. She says she's not trying to punish him, she just doesn't believe it's something that can be mended. He hates that it's not him, but he says he hopes she has a happy life. Furthermore, Hannah is proud of herself. If you ever need a pick-me-up, just listen to Hannah's fierce love for herself right here:

So, no engagement, sure...but renewed confidence and a strong sense of self? Not a bad deal, really.

Now, if you've been paying attention, there's one person we haven't talked to yet: Tyler.

Chris asks Hannah how she feels about the man she sent home at the beginning of this episode, and she says her feelings for him haven't just gone away. Chris says they're gonna bring him out—and he's not sure what's going to happen.

Well the first thing that happens is every person in the joint screams for a good long while. It seems Tyler has a few fans in Bachelor Nation. For his part, Tyler is excited to see Hannah. He says he's enjoyed watching the season because he loves watching her just be a powerful, strong woman. He's sure she'll bounce back because "The world is hers, and I know that."

So back to those feelings Hannah kinda sorta maybe still had for Tyler. Is there...you know...a possible future in there? Watch:

Drinks then? After that wild finale, we sure need one.

And that's a wrap! Don't forget to watch the first week of Bachelor in Paradise MONDAY & TUESDAY 8|7c! Here's a preview of all the insane action you'll find on the beach:

If you read all that, we hereby ordain you as fully equipped to answer "What happened on The Bachelorette finale?" questions at work or school today. And if you just can't get enough Bachelorette, you can watch Hannah chat about the finale with Jimmy Kimmel here. See you next season!