As the temperature cools down, the holiday season warms up with The Great Christmas Light Fight 2019, airing two back-to-back episodes every Monday night for three consecutive weeks starting MONDAY DEC 2 8|7c on ABC! Produced by Fremantle, the immensely popular series features returning celebrity judges: lifestyle expert Carter Oosterhouse and famed interior designer Taniya Nayak. Season seven of the holiday hit will once again showcase the most extravagant and utterly spectacular Christmas displays America has to offer! In each one-hour episode, four families with dazzling household displays will compete to win $50,000 and join previous The Great Christmas Light Fight winners as holders of the coveted Light Fight trophy. This season, viewers will also be treated to a second round of the special heavyweights episode, featuring light shows so massive, they extend well beyond household frames. Additionally, peek inside featured family homes for an impressive batch of unique interior Christmas displays, as judges Oosterhouse and Nayak lead the way in another year of over-the-top holiday cheer. Keep scrolling for The Great Christmas Light Fight season 7 schedule!

Get a sneak peek at season 7 of The Great Christmas Light Fight!

"701" (8:00-9:00 p.m. EST) – Let the holiday festivities begin! First to showcase their spectacular holiday displays are the Brewster family with their "Christmas in New York City" themed display, featuring a Herald Square stage with dancers inspired by The Rockettes and a massive Rockefeller Center tree in Brewerton, New York; the Chiles family with a "Miracle of a Million Lights" display covering outside and inside of an 1880s-era mansion with 60-foot-tall candy cane trees and a life-size snow globe in Portland, Oregon; the Sanda twins who combine their sophisticated DIY skills to create a unique freeform lighting technique never before seen on the show, featuring handmade motorized controls that create the illusion of twinkling lights and a nativity scene starring a homemade animatronic Santa bearing gifts in Glendale, Arizona; and the Rose family with their heartfelt holiday display covering every square inch of their house, featuring sensational handmade gingerbread cutouts, an inflatable hugging bear and a special garden area dedicated to the memory of their daughter in Hazlet, New Jersey. Tune in as judge Taniya Nayak makes the tough decision of who will be the first to walk away with $50,000 and the coveted Christmas Light trophy this holiday season on ABC's The Great Christmas Light Fight. Watch this episode right here on ABC.com! 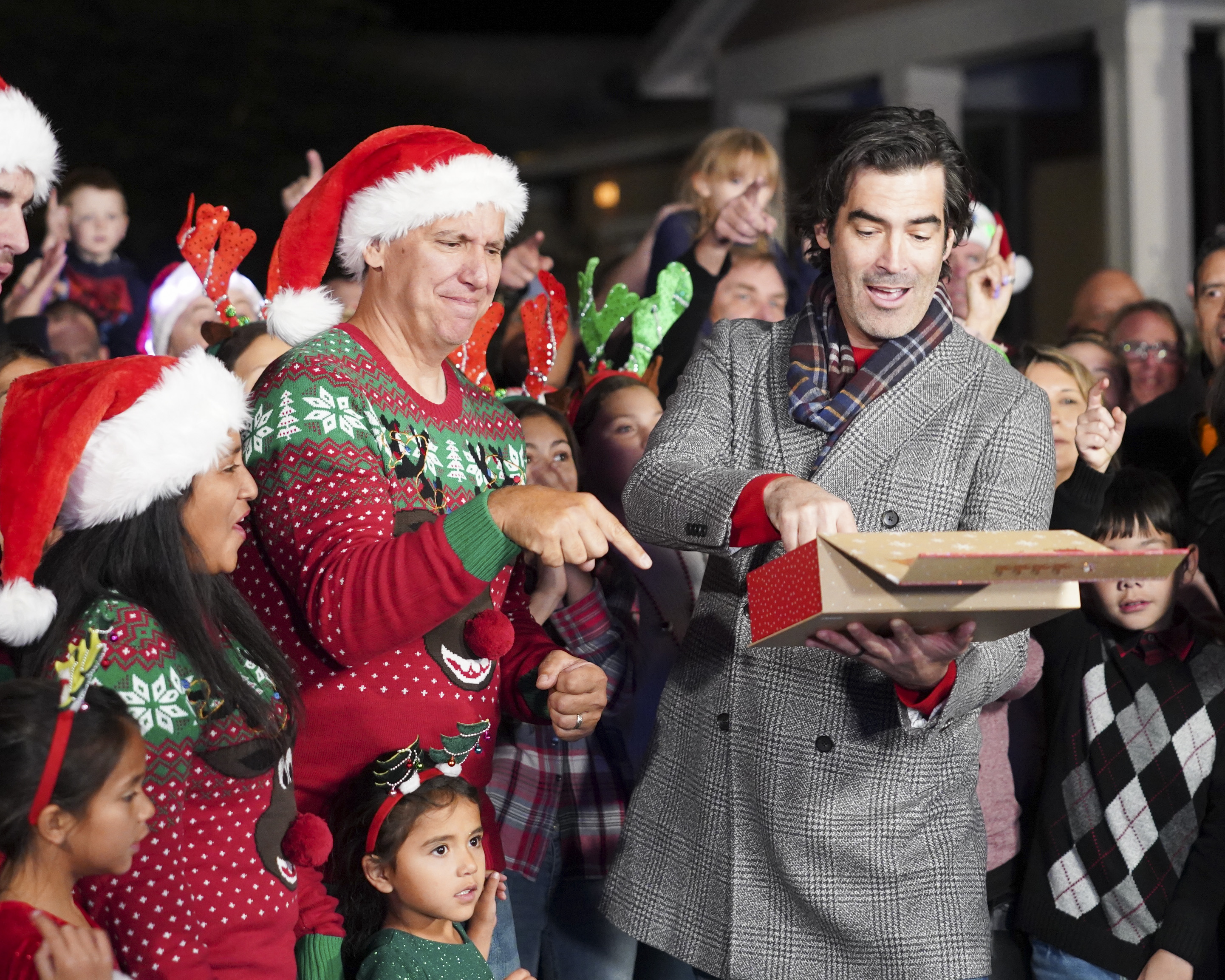 "704" (9:00-10:00 p.m. EST) – The festivities continue with the Torres family's pirate-themed Caribbean Christmas display, featuring a two-story handcrafted castle that covers the façade of their house, a life-sized pirate ship with cannons and a 35-foot mast in Henderson, Nevada; the Murphy family, with the help of their art class students, transforming their house into Christmas art with over 400 precisely cut figurines, 75 extravagant scenes and a massive 25-year-old Cinderella castle in West Frankfort, Illinois; the Howard family with an incredible light show that incorporates a giant multicolored mega tree and a violin playing as if it's floating in the air in Fillmore, California; and the Taylor family with their magical forest display spanning across three acres, including over 50 beautifully lit trees covered in 500,000 lights and a 90-foot tree with 23,000 lights brightening up the massive wonderland in Henderson, Nevada. Watch as judge Carter Oosterhouse decides who Christmas will come early for as the winner of ABC's The Great Christmas Light Fight. Watch this episode right here on ABC.com!

"703" (8:00-9:00 p.m. EST) – Kicking off the long-awaited "heavyweights" division episode with spectacular holiday displays is the Bentley family with "Bentleyville," a 22-acre decorated city park with 5 million lights, over 200 enormous wireframes and the tallest man-made mega tree in the country, standing at 128 ft tall in Duluth, Minnesota; the Winter family with "Cambria Christmas Market," a Germany meets California whimsical display, filled with gift shops and food stalls, plus an enchanted forest spread over 25 acres featuring larger-than-life ornaments, a replica of the Golden Gate bridge and more in Cambria, California; the An family with "Magical Winter Lights," one of the most unique displays to ever be seen on the show, combining the traditional American Christmas with the ancient Chinese light festival, made entirely of delicate, intricately designed Chinese lanterns, including a "Light Fight" record-breaking 6 million lights on 20 acres in Houston, Texas; and Kenny Irwin with "Robolights," an industrial Christmas land made out of robots built from recycled materials, including a candy cane palace, a tower of gifts, amusement park rides turned into sculptures, a 10,000 watt robot sculpture, and a Santa ditching his sleigh for a spicy masala chuck wagon stagecoach in Palm Springs, California. Who will walk away with $50,000 and the coveted Christmas Light trophy? Tune in to watch judge Taniya Nayak make the decision on ABC's "The Great Christmas Light Fight!"

"706" (9:00-10:00 p.m. EST) – In the second episode of the evening, four festive families showcase their displays, including the Nagy family with their high energy, high-tech light show dedicated to their dog, Prince, and packed with a towering joy sign retrofitted with color-changing pixel lights, a ballet of snowflakes on the roof and Mr. Frost, an interactive talking snowman made from a 6 ft tall beach ball in Waterford Township, Michigan; the Nirschl family with their heartwarming Christmas display, dedicated to family and all the things they love, including inflatables, a magical archway with over 500,000 lights, and a festive interior entirely covered in Santas in Daytona Beach, Florida; the Maywald family with their magical display, featuring fireworks lighting up nostalgic scenes that will take you to Christmas past, over 300 blow molds, a vintage Christmas storeroom, and DIY favorites like a snowman built from tires in Austin, Texas; and the Banda family with their charming handmade Christmas town, "Northopolis," which includes a PVC pipe and cloth constructed lightweight mobile display that they reassemble every evening during the holiday season, and a bigger-than-life Santa, reindeer and wise men in Weslaco, Texas. Don't miss judge Carter Oosterhouse decide who will win $50,000 and the coveted Light Fight trophy on ABC's "The Great Christmas Light Fight."

"702" (8:00-9:00 p.m. EST) – Four festive families from across America showcase their incredible displays, including the Miranda family with their synchronized pixel light show, homemade 3D-printed parts and two matrix displays with green screen video effects of their children dancing in Edmond, Oklahoma; the DeGennaro family with a North Pole in the desert nodding their 30-year love story and featuring eight DIY reindeer, a candy river with homemade Gingerbread men on the outside and over 1,700 decorations stacked from floor to ceiling on the inside in Las Vegas, Nevada; the Sowell family with their 15-acre farmland display holding over 1 million lights to create a beach scene with actual Florida beach sand, a carnival scene with a homemade Ferris wheel, an automated Santa kissing Mrs. Claus and a nativity scene with live people, a camel and zebras in Milton, Florida; and the Beltran family with their winter wonderland including over 40 mounted rooftop decorations and a vintage Nativity scene, wireframes and blow molds covering their entire yard in Moreno Valley, California. Tune in to see judge Carter Oosterhouse choose the winner of $50,000 and the coveted Light Fight trophy on ABC's "The Great Christmas Light Fight."

"705" (9:00-10:00 p.m. EST) – The holiday festivities conclude in the final episode of the season with the Cottrell family and their extravagant display made by 89-year old Calvin Cottrell and his family featuring a tractor ride around four acres of beautifully handcrafted signs, a homemade barn for their Nativity scene, an extraordinary Ferris wheel with bright bear blow molds and a 47-year old Mega Tree with its original lights in Rossville, Indiana; the Hudgins family with their combination of humor and artistry that helped to create perfectly designed character cutouts, elf houses with animated characters, hand-painted blow molds and Gingerbread men that celebrate every person in their family in Mechanicsville, Virginia; the Rombeiro family who have continued their 27-year old family tradition despite their father's stroke, with reindeer that sway in the wind to look like they are flying, a motorized Santa blow mold that moves and a massive arch over the driveway created by combining two trees, plus an interior filled with themed rooms and a handmade train village in Novato, California; and college sweethearts, the Jones family, who put their year-round love for Christmas on display with 47 oak trees and 400,000 lights, creating a massive, magical light show with beautifully colored tree trunks, dancing arches, a hand-built Nativity and the word "Joy" in 7-foot letters right smack in the middle of their yard in Boerne, Texas. Who will walk away with $50,000 and the coveted Light Fight trophy? Tune in to watch judge Taniya Nayak make the final decision on ABC's "The Great Christmas Light Fight."

Watch full episodes of The Great Christmas Light Fight the day after they air on ABC.com, the ABC app, and Hulu!