Click here to pre-order now and get "Stop Where You Are" instantly! 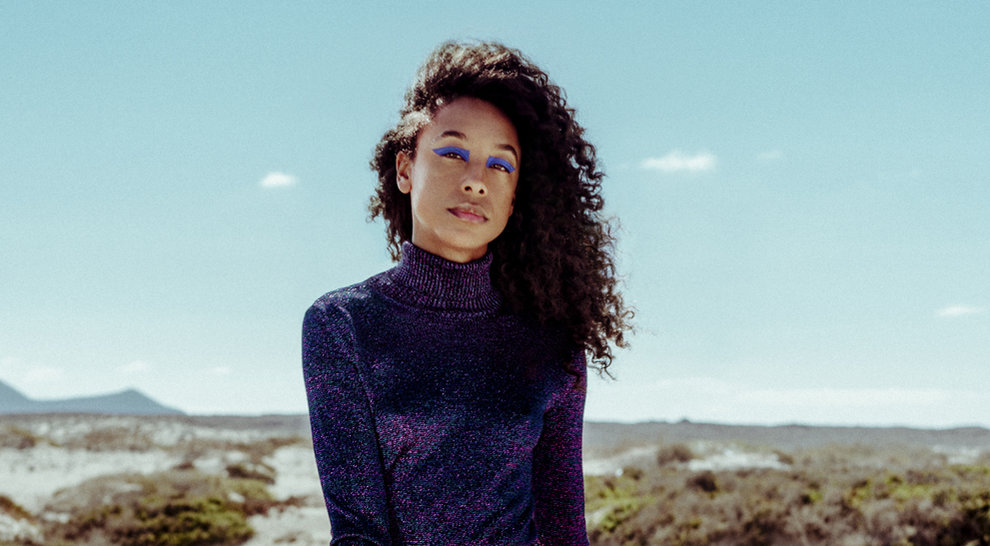 "How does the heart speak to us?
It speaks through Nature, Dreams, the Body and Instinct…
These songs are mystical, elemental and concerned with transformation, verdant with lifeblood and cosmic nature.
For me this album is vital, and life-affirming"
Corinne Bailey Rae, January 2016

Corinne Bailey Rae has been away. Geographically, professionally, elementally, personally – the double-Grammy-winning, Mercury-nominated, five-million-albums-selling artist has travelled far, and wide, and deep.

She has journeyed from Indonesia to Brazil, from The White House to Paris, through explorations of the Los Angeles soul underground and the New York outsider performance scene. There were full-fathom dives to the beating heart of everything that makes her a musician. Burrowing inwards at home in Leeds, UK, she built her own studio – a place to play, in every sense of the term.

As the title of her brilliant new album has it, The Heart Speaks In Whispers, and to hear it you have to go all the way…

And as Bailey Rae notes – by way of explaining her choice of title and its meaning to her – "In ancient Egypt the letter or hieroglyphic for the word 'heart' was a heart-shaped vessel. The heart 'held' memory, truth… It was the centre of the personality, of understanding, of will and thought as well as creative imagination. It's how we in the west now view the mind."

Little wonder, in some ways, that it's been over five years since the release of Bailey Rae's acclaimed second album, The Sea; an album garlanded with praise, Mercury Music Prize-nominated and a Top 5 hit in the UK and Top 10 in the US. The end of that album cycle saw Bailey Rae's subsequent EP Is This Love win a Grammy, before she retreated from public view. It was her second disappearing act.

Bailey Rae had first shot to enormous global fame and acclaim when, at the start of 2006, her self-titled debut album featuring hit singles such as 'Put Your Records On' and 'Like A Star' entered the UK charts at Number One and reached Number Four on the US charts. She became the first British female singer-songwriter to debut in the Billboard Top 20 in decades, pre-dating the wave of British females to follow; Amy, Lily, Ellie, Adele….

But the loss of her first husband two years later kept her from public view until The Sea emerged, an album of unique and rare beauty, full of pathos and love. Understandable as that first retreat from the spotlight was, this second absence from public life signified a different way of doing things for this singular, mercurial talent.

For Bailey Rae is a woman apart, a singer-songwriter not afraid to travel to the beat of a different drum, and always ready to disregard the expected cycles of album-promotion-tour. So for her remarkable third album, it was both music and real life that kept her apart, delving deep into the emotional world that surges though these songs like electricity.

The Heart Speaks In Whispers began life in Leeds, with the creation of her new studio. "I wanted to have my own space where I could explore, create and experiment without the clock ticking or the feeling of anyone monitoring me. Every single song came instinctively with a musical phrase or an image, a fragment that I had to follow to see where it led." Bailey Rae built the studio in partnership with Steve Brown, co-producer of The Sea and musical director of her live band. Friends and creative collaborators since 1997, the pair married in 2013.

Liberated and energised, Bailey Rae let her songwriting ideas grow with giddy delight and exuberant ambition. 'The Skies Will Break' opens the album with a mix of piano and pounding beats. "I wanted it to keep getting more and more intense," she smiles. The elegantly powerful 'Stop Where You Are' is a soaring, "song from the heart, part-ballad and part-anthem" whereas 'Night', one of the first songs she wrote, is the spine-tingling coda to the album. It's a closely mic'd lullaby that showcases her beautiful way with an acoustic guitar and the classic-soul textures of her voice featuring layer upon layer of vocals recorded in the middle of the night.

After writing and recording, laying down a huge collection of ideas in Leeds, Bailey Rae relocated to Los Angeles – specifically, the famous studios in the hallowed Capitol Records building.

"You've got Nat King Cole's piano, and Frank Sinatra's microphones," she marvels. "Everything in the room sounded amazing. You'd play 'G' and think, 'this chord is amazing, I'm gonna write a song just with that chord!'"

The atmosphere of heritage and mystery inspired and emboldened Bailey Rae – and led to further inspirational hook-ups. In a mark of the young Englishwoman's standing and kudos, a handful of legendary players agreed to perform on her new songs. James Gadson, who's drummed with Bill Withers and Marvin Gaye, and storied bass player Pino Palladino (most recently a member of D'Angelo's band), play on 'Hey, I Won't Break Your Heart', a drifting, skeletal soul testimonial.

Gadson also appears on 'Do You Ever Think Of Me', a song co-written with Valerie Simpson, of Ashford & Simpson fame – another new musical connection. "I asked her for help to finish a song that was inspired by 'The Makings Of You' by Curtis Mayfield. A month later I got an email from her, with the subject line 'dibbles and dabbles'. And when I played the attachment she was singing this incredible interpretation of the song. She was playing these deep chords on piano and her voice broke into this beautiful, open anguish. Her contribution is just so overwhelming."

One of the album's central tracks features cult folk-soul singer Moses Sumney (best known for collaborating with Beck) who added his "incredible, crying voice" to the quite beautiful 'Caramel'. Bailey Rae also collaborated with Paris Strother of lauded L.A. band KING (managed at one point by Prince himself!) who have, in her opinion "reinvented soulful music. Their music is just so pure and beautiful."

But serious in a thrilling, utterly unique way. Adding to the wonderland of ideas that make up The Heart Speaks In Whispers are further highlights such as the future-funk of 'Been To The Moon' and the Earth, Wind & Fire-esque 'Green Aphrodisiac'. Both tracks, along with the dreamy R&B of 'Horse Print Dress', were co-written with Paris Strother from the future-soul band King who Corinne was introduced to by her friend Esperanza Spalding. And bringing the elements full circle, Esperanza added her backing vocals to 'Green Aphrodisiac', which also features legendary bassist Marcus Miller who has worked with the likes of Miles Davis and Herbie Hancock. These are songs pushing into new territory, expanding Corinne's palette of sounds ever further.

As the always-imaginative, ever-engaged Bailey Rae puts it, she wants these songs to take listeners on a journey, one where "you've been through the storm, but are reborn, you've seen tragedy, it's there out of the corner of your eye, but you are transformed and feel even more alive."