The Bachelor 2020 Premiere Recap: Will Hannah Brown Join the Show?

The tagline for Peter Weber's season of The Bachelor is "Expect Turbulence," and man, they aren't kidding. Peter's journey began tonight in typical fashion—meeting the 30 women who are hoping to be his forever love, and handing out his First Impression Rose, etc.—but the show went even further this year, giving us the first group date AND one-on-one date of the season. But one of the most exciting moments was the explosive sneak peek of what looks like the Season 24 finale that kicked off the episode. As you might imagine, there are SPOILERS BELOW! You can watch the full episode of The Bachelor season 24 premiere right here on ABC.com or in the ABC app, or read on for highlights and spoilers to find out what happened when Hannah Brown showed up not once, but TWICE during Peter's premiere.

We won't keep you in any more suspense than this sneak peek will, which unfortunately means you will still be at max suspense levels because holy crap official finale spoilers already??!?!?!!? Here's the clip:

So no matter what happens this season, the only thing we're going to know for sure is that everything we know could change after this bombshell drops. (If anyone has a line on time travel technology, hit me up as soon as possible.)

Meeting the Ladies: The Limo Arrivals

As always, we met a few of the ladies in their hometowns so we could get to know them a little better in their own environments: For instance, Alexa owns her own business and proudly exclaims that she waxes vaginas for a living. Hannah Ann is a model from Knoxville, but she says she's just a regular girl. Tammy flips houses—and also people, as a wrestler. But the most interesting tidbit comes from Kelley, an attorney from Chicago—she's already met Peter. The two of them bumped into each other at a hotel over the winter, where they were both coincidentally attending different events, so it'll be interesting to see if her headstart helps her make an early splash.

The limo arrivals hit just about every note possible. There are some cute moments, like Alayah bringing a letter that her grandmother wrote for Peter. Some ladies opt for silly entrances in hopes of making their mark, like Deandra arriving dressed up as a windmill (come on, you knew someone was going to do that). And some women go for the crazy—like Kiarra arriving packed into luggage. Not like special, human-sized luggage. Just a regular ol' bag. If Peter likes flexible ladies, Kiarra clearly has the lead. Jenna made a bold entrance, bringing a friend along with her—Ashley P. Jenna may have been overshadowed in the house by Ashley, who got a lot of buzz among the ladies, although some of the women immediately pegged her as a small horse or a pony, which is terribly rude. Like, she's obviously a cow. No shade...she's literally a cow: 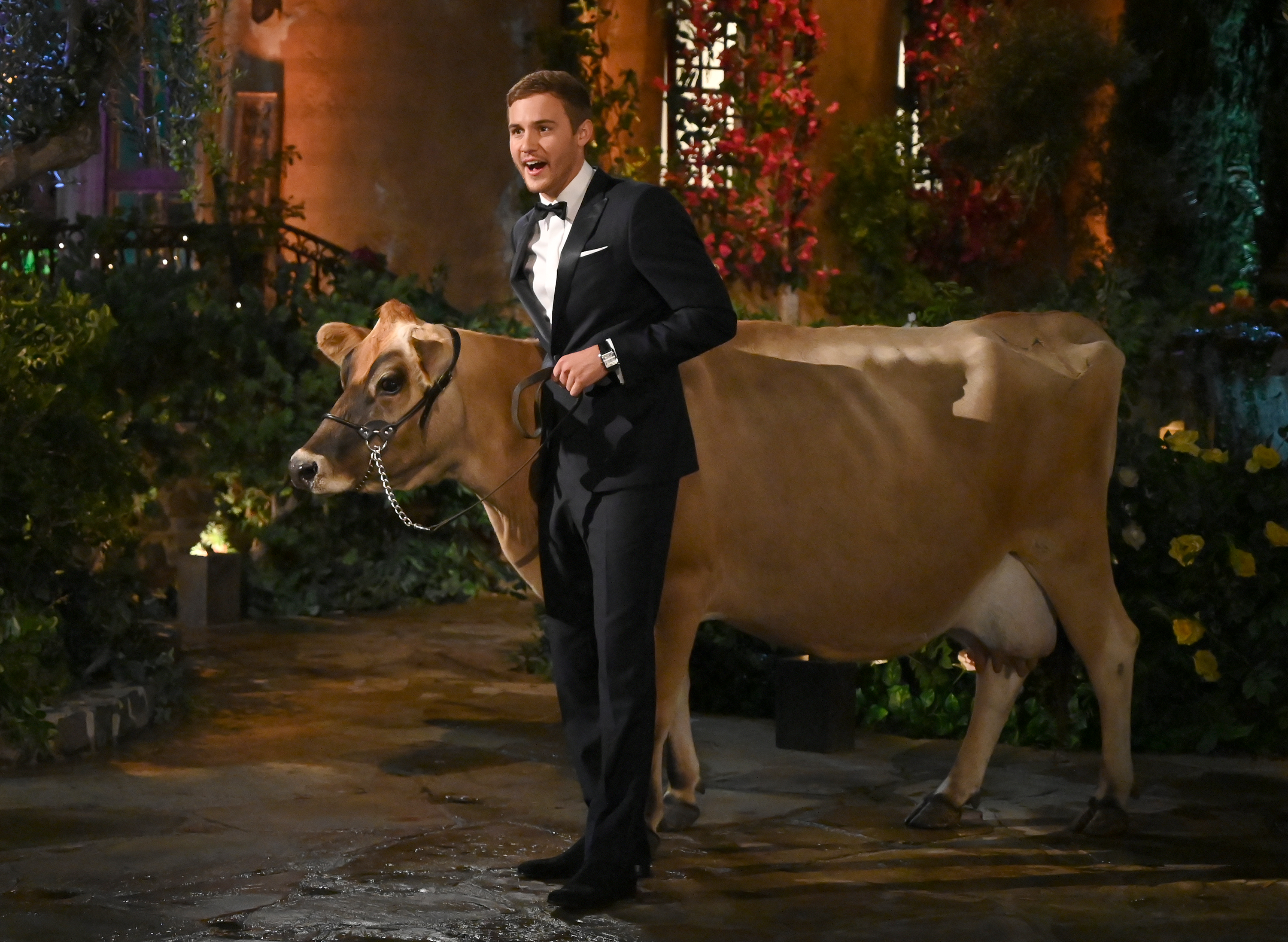 A photo of the lovely Ashley P., with whom Peter immediately fell in love

But the craziest limo exit of the night is someone with whom we're already familiar—Hannah Brown:

WATCH: Hannah Brown arrives in a limo on The Bachelor 2020 premiere

Elsewhere, Mykenna steals Peter from Natasha, who gets upset and throws a giant paper plane at them. But the biggest beef of the "Can I steal Peter for a second?" portion of Night One is reserved for Hannah Ann, who steals Peter multiple times en route to chatting him up three times before some women have even talked to him once. Shiann was one victim of Hannah Ann's thievery spree, and she pulls Hannah Ann aside to discuss it:

WATCH: Shiann Confronts Hannah Ann Over Stealing Peter Too Much

But Hannah Ann's boldness seems to have paid off, as she ends up getting the First Impression Rose:

The other ladies are not pleased.

Who Went Home on The Bachelor 2020 Premiere?

As the night goes on, the pressure ratchets up, and some of the ladies—Mykenna and Victoria F. among them—are driven to tears as they fear going home before Peter really gets to know them. But there's not much time for tears, as soon it's time for the Rose Ceremony. Nerve-wracked Victoria F. gets no help from Peter, as he makes her wait until the very last rose to call her name. But that beats being sent home, a fate which Avonlea, Eunice, Jade, Jenna, Katrina, Kylie, Maurissa and Megan must endure.

Usually The Bachelor premiere ends after the first Rose Ceremony, and we have to wait until Week 2 to start seeing dates and connections start to form, but there's so much drama to pack into this season that we had to get this train moving, so Peter got his first set of dates in this week as well.

During the first group date, the ladies go to flight school, and first up is the mathematics portion of the day, which doesn't go well for most of them:

There's also a physical component, which involves strapping the ladies into an orbitron to test their ability to not barf while being spun in every direction. Victoria P. had a traumatic experience on a spinning teacup ride as a child, so she freaks out a little bit, but manages to spin without throwing up on everyone. She throws up in the bathroom after the fact, like a proper lady. Kelley wins the obstacle course, which secures her a private sunset flight with Peter—though some of the ladies call out the fact that Kelley cheated on the course. Kelley maintains that it was an accident, but the other ladies aren't so sure, putting a new target on Kelley's back, especially as she nabs the date rose that evening.

Peter has a one-on-one date with Madison, and it gets personal fast, as they head to Peter's parents' house to watch his parents renew their vows. Madison does well under the pressure of suddenly meeting Peter's entire family with zero notice, and gets a leg up on the other ladies by getting so much time with Peter early on in the season. They were even treated to a private concert with country sensation Tenille Arts. By the way, we're happy to treat YOU to the full performance of "Somebody Like That," which didn't air in the show. (We have connections, it's NBD.)

Tenille Arts performs "Somebody Like That" on The Bachelor 2020

But the second group date is where everything changes. Hannah Brown returns once again to host a night where the ladies must speak about their sexuality in front of a large group of people, which is already pretty awkward given Hannah's history with Peter (*cough* and the windmill *cough*).

The real surprise is when Hannah is the one who's suddenly overcome with emotions. She has a tearful heart-to-heart with the producers where she begins to wonder if she and Peter have really seen the end of their love story. When Peter finds them, things get serious fast as the two talk about their history—and more importantly, their future:

What comes next? Will Hannah join the show? Will Peter quit the show? You'll only find out if you watch next week! Here's a sneak peek to give you a little hint: