The Bachelorette 2019 Recap, Week 10: Hannah and Luke's Blow-Out Over Sex and "Purity"

Well, Bachelorette fans, the moment you've been waiting for has finally arrived. First we were teased with what looked like a big blowout over sex and marriage. Then we learned that Luke P. was involved. And THEN it sure looked like Bachelorette Hannah Brown sent him home as a result. So is that how it all went down? After many, many, many close calls, did Hannah finally reach her breaking point with Luke? Not to mention we had crazily important Fantasy Suites with Jed, Peter, and Tyler. It's all below, folks. You can bask in the full glory of this episode by streaming The Bachelorette 2019 Week 10 here on ABC.com or in the ABC app, or continue reading this Bachelorette recap for this week's highlights!

The festivities have now moved to the Greek island of Crete, and at this point, Peter steering clear of drama is pretty much guaranteed. But could that mean that he's not sparking enough interest with Hannah to stir things up?

Peter's biggest issue for Hannah is that she really wants him to tell her how he feels. While frolicking on a boat in the Aegean Sea during their daylong date, Peter asks Hannah "Do you know how much I like you?" It's sweet in the moment, but Hannah later points out that at this point we're talking about marriage in a week. She needs to hear the world "love," and she has three other guys on the line who have already said it. At dinner that night, Peter dances around it, recalling a lot of moments they've shared together that were poignant—presumably because they were moments where he knew he was falling in love with Hannah, moments where he wanted to say it. But he still doesn't.

Instead, he tells a story, pauses, falls silent. Over and over again. He talks about his nerves when it comes to relationships. Then he tells her all the wonderful things that he loves about her, and the way she makes him feel. And just before all of us watching at home broke the spacetime continuum for the sole purpose of reaching into our screens to slap Peter's face and tell him to JUST SAY IT ALREADY, he says it:

We're not even trying to marry Peter and it was cathartic for us, so just imagine how great that felt to Hannah.

With that in the rear view, the pair opts to stay in the Fantasy Suite, and both were quite pleased with themselves in the morning. Peter is confident that Hannah couldn't possibly be this in love with anyone else.

Next up was Tyler. Right off the bat, these two are just all over each other (which is hardly out of the ordinary). And they easily transition from how hot they are for each other to how both Tyler and Hannah felt that Hannah easily fit in with his family. If you can find someone you're super hot for, and also you love their family, well, that may not be the end-all, be-all of a marriage, but that's a pretty great start. Hannah says multiple times that their physical connection is really, really great, and she says it so many times and so forcefully that you can practically hear her winking as she says it.

And as it turns out, that's also her biggest issue with Tyler: Hannah is afraid that their physical chemistry is overshadowing the rest of their relationship. So she has a proposition for him: Instead of using the Fantasy Suite to max out their physical relationship, what if they expressly forbid physicality in there and use the time to better their emotional connection? This may all be hearsay, but I've heard rumors that 26-year-old guys like sex. Would Tyler be up for it? Let's go to the tapes (for you young'uns out there, we used to watch videos on tapes)(RIP Betamax)(anyway, here's the clip):

Probably the best possible answer to have given right there. When Tyler leaves in the morning, Hannah calls him the most respectful man she's ever been with, and begins to cry—seeing him go is hard for her. That certainly points to a deep connection.

Jed and Hannah spend the day experiencing Greece as the locals do, wandering around town, then having lunch with some strangers, who say these two look like they're in love. But things get dicey when the randos ask if Hannah and Jed are going to get married. Hannah says maybe, but she hasn't decided. Jed gets uncomfortable, and pulls Hannah aside. What's all this about, then?

Ah, that old, familiar tune: It's about Luke.

Jed just straight-up asks: How could someone like you be into someone like him? Here are a few of the faces Hannah makes before responding: 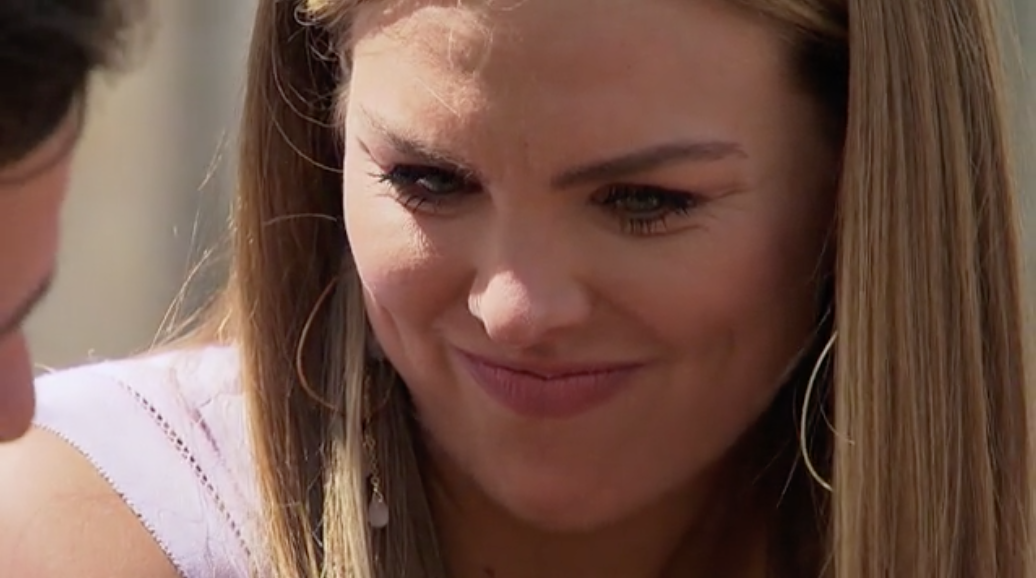 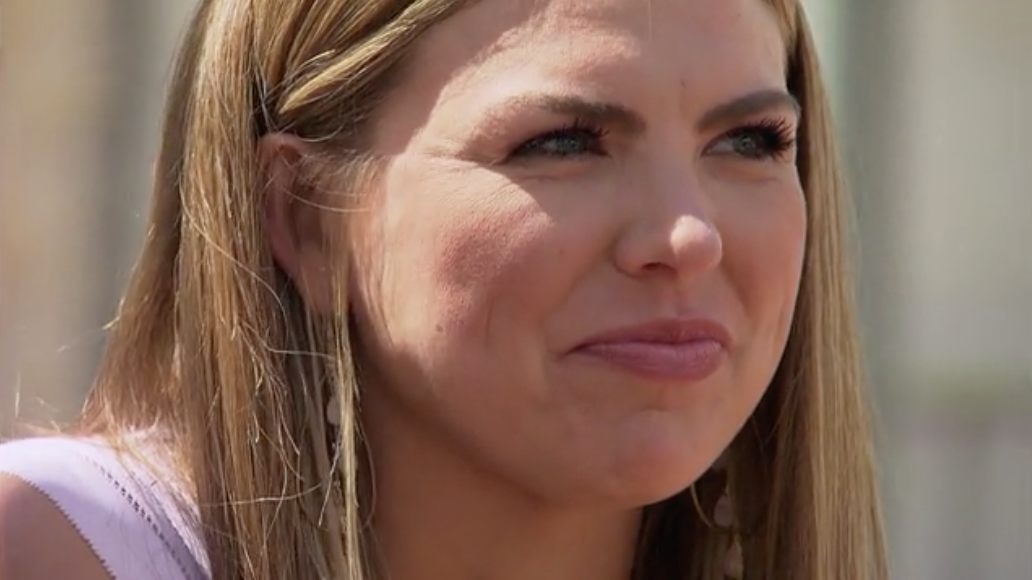 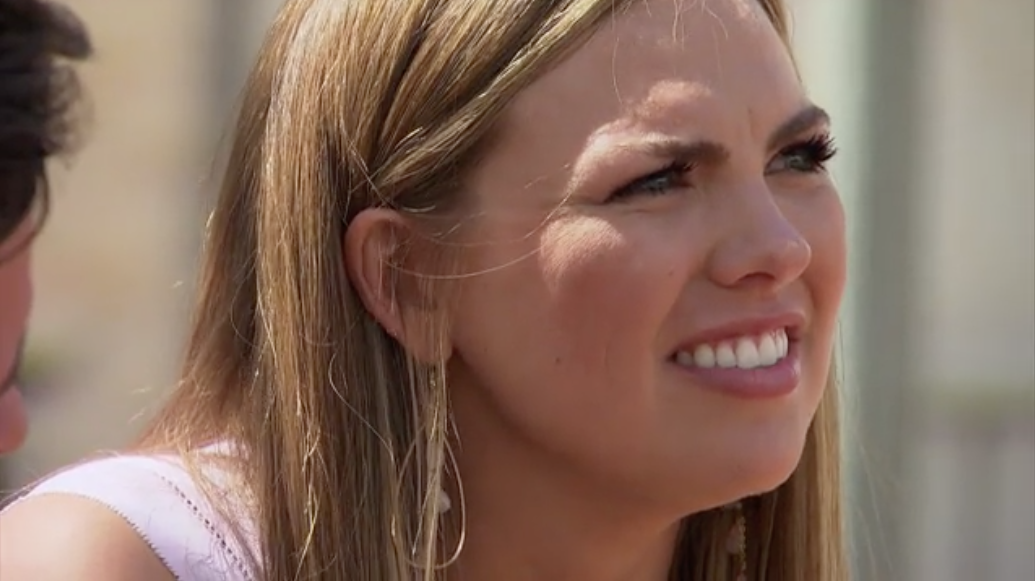 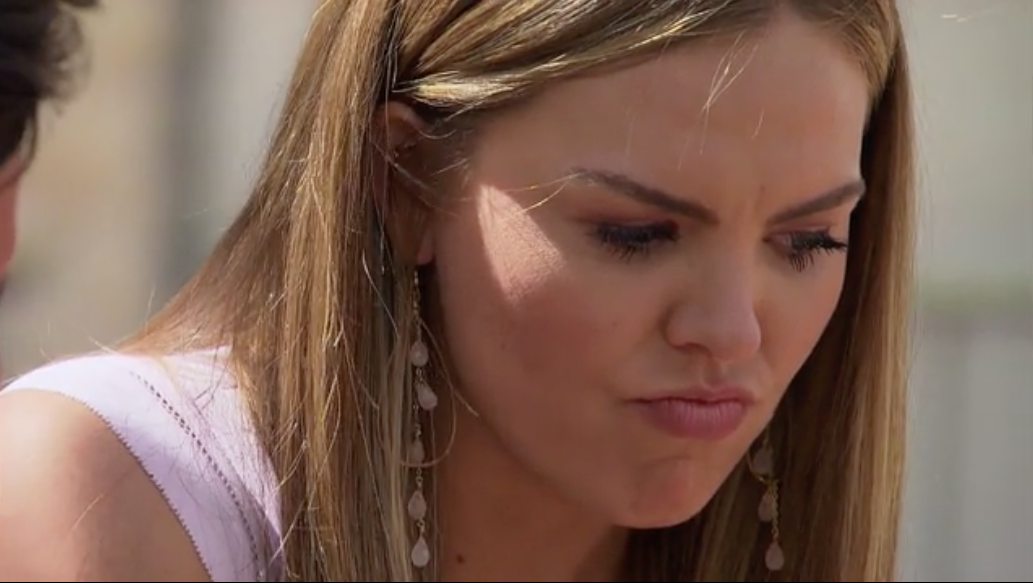 She speaks mainly in broad strokes, possibly in an attempt to spare Jed details such as "Luke P is the best kisser," which is something that we the viewers all know after watching Week 6. But she reiterates that she and Luke have a connection and she believes that he's really here for her.

At dinner, Jed circles back to why he doesn't think Luke should be around, and even more damning, what he fears it may say about Hannah:

Hannah is not happy. She's frustrated that she has to deal with Luke-related drama from the other guys every single week. Hannah feels like it comes down to trust in their relationship, and Jed needs to trust that she's going to do what's right for her. So, they basically decide that everything's cool and they all understand the situation.

And then in the next breath it's off to the Fantasy Suite, so yeah, I guess it all worked out.

Luke and Hannah. Fantasy Suites. Sex. Drama. Anger. We've been getting little hints from this conversation over the course of the season, but now it's here. Ladies and gents, this is what you came for. Welcome.

Hannah's day with Luke P. starts off just fine, with the two helicoptering off to the Greek island of Santorini. Luke is excited; so is Hannah. In fact, Hannah is very excited:

But things go south VERY QUICKLY during dinner. If we had to pinpoint the moment that the mood changed, our best guess would be the point where Luke says, "So let's talk about sex." Basically EVERYTHING that happens after that point goes very, very wrong for Mr. P.

First he insists that "the marriage bed should be kept pure," and that sex is only meant to be enjoyed within the confines of marriage. Then he says that if it turns out Hannah has had sex with one or more of the other guys, he would like to go home:

Hannah very quickly makes it clear that she doesn't agree with a lot of what Luke has to say on this subject. She doesn't feel like he has the right to judge her or her decisions in this realm. Luke starts to walk it back, saying that he would only want to go home if she had sex with ALL of the other guys. Hannah doesn't let up, saying that's not okay, and it's not really any of Luke's business at all at this point. He keeps trying to interject, but she shuts him down at every turn, reiterating that it's not okay. "You don't own me," she says. "You don't get to decide what I can and can't do." The more she talks, the more upset with him she gets. It's kinda like every word out of her mouth has her saying "Yeah, you're right, Hannah!" and every bit of confidence she gains fuels her.

Basically, Luke has unleashed Hannah Beast. And it would appear Hannah Beast is not in the mood to be patronized.

Soon, Hannah says that she's had enough of all this. Luke has already broken her heart on this journey. She's screamed and she's cried and she's prayed for this to work itself out, and in a sense, it has. She finally has the clarity she's been after when it comes to Luke, and she says that she now knows that she does not want Luke to be her husband.

Luke doesn't want to go. (As is tradition.) And he asks Hannah for the chance to speak. But Hannah has said her piece, and she's ready for him to leave. No more talking.

But, but, but: Luke gets a few things out, including the fact that he feels like Hannah "owes" him the chance to speak.

And that...was probably not the right way to put that:

In the end, only Hannah knows how she really feels about Luke. If her farewell is an accurate summation of said feelings, it's probably best that Luke's headed home:

So that's it, right? That's the second time Hannah has sent Luke home, so that's gotta be it for him. Here's a look at what's coming up next week which definitely doesn't include Luke because he just got sent home WAIT WHAT THE HECK IS THIS WHY IS LUKE IN THAT VAN WHAT'S GOING ON OMG:

Are you curious to see what Hannah Beast has to say about this? Us too...so don't miss The Bachelorette MONDAYS 8|7c on ABC!