The Bachelorette 2019 Recap, Week 9: Who Went Home After Hometowns?

As any fan of The Bachelorette knows, Hometown Dates are where things start getting really serious. It's easy to have a fun, carefree time while you're jetting around Europe, but things get a lot more real when your potential mother-in-law is staring deep into the recesses of your soul, asking about your intentions with their child with primal Mother Bear instincts seething just behind that quiet smile. Meeting the families is a huge part of any relationship, and Bachelorette Hannah Brown did it four times on Monday night. Did this bring her the clarity she sought on the four remaining men—Jed, Luke P., Peter, and Tyler? You can stream The Bachelorette 2019 Week 9 here on ABC.com or in the ABC app, or just continue reading this Bachelorette recap for this week's highlights!

Hannah's date with Peter starts off on a high—literally, as he takes her flying in a small plane over Southern California. They fly over the Bachelor Mansion, as well as his house (which has a pool, if you're keeping score). When they meet the family, it's a little challenging. Peter's mom says she's scared for him because she knows Hannah's dating three other men. Peter's dad boards the Concern Train as well, breaking down because he's worried about his son being in such an unorthodox situation. The date ends on a bit of a murky note, as Peter is afraid to say "I love you" to Hannah. He's been hurt in the past and he can't get over that hurdle. Hannah says she's not sure where Peter is with his feelings—will that hurt him in the Rose Ceremony?

Peter's date had the air; Tyler's date has the sea, as he and Hannah kick off the day with a boat cruise and some swimmin' and chillin' around Jupiter, FL. Tyler is really excited to have Hannah meet his family, but he's also worried about his dad, who's had some health issues over the past year…so he feels like it's gonna be emotional seeing them after an absence. And right on cue: Tyler and his dad are both emotional upon arrival. It's adorable. And when the two get some time alone, it's pretty much the same:

When Hannah talks to Tyler's brothers she gets the same story: He's wonderful, he's truly kind, and he's done so much for the family, especially while his dad has been sidelined with illness. So basically, he's the guy Hannah thinks he is. The question is, Is that the guy Hannah wants to marry?

Hannah feels like she really needs this date to get to the bottom of Luke and who he really is. She's had a rough road with him, and she needs to see if that's a pattern with him or not. They kick off the date in Georgia with a trip to the bible study where Luke spends a lot of his time. They talk about identity and external pressures, and Hannah opens up about her struggles with that as well. Hannah feels like the whole thing gave her a different perspective on Luke, and she's happy with what she sees. When it's time to meet the family, Hannah just lays it all out there, even telling them that it was Luke against the rest of the house. To a man, his family is shocked to hear it, which helps put Hannah at ease—maybe the guys are wrong about him.

Luke tells Hannah that he loves her and that he sees her as his future wife. Later, Hannah says "I have fallen in love with—I am falling in love with him." It's a tiny rephrasing there, but not an insignificant one at this stage in the game. Is Hannah still on the fence here?

Jed's date, of course, features some singing: He and Hannah meet up in Nashville and write a song together, then record it in a studio:

During family time, Jed's sister Lily expresses some concern about Jed getting hurt in this process, and Jed's mom is definitely a bit cynical about it as well. Jed tells his family that he knows he loves Hannah and wants to spend the rest of his life with her. But none of that stops his mom from telling Hannah that Jed's career is very important to him, sort of insinuating that music is his real focus—not Hannah. Hannah says the convo sets off alarms in her head. And after the night ends, she's clearly having a rough time processing the idea that Jed might not be ready. It's the only hometown that ends with tears for Hannah.

So after meeting all the families, Hannah had to decide which heart to break. Peter got the first rose, then Tyler received the second, leaving one rose up for grabs.

Jed or Luke P.? Who would receive Hannah's final rose? Even Hannah looked like she didn't know. And then it became clear...she really didn't.

Suddenly, Hannah just kinda wandered off, leaving the guys very confused. Peter and Tyler had a little support group for Jed, leaving Luke all alone, as shown in this super professionally created graphic below that I definitely did not just make in like one minute: 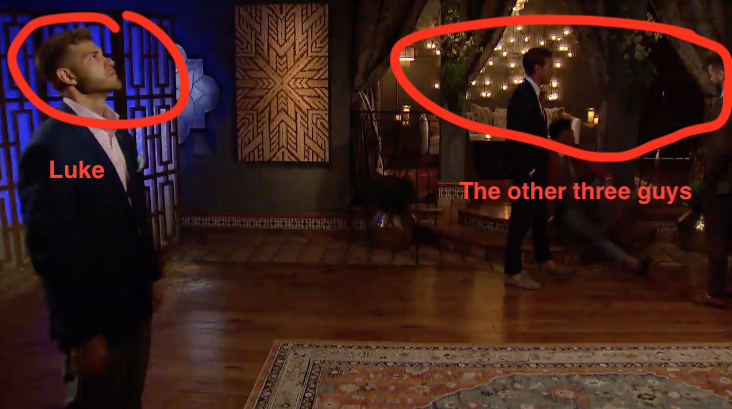 Jed was obviously sweating it, but Peter assured him "There's no way she doesn't see what we see with [you]," which 1) underscores how close these guys have become on the show, 2) makes me wonder if those guys are also contemplating marrying Jed, and 3) really makes it clear these guys still don't like Luke P.

Chris Harrison grabbed Hannah when she wandered away to make sure she was okay. It was clear she just couldn't decide. She wasn't ready to send Jed or Luke home yet. She needed more time.

When Hannah came back out to greet the men, Chris followed close behind...and gave her another rose to hand out. No one's going home. Relief!

Not that Jed was happy about it. He said he got a rose, but it sure didn't feel like it—by which he meant that Hannah was lumping him together with Luke, whom Jed called a "scumbag" shortly after the ceremony:

So that should make for an interesting four-pack of Fantasy Suite dates, a preview of which you can see right here: