On the Wednesday March 23rd, 2016 episode of "The View" Terry Bollea, former professional wrestler Hulk Hogan, spoke to the co-hosts in his first in-studio interview since winning a 140 million dollar Gawker settlement. He sued Gawker after they posted video from a sex tape in which Terry was having intercourse with Heather Clem, the wife of his friend Bubba "The Love Sponge" Clem. Terry explains he got emotional after the decision because it showed people finally believed him when he said he was not behind the taping and release of the sex tape. He did not care about money, he cared about being believed. He is also happy with the settlement as he hopes this stops something like this from happening to anyone else.

Terry, along with lawyer David Houston, explains how a sex tape of him was made and released without his knowledge. Terry also admits he may not get the full $140 million dollars. He feels Gawker is the ultimate bully for posting this tape and that it's devastating to have your privacy violated in this manner. This trial was about stopping Gawker from doing this to other people.

The Gawker defense lawyer says the case is being appealed as they feel it was their first amendment right to post this sex tape as it was newsworthy. David insists what Gawker did was a crime. Terry also talks about the racist comments he made in the tape; he used the n-word and called himself a racist. He says his actions were just stupid. He was upset with his daughter's ex-boyfriend, who is black, when he made those statements. He got strength from his children, Nick and Brooke, to put up with this trial after he told them about the release of the tape. He doesn’t know if he could have made it without their support.

Watch the full episode of the Wednesday March 23rd, 2016 show to see all of this exclusive interview.

Nick Denton, Founder of Gawker Media, discussed the Hulk Hogan lawsuit on the Thursday March 24th, 2016 show. Nick believes the story was newsworthy because Terry Bollea is not a normal person. He is a character, Hulk Hogan, almost all of the time. He felt this type of character sleeping with his best friend’s wife was a newsworthy story.

Nick admits there is sensitivity around sex tapes today and many are not published as they are not news. The difference with Hulk Hogan, that made this particular story noteworthy, was Hulk Hogan was a big celebrity and he was talking about the tape.

"The View" Co-hosts Ask Gawker Media Founder "Where Do You Cross the Line?"

Nick Denton feels the Hulk Hogan sex tape was fair game as he was a celebrity that publicly made his sex life so much a part of his character. He feels celebrities need to exercise some sort of responsibility. He compares Hulk Hogan to Matt Damon saying you don’t know a lot about Matt Damon because he does not offer that information to be written about. “The View” co-hosts asks if this is victim blaming? Nick’s response is, if a celebrity starts the conversation others are free to join in. These stories are not to everyone's taste, maybe not even to his, that does not mean they are not newsworthy. Co-host Whoopi Goldberg feels there is no way to justify publishing the tape. 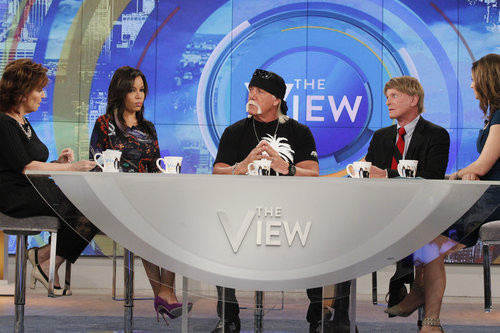