When we left off last night on Bachelor In Paradise, Dylan was hurting after realizing that Blake was making his move on Hannah, and Hannah wasn't going to stop him. Dylan feels like there must be more to the story, and it turns out he was right. And though we the audience knew about Demi's fluid sexuality, the rest of Paradise did not—but that all changes now. If you still need to catch up, you can watch Bachelor In Paradise Week 2, Part 1 and/or Bachelor In Paradise Week 2, Part 2 right here on ABC.com or in the ABC app. If you want to catch up fast, you can read last night's recap here, and then read on for the most recent highlights! 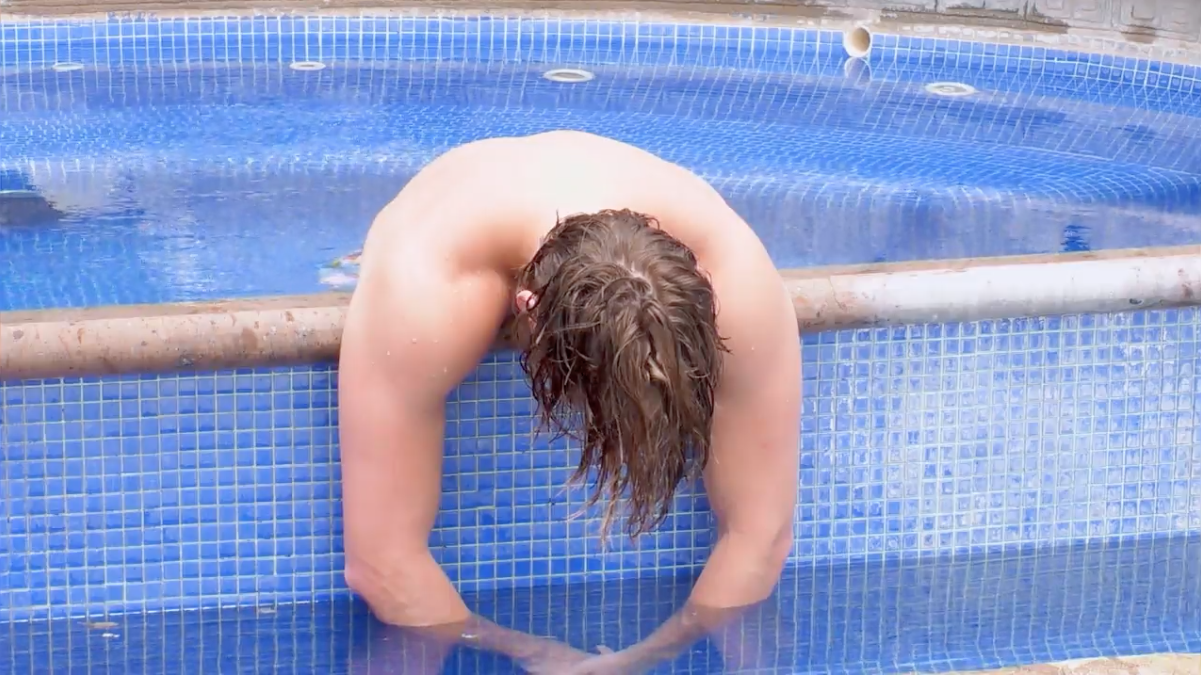 We just figured you'd enjoy that.

Demi mentioned her fluid sexuality back when we first met her on her way to Paradise, but she hasn't been sharing that on the beach. But as her feelings for Derek have grown, so have her feelings for the woman she was dating back home. Demi can't help but think about her—something that obviously affects her relationship here in Paradise. She needs to talk to someone to help sort out her feelings, and that means being honest about who she is and what she wants. She grabs Katie to start the process, and has a very emotional and beautiful conversation about living her truth:

Demi still has to have this conversation with Derek, but now she's a little bit less nervous about how that'll go.

The ladies haven't let up on Blake, but they're also starting to feel that Hannah is just as much at fault for all this drama and love triangle. Dylan himself needs more clarity, since he didn't get any during his confrontation with Blake and Hannah last night.

So Dylan grabs Hannah and asks: Everyone thinks Blake is toying with everyone—why are you into this dude who's mistreating everyone? Dylan says he must be missing something. It turns out he is: Hannah reveals that Blake flew out to Alabama to visit Hannah before they came on Paradise. Dylan isn't happy, because now he feels like HE is the interloper, and that's why she can't let Blake go.

That info circulates through paradise, and everyone's surprised. Tayshia confronts Hannah about it, telling her she feels like Hannah should have told her that before she went on the date with Blake in Week 1. Tayshia thinks Hannah is playing innocent but is playing just as much as Blake. Hannah feels attacked and says that Tayshia "mean girl-ed" her.

Dean Is Clearly a Witch

Dean rolls into Paradise with a new mustache: 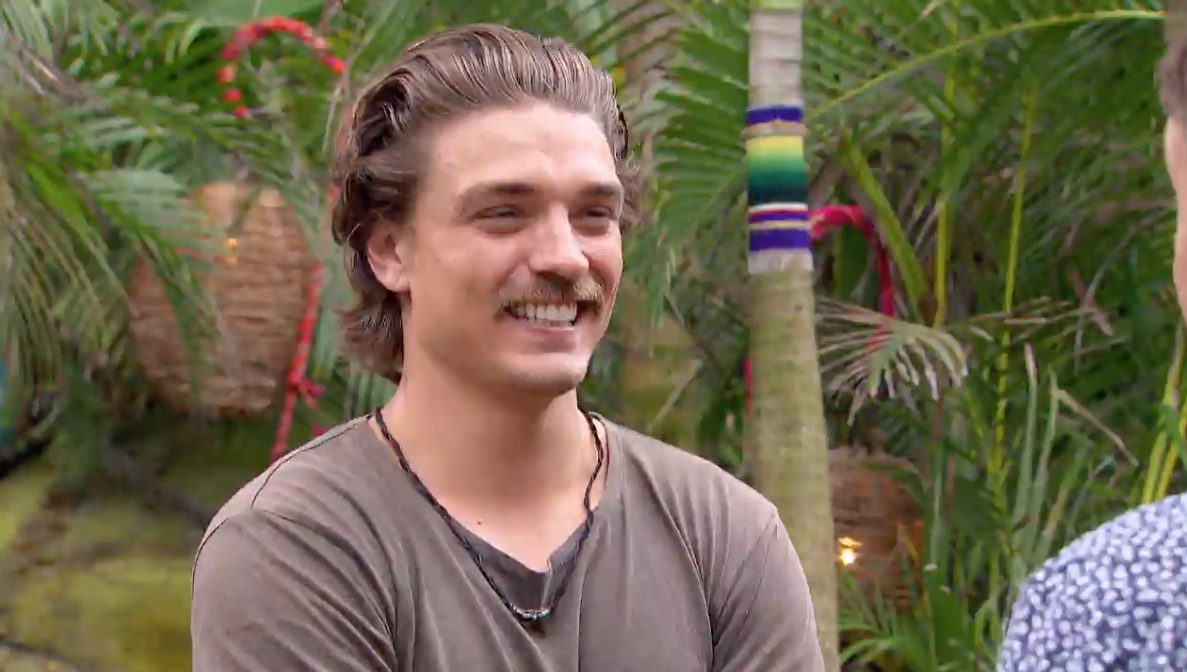 Then he goes on to explain that he's a vagabond these days. No job, living out of his van—but hey, he has access to running water for a toilet and sink, so queue up in an orderly fashion, ladies.

AND THEY DO. ALMOST ALL OF THEM. In 99.9999% of these situations, Dean's set of circumstances is an instant "No thank you," but instead, Dean has a line of suitors a mile long.

Hence: witch. It's the only possible explanation.

Dean asks Caelynn on a date, and she says yes, ostensibly because of the hex he has put on her with his flowing locks, bountiful confidence, and charm, sealed by his magnificent crystal blue eyes, and...oh. We get it now. Anyway, they have a great time on the date, and in case you're wondering what has become of Dean's Paradise baggage—his infamous love triangle with Kristina and DLo—he tells Caelynn he's reflected on that, and he's changed a lot since then and that he's ashamed of his behavior there. Caelynn is instantly very, very into him, and probably not only because he showers in nearby lakes and streams.

One person who is not into Dean is Cam, who once again, must watch Caelynn waltz away on a date with a new dude. He's sad sack-ing it pretty hard around the beach, and everyone has noticed.

Demi and Jordan have definitely noticed, and comment on Cam's new hangdog demeanor—and throw a ton of shade all over the beach in general—in this delightful moment that we simply cannot get enough of and hope will be replicated every episode:

All of the ladies take notice of new arrival Christian, who rolls into Paradise with a lot of swagger. He says he's not here to waste any time and he's not here to make any friends. Well, he's here to make ONE friend, which will hopefully be romantic, but other than that—no friends. Jordan is probably fine with that:

Christian immediately feels some heat with Nicole, and doesn't even care about who's been dating who and all that garbage. He likes Nicole, he asks out Nicole. This is Nicole's third 1-on-1 date in Paradise, which we think makes her the Official Queen of Paradise, which unfortunately is an unofficial title. And boy, do they have chemistry. It's all smirks and sideways glances and smooches on their date. When they get back to the beach, Christian is flexing on the other guys about how great their date was, and Nicole is beaming to the ladies. Nicole still likes Clay, but fears that he's a little too passive. She likes that Christian takes charge and wishes Clay did more of that.

Elsewhere On the Beach...

Demi is ready to have her conversation with Derek about her sexuality and their relationship. Here it is:

She says it "could not have gone better," and we could not be happier.

Also, it turns out that JPJ has been into Tayshia, and he decides that he'll recite a bit of Shakespeare to her as his opener. His dedication to The Bard pays off, as this young Romeo secures his first kiss from Tayshia, kicking off what could be a new romantic couple in Paradise:

Clay, Christian, Jordan, and the Piñata that Brought Them Together and Tore them Apart

Later in the evening, Christian wants to talk to Nicole while Clay is talking to her. Christian won't take no for an answer—he says his date with her isn't over. He almost gets into it with Clay, who isn't backing down either, probably because he's trying to be more assertive per Nicole's request. Christian eventually pushes Nicole to choose, and she says she wants to talk to Clay.

Christian isn't done, however. He sets up a piñata and drinks for Nicole. Clay hates seeing that, and floats the idea of stealing Nicole away, specifically before the piñata gets busted open, as revenge for Christian's previous behavior. Clay goes over to make it happen, but Christian won't allow it, and the two get a little too close in the exchange. It's tense. Eventually Clay walks away, and Jordan is mad. He wants Christian to suffer, and decides to take matters into his own hands.

So Jordan jogs over to Christian's cabana, and begins to take the piñata down. Christian grabs Jordan, and the two start to scuffle. As both go airborne, headed for the sand...

The episode ends. Here's a sneak peek of what's next: