Meredith and Her Sisters
The premiere kicks off a fresh start for Meredith Grey. Everything is different now. She's invited sister-in-law Amelia and half-sister Maggie to move in with her, and they're driving her bonkers. Especially Amelia, who keeps doing Meredith's laundry and putting it away for her. Meredith wants to live with people who know her already! Poor Maggie is caught in the middle.

Meanwhile, Dr. Bailey thought she had the Chief of Surgery job all sewn up. Bailey wasn't pleased when she found out she had to compete with a candidate of Catherine Avery's choosing, and she definitely isn't pleased when she meets her competition. Dr. Tracy McConnell (guest star Joey Lauren Adams) is a talented doctor with an impressive resume. Bailey starts to worry.

She decides to tag along when Dr. Webber gives Dr. McConnell a tour of the hospital. McConnell rattles off more of her accomplishments, and then impresses everyone when she steps in and talks Meredith through a life-saving procedure on a crashing patient from the viewing gallery of the OR.

Bailey is so discouraged that she gives up, and decides to skip her presentation to the board. But Ben stops her, and convinces her to fight for the job. Bailey realizes he's right. She calls the members of the board into the OR, and gives an impassioned speech about why she deserves the Chief of Surgery position, while performing an operation. Her argument is so good, even Catherine Avery is convinced! Bailey gets the job.

Callie Just Says No to Bullies

Two teenage girls are rushed into the ER after being hit by a commuter train. Jessica and Aliyah love each other, but Jessica's parents were going to send her away to a special camp. The girls thought standing in front of the train was the only way they could be together forever. Their tragic story brings memories of being bullied to the minds of all the doctors who are treating them. When Callie tells Karev and Maggie that she learned to fight to prevent anyone from bullying her, Maggie tells them she didn't have that luxury. As a small and vulnerable child, she was tormented by the other kids, who called her "Maggot," made fun of her lisp, and pantsed her in the quad.

Later, Jessica's bigoted mother is yelling at Callie for calling social services on her. When she gets in Maggie's face too, Maggie hauls off and punches her! Oops. Maggie can stand up for herself now, but she didn't mean to punch the awful woman. Now she has to apologize! Luckily, the situation spurs Jessica's dad to stand up to his wife. He loves and accepts Jessica. It turns out Aliyah's dad feels the same way about his daughter. Everything is going to work out for the girls after all.

Nobody Wants to Live with Arizona

Arizona is looking for a new roommate, but no one has called. She asks Stephanie why, but Stephanie doesn't want to talk about it. Finally Arizona wears her down, and Stephanie explains that she's kind of a legend among the interns and residents. They're all a little afraid of the Legend of Arizona.

Stephanie's 7 Reasons Nobody Wants to Live with Arizona:

1. She's survived a plane crash, a car crash, and a shooting. She might be immortal.

2. She mastered one of the most exclusive specialties basically overnight.

3. She took Dr. Herman's job, and her eyesight.

4. She's screwed dozens of interns, and got them all fired.

7. She has two legs, and is only PRETENDING one is amputated -- for the parking space!

But it turns out there is one intern willing to live with Arizona... mostly because nobody likes him. Arizona tells him they can make it work.

In the Season 12 premiere, "Sledgehammer," Arizona (Jessica Capshaw) finds out the hard way that nobody wants to live with her... except maybe the intern (Giacomo Gianniotti) no one else likes. 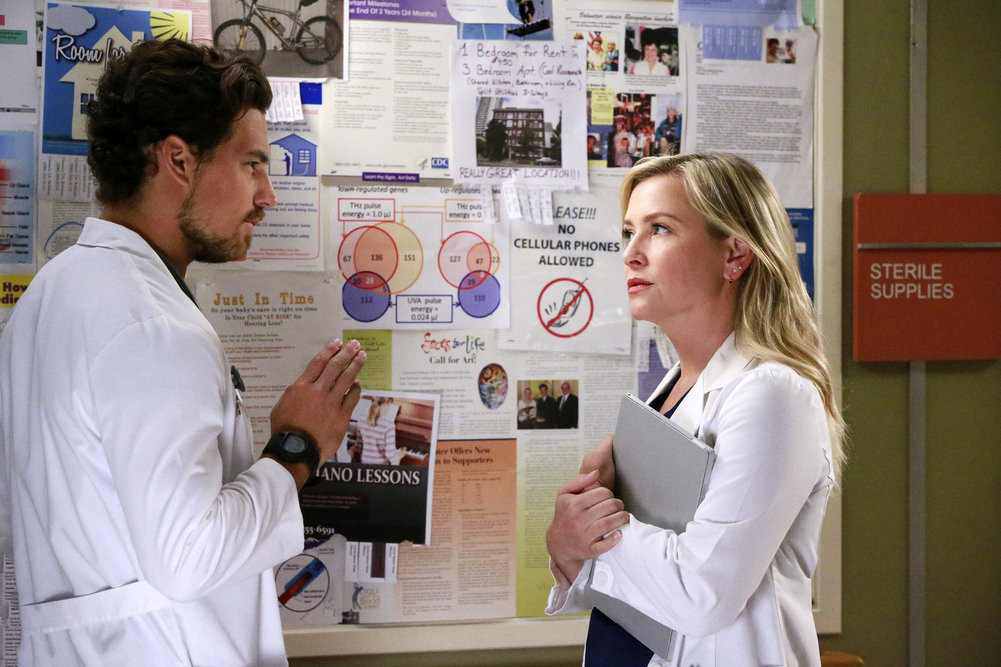 Jackson is grouchy all day, because April is coming back and everyone wants to talk about it. But not Jackson. He sleeps in the on-call room to avoid April, but she walks in, thinking he'd be at home. She wants to talk later, but Jackson doesn't seem interested.

That night, Alex confides in Jo what he didn't tell Maggie and Callie earlier. He too was bullied as a kid, because he was overweight.

And after Meredith abandons Amelia at work, Owen gives her a ride home, and a kiss at the front door! They don't get a chance to discuss that, because Maggie drags Amelia inside. She sits Meredith and Amelia down and tells them to get their crap together. It's a simple plan, but it works. Amelia apologizes for taking a sledgehammer to Meredith's living roon wall without asking, and Meredith apologizes for saying she had fleas. "I don't know how to talk to you. You are a lot... sometimes. I don't totally like you," Meredith tells her. "But I don't have to because you're family, I love you." Then Meredith grabs the sledgehammer and starts swinging at that wall. Everything has changed, and she's finally ready to embrace it.