Harrison Ford Recalls His Plane Crash
Harrison talked about what he does and doesn't remember about his recent plane crash.  Harrison had recently been in a plane crash on March 5th.  His single engined aircraft lost power shortly after take off.  Harrison recalled that the air tower control told him to "take the normal route to land and I knew I wasn't going to do that so I said, 'no.'"

Harrison Ford's Ankle Injury Was Caused by the Millennium Falcon
Harrison talked about getting injured on the set of "Star Wars VII: The Force Awakens".  Jimmy found the police report which was reported that a 71-year old man was injured by a "garage door."  Harrison reports that it was "the door to the Milenium Falcon."

Harrison Ford Talks About Star Wars: The Force Awakens in a Hotdog Costume
Harrison shared his thoughts on "Star Wars:The Force Awakens" and talks about working with directors George Lucas and J.J. Abrams.  Jimmy tries to get Harrison to rank the directors.  Harrison tells Jimmy "I want the audience to experience it, not have me tell it."  Jimmy also asked Harrison why Luke Skywalker is not on the poster.  His explanation was, "there wasn't enough rooom."  Check out the other questions Jimmy asked regarding the upcoming movie. 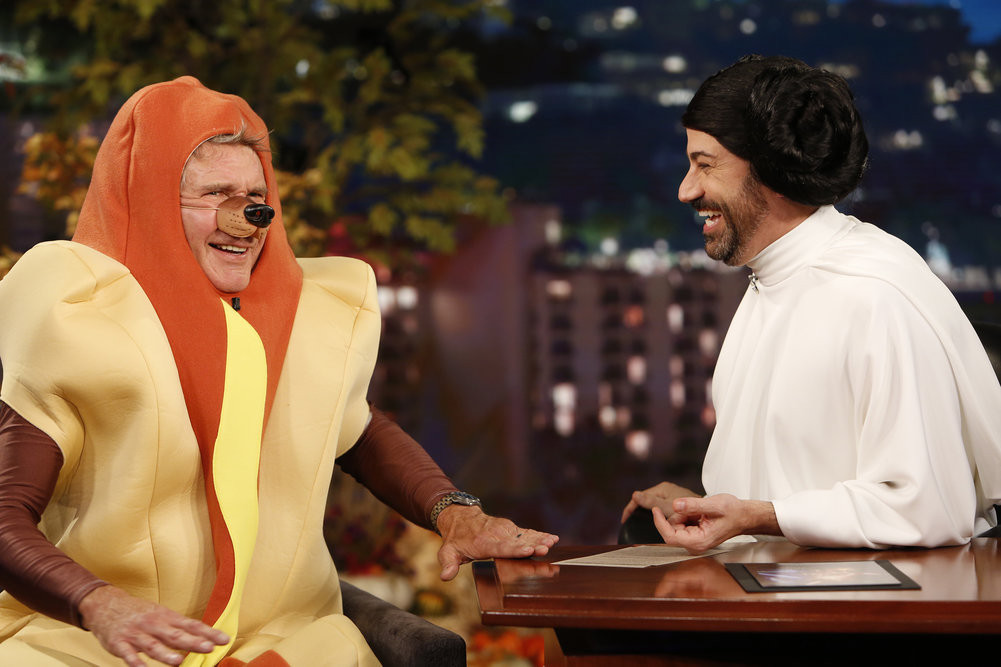 Harrison Ford in his dog in a hot dog costume.

From the October 29th Episode of Jimmy Kimmel Live with guests Harrison Ford and Katie Lowes.