February is Black History Month and Localish has the perfect story to help celebrate. In what may be the most comprehensive collection of African-American history assembled by a single person, Elizabeth Meaders owns over 50,000 artifacts in her New York home. Which of her items does she say can tell the entire history of the Vietnam War? What legendary sports figure actually inspired her to start collecting? What exactly is the Benjamin Butler Award? You'll find out all of this and much more about African-American history when watching this episode of Localish by listening to the words of the Elizabeth Meaders and seeing the items she's collected to tell some of America's most important stories. 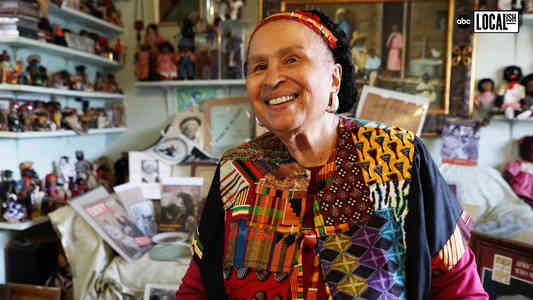 Digital-native lifestyle brand Localish is expanding to broadcast beginning in February, bringing the good in America's cities to television. Wendy McMahon, the president of the ABC Owned Television Stations, announced that Localish will appear on the digital subchannels in New York, Los Angeles, Chicago, Philadelphia, San Francisco, Houston, Raleigh-Durham and Fresno beginning Feb. 17, 2020, a rebranding of the group's Live Well Network. Localish launched in 2018 as a digital-first national lifestyle brand featuring locally sourced yet nationally relevant stories. On television, Localish will expand its short-form series of local storytelling into long-form programming. Here's a look at the 10 series that will initially comprise Localish's programming:

In Localish's first year, ABC's eight owned stations produced over 700 pieces of digital video content that garnered more than 240 million video views. Popular stories included a behind-the-scenes look at a luffa farmer in Central California, a story about community members rallying to support a boy with a rare skin condition and a profile of a Chicago-area woman who started a non-profit salon to help educate transracially adoptive parents in the art of African-American haircare and styling.

With its new presence on broadcast, Localish will continue to debut stories on localish.com, ABC digital platforms and social media platforms as it transcends city limits and inspires its audience to live like a local wherever they are.

"We first launched Localish as a reflection of our deep commitment to the communities we serve." McMahon said in a news release. "The resonance of Localish's storytelling has enabled us to forge connections with a new generation of viewers. We're excited to start this next chapter of the brand and give our viewers even more ways to live like a local."

Jennifer Mitchell, the ABC Owned Television Stations' senior vice president of content development, added: "Over the past 18 months, it's been incredible to see how our communities have embraced this unique style of storytelling that authentically reflects the best parts of America. Our storytellers and content creators have really been able to unlock innovative ways of storytelling, and we're thrilled to share their work with even more people on every platform."

Most recently recognized with the 2019 Innovator Award - the highest distinction among TVNewsCheck's annual Social Media Excellence Awards - Localish was credited for its forward-minded ideas, sleek execution and all-around positive impact.