The entire February 25 episode of Modern Family, "Connection Lost," takes place on Claire's (Julie Bowen) laptop as she desperately tries to track down Haley (Sarah Hyland), who's not answering her phone after a fight. Just about everything that appears on Claire's screen is packed with inside references to other episodes or to people who work on the series. It would be impossible to catch them all in one viewing, so here's our cheat sheet to the top 6 Easter eggs. Try rewatching each clip to see if you can spot the secrets!

2. Alex's Essay
How does Alex (Ariel Winter) know her mom is lying when Claire claims she's read her college entrance essay? Because there's a message in sentence four that would surely have gotten a comment.

3. Claire's Yahoo Home Page
On the Yahoo Home Page, there's an ad for Croctopus 4, a sequel to the "so bad it's good" disaster film that Phil (Ty Burrell) and Claire went to see in the Season 2 Episode "Our Children Ourselves." Croctopus 4 also stars former Wonder Years' Fred Savage, who's directed several episodes. And did you see the news story about Claire's city council nemesis (from Season 3's "Election Day"), the puggle-loving Duane Bailey (David Cross)? 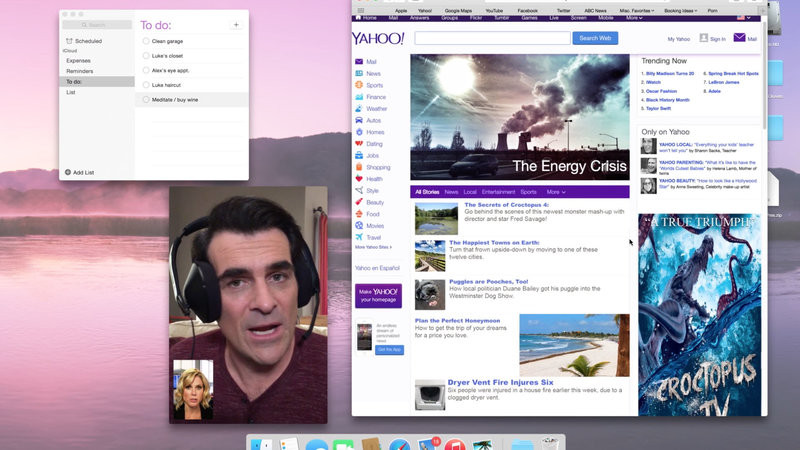 The "Bath Butler" article refers to the occupation of guest star Stephen Merchant, who serves the family during their vacation in "Las Vegas" in Season 5, Episode 18. He offers to draw a Michael Bublé bath, and if you keep an eye on Claire's iTunes playlist in "Connection Lost," you'll see that the singer's song "Haven't Met You Yet" is one of her most played tracks.

Watch Stephen Merchant as the "Bath Butler" in the "Las Vegas" episode of Modern Family:

5. "Andy Bailey Wanted For Arson" article
In the news article, the arsonist was reported shouting "I will set fire to the rain," which is a reference to Adele, the singer who Claire mistakenly thought had friended her on Facebook in Season 3, Episode 18, "Send Out the Clowns." The two people mentioned in the article (besides the wrong Andy Bailey) work on the show: "Notorious drug kingpin" Matthew Plassman is actually a writers production assistant and "Chief of Police" Dan Tipton is a production supervisor.