"The View" Returns for a Historic Season 20 on Tuesday, September 6

ABC News' "The View" is ramping up for an historic 20th season, beginning TUESDAY, SEPTEMBER 6 (11:00 a.m.–12:00 p.m. EDT).  New co-host Sara Haines joins "The View"'s panel of smart, engaging and talented women led by moderator Whoopi Goldberg. Haines joined ABC News in 2013 and currently appears on the weekend editions of "Good Morning America"as the pop news anchor. Co-hosts Joy Behar, Candace Cameron Bure, Paula Faris and Raven-Symoné all return for season 20, which promises to be a year-long celebration with the hottest topics, entertaining and provocative conversations, politics, newsmakers, celebrity guests and the people everyone is talking about. 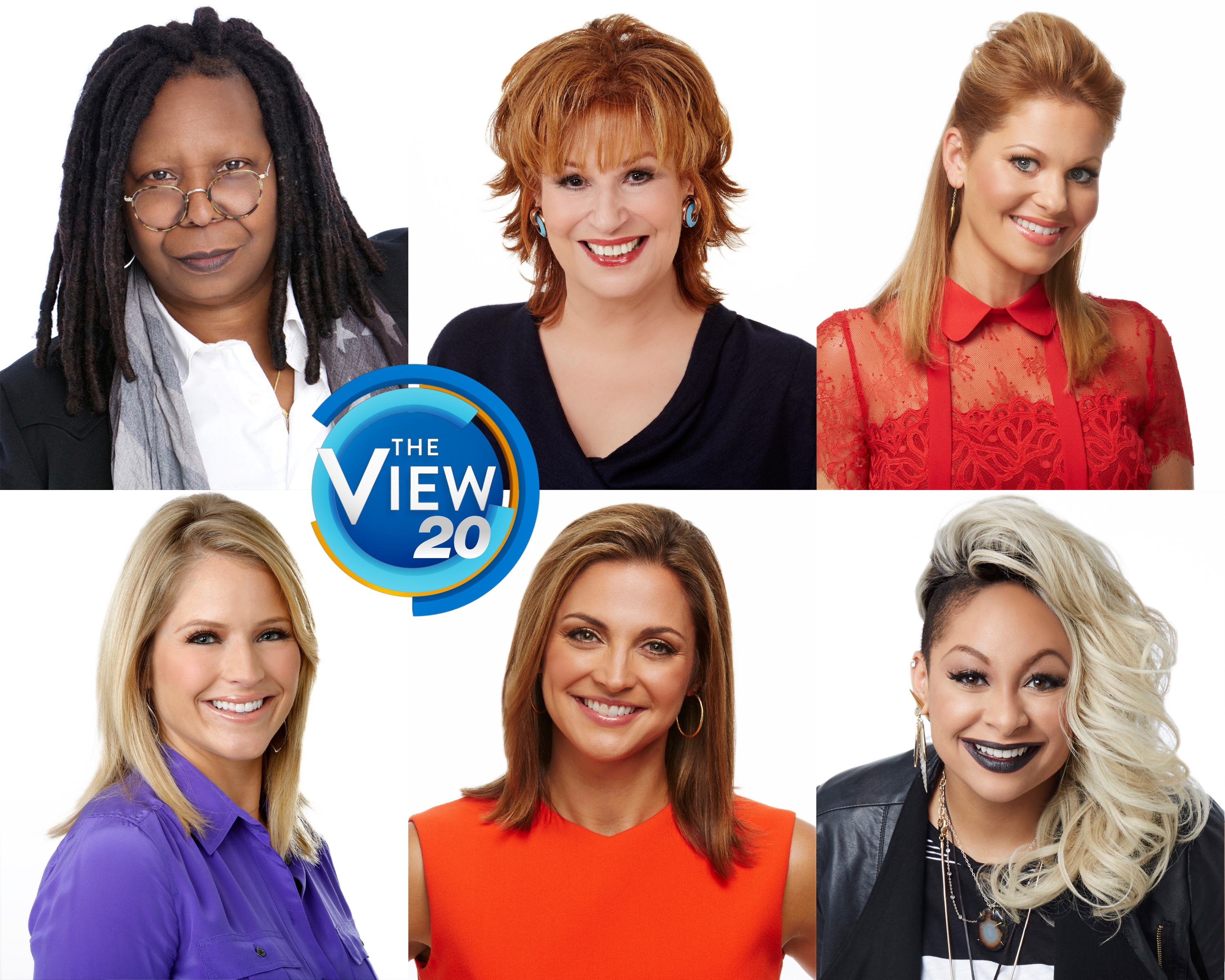 This fall the award-winning talk show officially welcomes two accomplished women familiar to "The View" audience:  Jedediah Bila and Sunny Hostin, who will appear frequently throughout the season. Bila joins the ABC family from Fox News, where she provided analysis of the 2016 presidential election for "Outnumbered" and "The Five" and appeared often in primetime with her trademark commentary on a wide range of political and cultural topics. Hostin will continue to cover the big legal stories of the day as the senior legal correspondent for ABC News. Since February when she joined the news division, she has reported on the Freddie Gray case, the deaths of Alton Sterling and Philando Castile, and the tragic attack on police in Dallas.


To kick off the next season of the long-running, popular daytime show, ABC will air "The View: 20 Years In the Making" on TUESDAY, AUGUST 23 (10:00-11:00 p.m. EDT). The primetime special, with the program's legendary creator Barbara Walters, will feature surprising stories from behind the scenes, favorite memories from celebrity fans, a look back at the show's most talked about moments and will welcome back co-hosts from the past 19 years.

"As we prepare for season 20 of 'The View,' we will take a look back at its remarkable history," said creator Barbara Walters. "In our primetime special, celebrating this event, you will see the legacy of the program. I am very proud of the show that I created almost two decades ago. We hope the viewers will take a little time to enjoy 'The View'."

"We have such a smart, funny and fearless group of women who bring unparalleled passion and opinions to the hot topics table every single day," said Candi Carter, executive producer of "The View." "We have an exciting season 20 planned and plenty of surprises in store."

Whoopi Goldberg (Moderator) – Goldberg has moderated "The View" since joining the show in 2007. She is one of a very elite group of artists who have won the Grammy, the Academy Award, the Golden Globe, the Emmy and a Tony. She is a prolific producer and well-known around the world for her many humanitarian endeavors. Born and raised in New York City, she performed in San Diego and the Bay Area with the Blake Street Hawkeyes theatre troupe. It was there that she created the characters which became "The Spook Show" and evolved into her hit Broadway show, Grammy Award-winning album and the HBO special that helped launch her career.

Joy Behar – Behar is among today's leading comic talents performing on the stage, film and television.  Along with the 2009 Daytime Emmy Award for Outstanding Talk Show Host, she is also the recipient of three MAC awards, a CableAce award, and a 2000 GLAAD award for her outstanding friendship to the Gay community. Behar has hosted her own shows, including a call-in radio show on WABC, "The Joy Behar Show" on HLN, and "Say Anything" on Current TV. She wrote and performed in her own solo show, "Me, My Mouth and I," at the Cherry Lane Theatre.  Behar has written four books, including two children's books. She will appear in Woody Allen's upcoming Amazon series.

Candace Cameron Bure – Actress, producer, New York Times' bestselling author and inspirational speaker. She is a devoted wife and mother of three, who is outspoken and passionate about her faith and her family. Known to millions worldwide from her role as D.J. Tanner on the iconic family sitcom "Full House," Cameron Bure continues to flourish in the entertainment industry as a role model to women of all ages. She is currently filming her leading role in the second season of "Fuller House," where she reprises her role as D.J. She is the author of three best-selling books, "Reshaping It All: Motivation for Physical and Spiritual Fitness," "Balancing It All: My Story of Juggling Priorities and Purpose" and "Dancing Through Life: Steps of Courage and Conviction," a reflection on the life lessons she learned while dancing her way to the finals on season 18 of "Dancing with the Stars." She also serves as the star and executive producer of the popular Aurora Teagarden Mystery Series on Hallmark Movies & Mysteries Channel.

Paula Faris – The Emmy Award-winning journalist has covered a wide range of subjects for ABC News, from the New England Patriots "deflate-gate" scandal and the men's World Cup in Brazil and the women's in Canada to the fatal Philadelphia Amtrak crash. Most recently she reported live from the RNC in Cleveland, Ohio, for "The View," and this spring she spoke exclusively with the eldest Duggar siblings following the Josh Duggar molestation scandal. In September 2015, she was the first journalist to sit down exclusively with Kentucky county clerk Kim Davis, who refused to issue marriage licenses to same-sex couples, and, earlier that year, she covered the red carpet and hosted "The Oscars Backstage" at the 87th Annual Academy Awards.  The mother of three and Michigan native has interviewed everyone from Reese Witherspoon and John Legend to Stephen Curry and Tiger Woods. She started her television broadcasting career as a reporter at WKEF/ WRGT-TV in Dayton, Ohio.

Sara Haines – Correspondent for ABC News and pop news anchor for the weekend editions of "Good Morning America." Prior to joining ABC News in 2013, Haines was part of the fourth hour of NBC's "Today Show," a position she held from 2009-2013. In 2008, she began online reporting as host of TODAYshow.com's entertainment video blog, "Backstage Pass," interviewing countless celebrity entertainers, actors and musicians for the blog. Haines joined "Today" in 2002 as a production coordinator.  Prior to joining NBC News, she was a member of NBC's Page Program. Haines graduated from Smith College in Northampton, Massachusetts, where she received a Bachelor of Arts in government.  She is a native of Newton, Iowa. She currently resides in New York City with her husband, Max, son Alec and dog Trixie.

Raven-Symoné – The actress/producer was named a co-host on June 10, 2015. The popular actress' recent credits include roles on ABC's hit comedy "black-ish," as well as featured roles on "Empire" and the upcoming animated feature film "Animal Crackers." She's widely known for her role as "Olivia" the Emmy Award-winning and critically acclaimed series "The Cosby Show," for which she received a Young Artist Award. She starred in the title role on the Emmy-nominated comedy series "That's So Raven" for Disney Channel, which garnered her three NAACP Image Awards, two Nickelodeon Kids Choice Awards and a Young Artist Award. She was named producer for the series' fourth season, which aired in 2007. In addition to her work in television, she has also had a viable career in music with four solo albums.

Jedediah Bila – Television host and commentator who joined the Fox News team in January 2013. Prior to that, she appeared regularly on MSNBC, CNBC, The Blaze, and a variety of radio shows. Her book, "Outnumbered," was published in May of 2011 and her widely published columns include such topics as culture, education, politics, relationships, media, fitness and more. The native New Yorker is a featured speaker for the Clare Boothe Luce Policy Institute and Young America's Foundation. She most recently spoke at New York University on campaign messaging, youth outreach and shifting cultural trends.

Sunny Hostin – Sunny Hostin returned to ABC News as a senior legal correspondent in February 2016. From 2007 to 2016, Hostin was a host and legal analyst at CNN. She covered many high profile trials, from George Zimmerman to Casey Anthony, and a number of other major stories, including the AME church shooting in Charleston and the selection of Eric Holder for Attorney General. She had her own weekly segment titled "Sunny's Law," to answer viewers' questions on a wide range of legal and social justice issues.  Prior to working at CNN, Sunny filled in as co-anchor for ABC News' "World News Now" and "America This Morning." She began her legal career as an appellate law clerk, trial attorney for the Justice Department and lastly a federal prosecutor. She received a Special Achievement Award from then Attorney General Janet Reno during her time as a federal prosecutor. Sunny graduated from Binghamton University and Notre Dame Law School. She currently resides in Westchester County with her two children and husband.

The ViewNews & BlogsView News"The View" Returns for a Historic Season 20 on Tuesday, September 6