Welcome to the Modern Family Recap of Season 7 Episode 4 "She Crazy" (Original Airdate October 14, 2015).  Phil was all in on project hatch-the-duck-eggs, even building a whole habitat for them -- no one else was as enthused about this project and Lily was the only one suckered into helping him. Claire, meanwhile, was nervous about pitching her new closet ideas to Jay and his creative team. And, Gloria and Manny helped each other out with their respective “crushes,” while Cameron developed an unhealthy attachment to the frat guys renting their upstairs unit.

Watch the full episode: She Crazy

Phil's Completed Duck Village
After finding duck eggs at a house showing in Episode 2 "The Day Alex Left for College," Phil decided to build a village for the ducklings to live in.  Phil showed off his completed duck village to Lily. Phil wanted Lily to build her smile rather than judge everything. Phil saved one of the eggs from danger after he accidentally set the nest on fire.

Phil's Duck Village|Lily helps Phil build a duck village.|Phil (Ty Burrell) shows off his completed duck village to Lily (Aubrey Anderson-Emmons). Phil wants Lily to build her smile rather than judge everything. Phil saves one of the eggs from danger after he accidentally sets the nest on fire. From Season 7, Episode 4 "She Crazy" of Modern Family ABC WEDNESDAYS 9|8c.

Building Manny's Confidence
Manny turned to Gloria for advice on how to approach a coffee barrista that he likes. Gloria told Manny to be more confident and just talk to the barrista.  Manny saw Gloria's confidence shatter when she can't talk to her favorite TV Actress.

Gloria Freezes Up|Gloria runs out of words after she is star struck.|Gloria (Sofia Vergara) gets Manny (Rico Rodriguez) to admit that he failed to talk to the coffee girl. Gloria gets tongue-tied when she tries to talk to her favorite actress. From Season 7, Episode 4, "She Crazy" of Modern Family ABC WEDNESDAYS 9|8c.

Luke's Driving Lesson/Mitchell's Therapy Session
While teaching Luke how to drive, Mitch turned it into a therapy session about Cam. Mitch figured out that Cam transformed himself in order to accommodate every guest renting their upstairs unit.

Cam the Chameleon|Mitchell figures out Cameron changes his personality for the guests.|While teaching Luke (Nolan Gould) how to drive, Mitch (Jesse Tyler Ferguson) turns it into a therapy session about Cam. Mitch figures out that Cam (Erica Stonestreet) transforms himself in order to accommodate each guest at their bed and breakfast. From Season 7, Episode 4, "She Crazy" of Modern Family ABC WENDESDAYS 9 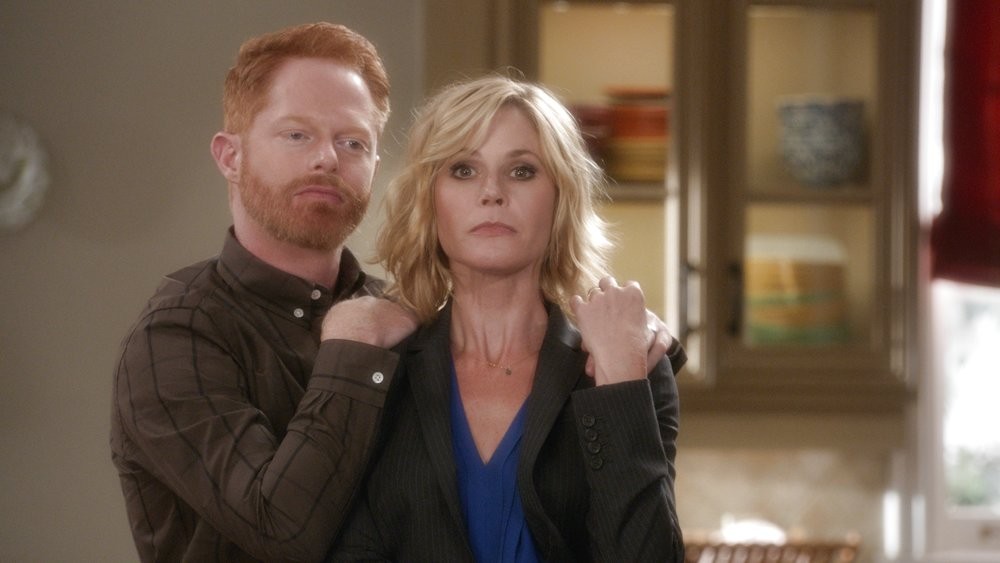 From Gloria's failure to talk to her celebrity crush, Manny was able to gain enough confidence to ask the coffee barrista to get coffee. Cam finally realized he was changing himself in order to get approval from every guest they had in their upstairs unit.  Claire was at home when the ducklings finally hatched.  In the beginning of the episode, Dylan mentioned how ducks imprint themselves on the mother/provider when they first hatch.  Phil was jealous that the three ducklings imprinted themselves on to Claire.  We'll have to wait and see if the ducklings continue to follow her next week.

Get Ready for Halloween!  Check out the costumes past Halloween costumes from Modern Family.