Welcome to the Week 9 recap of The Bachelor 2020, where everything is crazy, the drama is bonkers, and at least one bachelorette—Madison—seems like she might be ready to just drop the whole thing right at the end. And by "the whole thing," time will tell whether or not that means Bachelor Peter Weber's heart. Usually the only tears at this point in the season are from the ladies being sent home—but Peter's watched plenty of his own tears fall recently, and it looks like plenty more are on their way. As always, there are copious Bachelor spoilers below, but you can watch the full episode of The Bachelor season 24, episode 9 right here on ABC.com or in the ABC app—or read on to see who said "yes" to the Fantasy Suite, what that might mean for the other relationships, and how exactly Madison decided to walk away.

As the Rose Ceremony on Los Angeles wrapped up at the end of Week 8, everyone knew what was coming up next: the Fantasy Suites. And by now, everyone knows what sorts of things can happen in the Fantasy Suites/Windmills. But for Madison, whom we just found out is saving herself for marriage, the Fantasy Suites are much more complicated, more like a peer pressure of sorts that makes her more than a little bit uncomfortable. So she grabs Peter to explain that, and explain why:

WATCH: Madison warns Peter that if he sleeps with other women, she's not sure she can continue

Is that an ultimatum? It's hard to say. Peter asks her to clarify, but by the end it seems more like Peter just knows that Madison cares and that it's probably hard for her to see him date other women. But either way, Madison might have meant it more as an ultimatum than Peter—and even she—suspected.

Let the Awkwardness (And Okay, Fine, Also the Romance) Begin

The gang packs up and heads to Gold Coast, in Queensland, Australia, and right off the bat, things get weird. For the first time ever, the three ladies will be bunking together during Fantasy Suite week, which ensures that everyone will be keenly aware that when someone's not in the house, they're with Peter, and since they're staying overnight with no cameras, well...the imagination runs wild. So when they do finally return home, that should be a fun conversation for all.

Hannah Ann gets the first date, and she and Peter spend the day on jet skis, blasting around in the ocean. Things get emotional quick with these two:

WATCH: Hannah Ann tells Peter she'll be there for him no matter what

Hannah Ann says she's being fully open with Peter and and going for it. She understands this whole thing is complicated, and she's knows there are still other women in the picture, but she says she'd rather go all in and get her heart broken than regret putting herself all the way out there and wonder what could have been. She says yes to the Fantasy Suite.

Storm Clouds Gather for Pretty Much Everyone

Hannah Ann arrives and the three ladies have a brutally awkward conversation, asking how it went, and Hannah Ann tells them it was "fine" and "good" and "well" and other super vague adjectives that make it clear she doesn't want to tell them any details just as much as they don't actually want to hear any details. While Victoria F. heads off for her date which she hopes will go better than her disastrous hometown date, Madison tells Hannah Ann about the non-ultimatum-but-maybe-ultimatum she gave Peter in LA. Hannah Ann can't believe it:

We don't know if Hannah Ann and Peter went full windmill on their date, but if they did, that must have been a fun conversation for Hannah to be having with Madi.

Meanwhile, Victoria F. and Peter are having a good day, discussing their complicated relationship, but avoiding any major pitfalls. Until the topic of communication—their relationship's achilles heel—arises:

WATCH: Peter Tells Victoria F. to stop pushing him away

They manage to salvage this one, but it's clear there are still some tensions there. They say "yes" to the Fantasy Suite, and in the morning Peter and Victoria say they feel like the Fantasy Suite brought them to about as good as place as they've ever been. Victoria says she's in love with him.

Madison's Blowout with Peter Over Sex

Madison and Peter spend the day strapped to the top of a skyscraper 900 feet above the ground, like most normal dates: 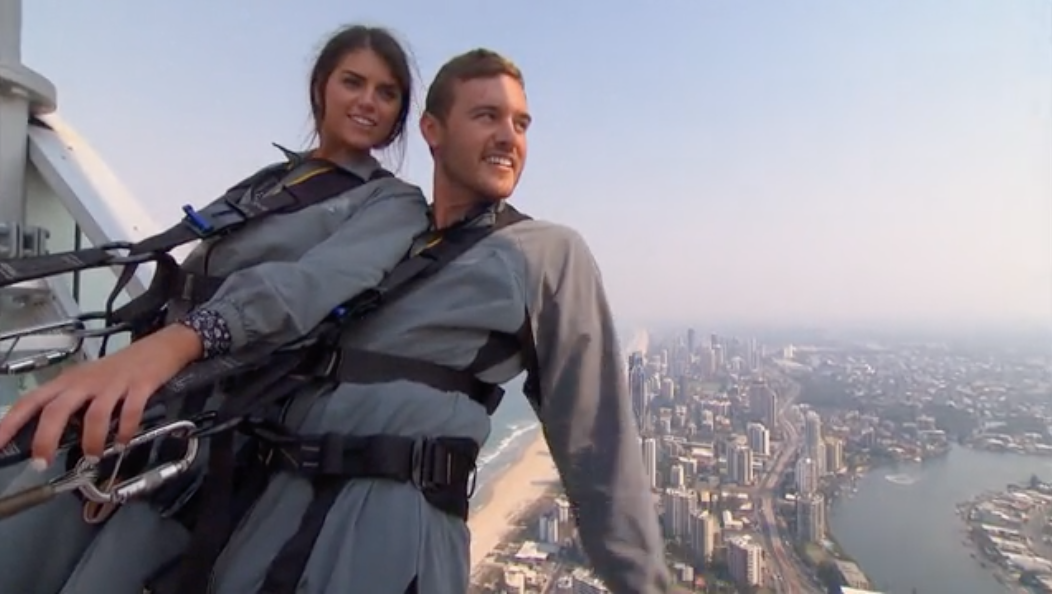 Madison says she's in love with Peter. Everything is going well thus far. Back at the house, Hannah Ann tells Victoria about Madi's stance on Peter's love life, and Victoria is irritated, saying that Madi might be putting Peter on the spot in an unfair way.

And that night, Madison does indeed quickly steer the conversation to that most cringey of dinner topics, which is of course The Sex Your Boyfriend Is Having with Other People. The proceedings quickly turn unpleasant, because unfortunately for Madison, Peter has indeed gone Full Fantasy Suite:

WATCH: Peter tells Madison he's been intimate with other women

"I have been intimate, and I can't lie to you about that." For Peter, it doesn't change how much he cares about Madison—but Madi says that while she's found a way to make peace with her boyfriend kissing other ladies, her boyfriend having sex with other ladies might be a bridge too far. It seems that Peter took their conversation back in Los Angeles to simply mean that she was really into him and that she just didn't want him to sleep with anyone else, because, well, obviously, that's no one's first choice. But he wanted to fully explore the other relationships, and now it seems that Madison meant to draw a brighter red line than he understood.

Madi's crying alone outside. Peter's crying alone inside. She feels she made her point clear, and then Peter went ahead and slept with one or both of the other women anyway. She's frustrated with him, mad at him. Peter doesn't want to lose her. They talk outside, hugging and expressing their strong feelings for one another—but then Madison walks away.

And that's the end.

So we'll have to wait to see what this means for these two, which you'll get to see next week before the Women Tell All gets going. So who are the final two on The Bachelor? We don't know yet, but based on this new Bachelor sneak peek for the rest of the season (including the Bachelor finale 2020), Madison's chances are not looking good:

WATCH: A sneak peek at the dramatic end to The Bachelor 2020